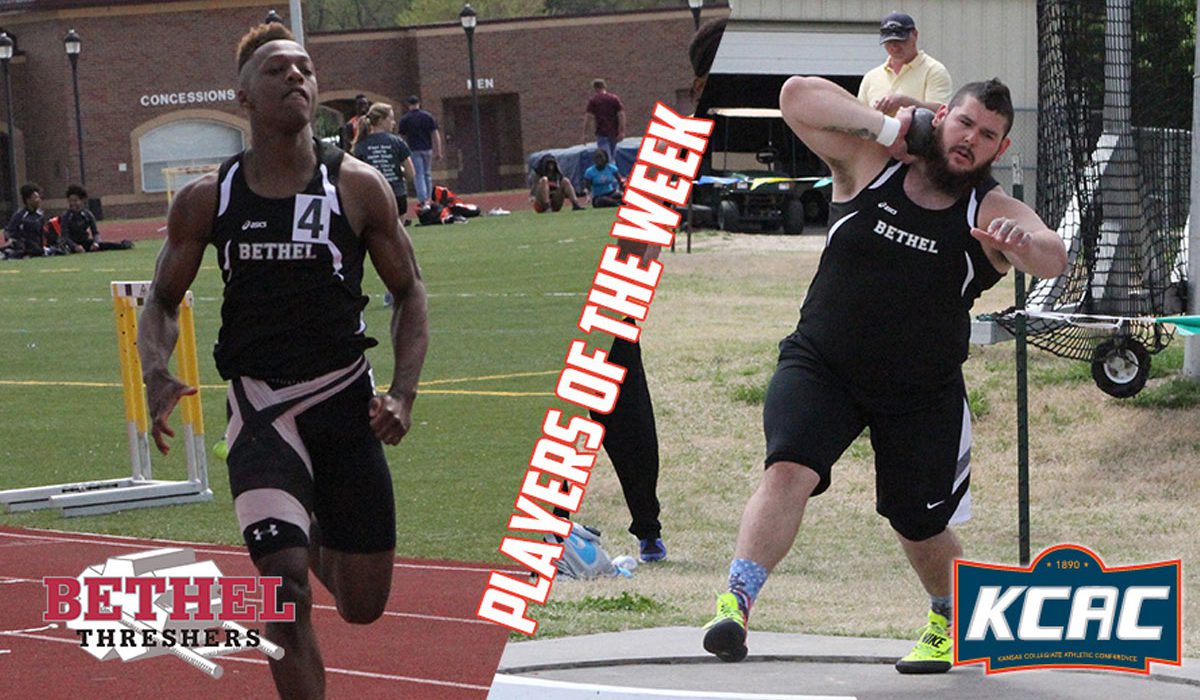 WICHITA, Kan. – The Kansas Collegiate Athletic Conference has released their selections for this week’s Men’s Outdoor Track & Field Athletes of the Week. For the first time this season, one single school has swept both of these awards, with Bethel College’s Bruce Rosario (FR/Pollacksville, N.C.) and Kyle Wilson (JR/California City, Calif.) being the honorees. This is Rosario’s first time receiving the award this season after placing in the Top 10 in two events on Saturday. Wilson has now been selected the  Male Field Athlete of the Week for the second consecutive time, after another record breaking performance in the shot put and qualifying for nationals in discus. This award is nominated and voted upon by the conference sports information directors.

Rosario was the top Thresher speedster at the Bethel Invitational on Saturday. He recorded 10th place finishes in both the 100 (11.15) and the 200 (22.39) Meter Dashes, and was part of the 4×100 Relay team which turned in a season-best 43.46 seconds. Rosario is no stranger to speed, as he had previously broken the school’s Indoor 60 Meter Dash record this season (before being topped by teammate Gary Jolivet (JR/Arlington, TX) later in the year).

It took 61 years to break the Bethel men’s shot put record, but Kyle Wilson has topped it twice in the last two weekends. This included Saturday’s home meet at Thresher Stadium, where Wilson beat his already established national automatic qualifying mark with a new best of 16.01 meters (52’6.5″). This throw is the best in the KCAC, and currently 10th best in the NAIA. He also was able to hit the ‘B’ Standard in Discus, which he won with a throw of 48.04 meters (157’7″). This is also the best in the KCAC this season.