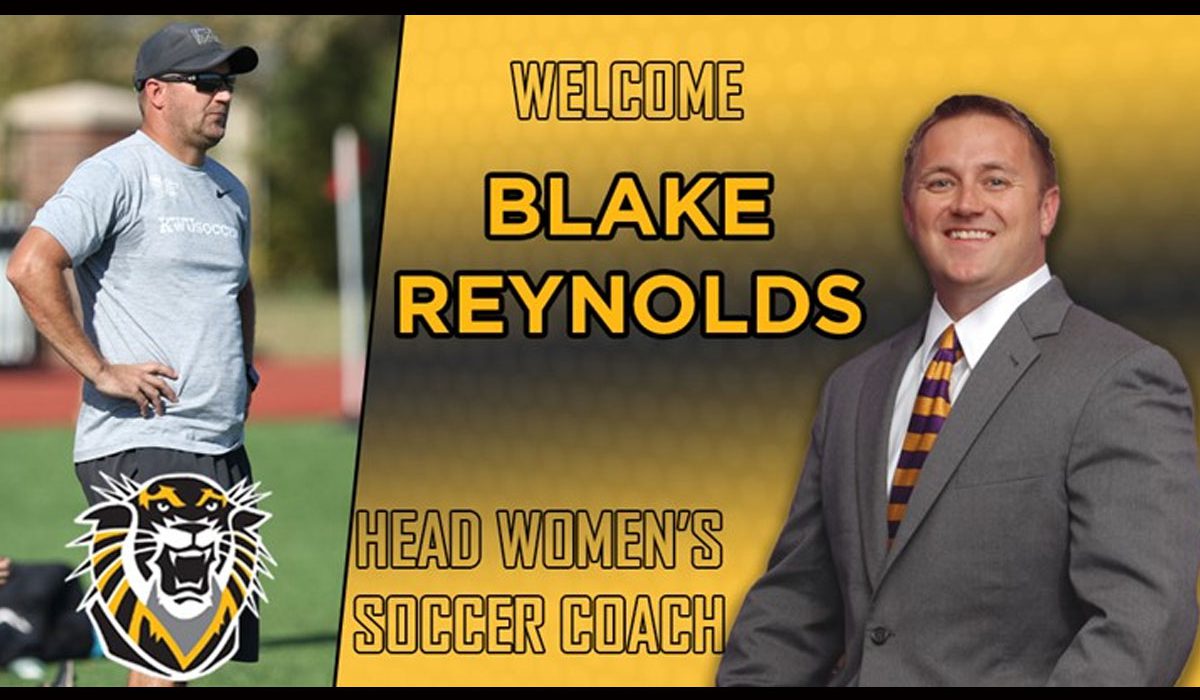 He has eight total years of head coaching experience at the NAIA level. A press conference to introduce Reynolds as the new head coach is scheduled for Tuesday, January 17 at 5 pm inside the Victor E. Lounge of Gross Memorial Coliseum.

Reynolds had great success at Kansas Wesleyan, where he compiled an overall record of 57-16-12 from 2013 to 2016. He guided the Coyotes to Kansas Collegiate Athletic Conference regular season championships three times, including outright titles in his first two seasons and most recently a share of the championship in 2016.

The Coyotes were a force in KCAC play, putting together a conference record of 35-2-2 over the four seasons. He led Kansas Wesleyan to a KCAC Tournament Championship in 2015, making a total of four KCAC Championships under Reynolds’ guidance. Reynolds was named the NSCAA Regional Coach of the Year in 2015.

Kansas Wesleyan appeared in the NAIA Women’s Soccer National Tournament twice under Reynolds in back-to-back seasons of 2015 and 2016. The 2015 squad advanced past the opening round to make the final site of the tournament in Alabama. In his time at KWU, he coached 7 All-America, 10 all-region, and 33 all-conference selections, along with three KCAC Most Valuable Players and three KCAC Newcomers of the Year. He had seven student-athletes earn Daktronics-NAIA Scholar Athlete honors and one earned CoSIDA Academic All-America honors.

Prior to Kansas Wesleyan, Reynolds was head coach at Midland University in Fremont, Nebraska for four years from 2009 to 2012. At Midland, he compiled an overall record of 45-26-7 and a Great Plains Athletic Conference mark of 31-10-2, finishing in the top three of the conference standings all four years.

n 2009, he led the school to its first-ever NAIA National Tournament appearance, a year that saw his team win 16 matches. He coached over 30 all-conference selections and one All-America selection at Midland. After his four years as coach at Midland, Reynolds served as Director of Soccer Operations at Oglethorpe University in Atlanta, Georgia before taking the head coaching position at Kansas Wesleyan.

Reynolds had three years of assistant coach experience at his alma mater, Baker University (Kan.), prior to his first head coaching job at Midland. He was the men’s assistant for two years and the women’s for one. In 2008, he helped guide the men’s squad to a conference tournament championship and reach the NAIA National Tournament. He started his collegiate coaching career at South Dakota State University in 2006 as an assistant coach, helping SDSU to its first ever championship that season, defeating IUPUI in the title game of the United Soccer Conference Tournament.

A native of Bellevue, Washington, Reynolds graduated from Baker University in 2003 with a degree in psychology. He then obtained a master’s degree in sport pedagogy from South Dakota State University in 2009. In his collegiate playing career at Baker, Reynolds was a standout center-midfielder. He was a three-time All-Heart of America Conference First Team selection and three-time All-Region V selection, while helping Baker win two HAAC conference championships and a region championship, while making two region final appearances.

During his senior season, Reynolds helped the Wildcats to their first-ever national tournament appearance and was rewarded as an NAIA & NSCAA Honorable Mention All-America selection. He is also a member of the Baker University Soccer Hall of Fame, named to the school’s All-Time Starting 11 Team to commemorate 20 years of rich soccer tradition. Reynolds has accomplished the unique feat of reaching the NAIA National Tournament as a player, an assistant coach, and a head coach.

Reynolds takes over a Fort Hays State program that is coming off an MIAA Regular Season Championship and its second appearance in the NCAA Tournament, where it reached the Central Regional Final (Round of 16), the best finish in program history. He follows Craig Shaw, who guided the program for its first six seasons before taking the head women’s soccer coach position at Texas A&M-Corpus Christi.