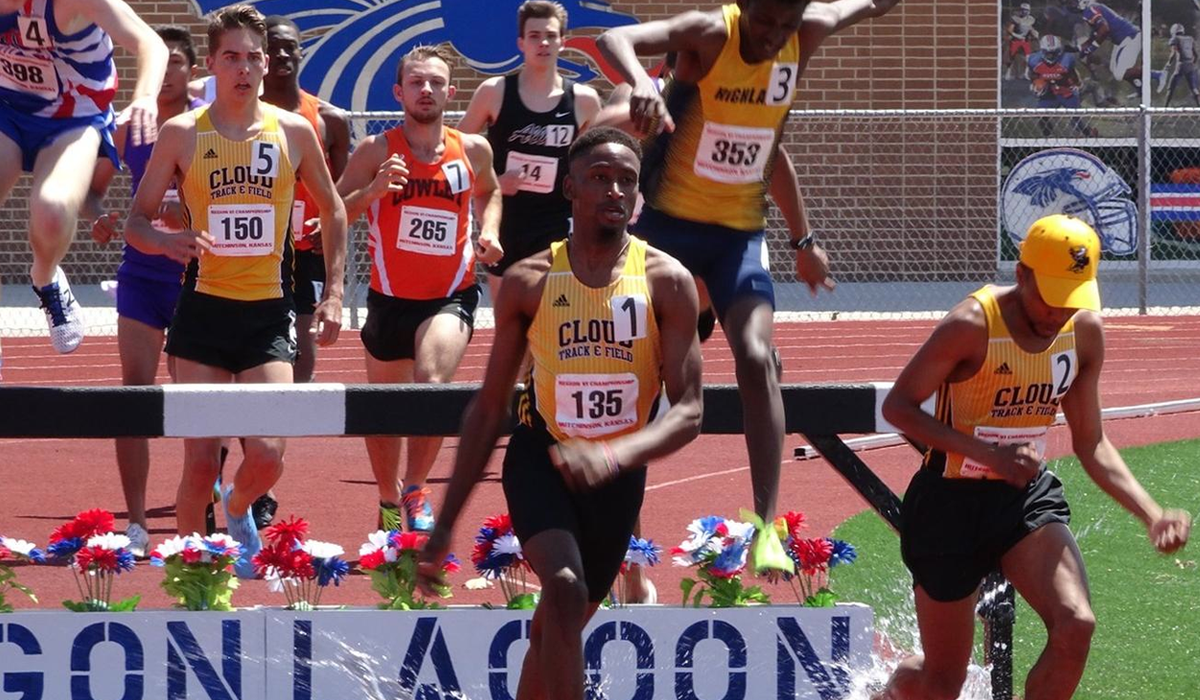 CONCORDIA — The open parking spaces and quietness throughout the Cloud County Community College campus suggests it’s summer break. At least for most students.

But work remains for members of the Cloud County track and field teams as the T-Birds gear up for the NJCAA National Outdoor Track and Field Championships, set for this Thursday through Saturday in El Dorado, Kansas.

Cloud County, which enters the weekend ranked No. 3 on the men’s side and No. 7 in the women’s USTFCCCA poll, will be sending a total of 34 student-athletes — 20 men and 14 females — to the Butler Community College campus, all eyeing a podium finish and national title.

“We’ve got enough athletes qualified that, if we can get the jobs done, we could score enough points to be up in that trophy count,” said Cloud County head men’s coach, Harry Kitchener. “I think we have a shot at being in that top three if things go right.”

The men’s team will look to do the bulk of its scoring in the middle distance, long distance and relay races. Sophomore distance runner Moses Dirane, the defending national champion in the 3,000-meter steeplechase with a time of 9:18.99, will be one of the many T-Birds who will be at the center of the team’s push.

Sophomore thrower Gabbreil Harris headlines a strong group of throwers that will be representing the Cloud County women’s team as she heads into the national meet ranked No. 1 in the discus (171’7), an event won last season by Cloud County alumnus and current University of Minnesota star, Nayoka Clunis.

Harris, and freshman teammate Avi Bulai, also figures to be in the hunt for a national title in the hammer throw event. Harris is ranked No. 2 going into the weekend and Bulai, the 2018 Region VI/KJCCC champion in the event, is ranked fifth.

The T-Birds should also be in the mix in the women’s javelin as they have three athletes — Shanee Angol (No. 2), Carley Nelson (No. 8) and Falon Kickhaefer (No. 9) — currently seeded inside the top-10, and freshman Takyra Hilton is a threat ranked No. 7 in the women’s shot put.

“All the throwing events are strong and we should hopefully have people on the podium in all four events,” said Cloud County head women’s coach, Ted Schmitz.

The Cloud County men’s team could make some noise in the javelin event, as well, as Kitchener said he believes freshman Jerrod Hoover, ranked No. 5 nationally, could be a dark horse this weekend.

“He threw 192 feet a couple weeks ago and last year that mark placed pretty high,” Kitchener said. “Jerrod should be in good shape to do well.”

In addition to the throwing events, Cloud County has a handful of athletes in prime positions to finish high on the podium.

Freshman jumper Kyle Alcine ranks No. 3 in the high jump, and fellow freshman jumper Peter Ackah goes in at No. 7 in the long jump and No. 9 in the triple

In the 800-meter run, sophomore Ariel St. John will look to improve on her seventh-place finish at the national meet last season as she is ranked No. 4 in the event. On the men’s side, Marindich, who was a third-place finisher last season, is ranked sixth.

Sophomore sprinter Jatoria McGirt, this year’s national indoor champion in the 100-meter dash, is another competitor who could bounce back onto the national scene this weekend.

After a late start to the spring season, McGirt put herself in position to challenge in the 100-meter dash, 200-meter dash, and as a member of the women’s 4X100-meter relay team of Ageonia Wilkerson, Myflore Methelus and Precious Posey.

The NJCAA National Outdoor Track and Field Championships will get underway at 9 a.m. on Thursday at BG Products Veterans Sports Complex with the first four events of the women’s heptathlon and men’s decathlon.

Cloud County will have four athletes competing in the combined events in freshman Nikki Kraaijeveld, ranked No. 5 heading into competition, and the men’s trio of Robson Yinambe(No. 6), Louis Humbert (No. 7) and Tanner Brown (No. 16).

Live video for all of the weekend’s action is available for purchase through FloTrack.org.