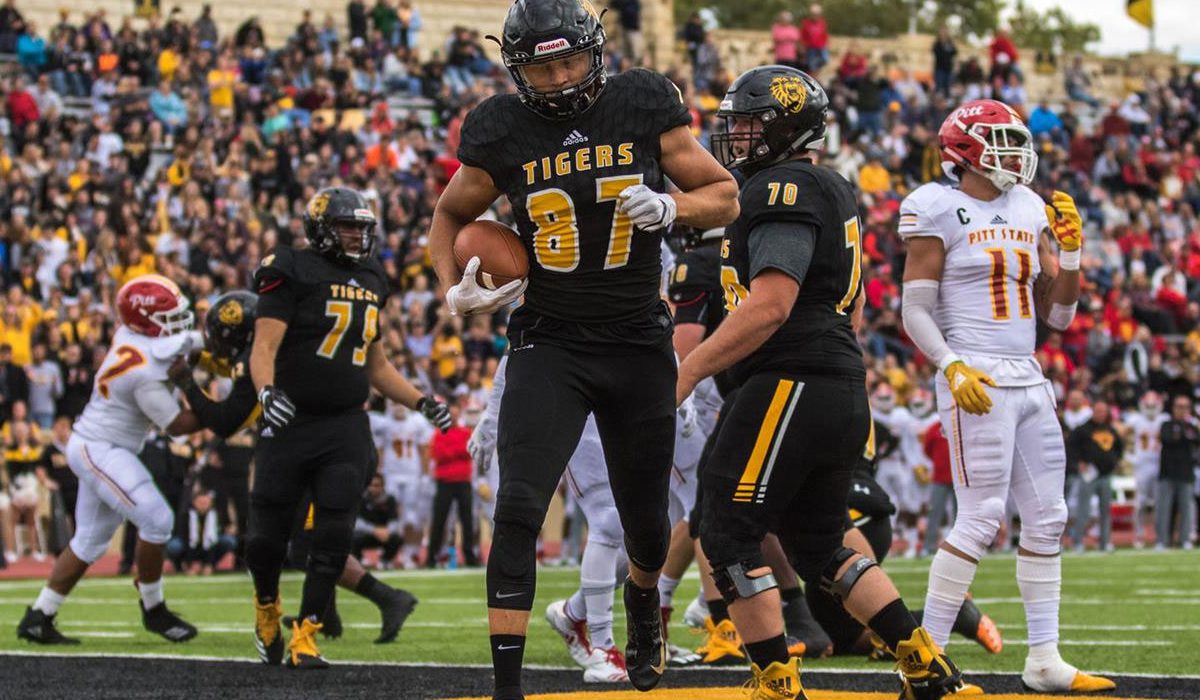 HAYS – It took only 27 seconds on the clock for Fort Hays State to open a 9-0 lead on Pittsburg State on Saturday (Oct. 13). The Tigers ultimately went on to a 50-21 win, pulling the No. 18 ranked Gorillas back into a tie with them for second place. Fort Hays State has now taken four of the last five meetings with Pittsburg State and the 29-point margin of victory was the largest in the all-time series history for FHSU.

The Tigers led 12-7 after one quarter, but Pittsburg State took its only lead of the game with a touchdown at the 14:22 mark of the second quarter on a Tyler Adkins 20-yard touchdown run. However, the Tigers regained the lead with a 59-yard touchdown pass from Jacob Mezera to Matt Wendelberger and never looked back, building a 26-14 lead by halftime. The Tigers outscored the Gorillas 24-7 in the second half for the dominating 50-21 win, the largest margin of victory for them in the all-time series history.

Mezera broke both the FHSU career records for passing yards and passing touchdowns. He was very efficient on his nine completions for the afternoon, finishing with 231 yards and three touchdowns in the game. He passed the school records of 7,014 passing yards held by Mike Garrison and 55 touchdowns held by Treveon Albert. Mezera now has 7,083 passing yards and 56 passing touchdowns in his career. His 75-yard touchdown pass to Harley Hazlett on the first play of the game sparked the Tigers right out of the gate, just before they added a safety from Malik Young to lead 9-0 at the 14:33 mark. Mezera’s 34-yard touchdown pass to Layne Bieberle in the third quarter at the 2:23 mark pushed the Tiger advantage to 36-14.

The Gorillas surrendered a season-high 461 yards to the Tigers. FHSU finished with 357 passing yards and 104 rushing yards. Chance Fuller and Harley Hazlett also got into the throwing act alongside Mezera. Fuller finished with 98 yards on 6-of-7 passing, while Hazlett connected on his one pass of the day to Fuller for 28 yards. Hazlett was also key in the Tiger rushing attack, running the ball four times for 20 yards with a touchdown. Charles Tigner had the other Tiger rushing touchdown and finished with 27 yards. D.J. Hickman led the Tigers in rushing with 60 yards on 13 attempts.

Bieberle finished the day with a team-high 119 receiving yards on just four catches, while Hazlett had 81 yards on just two catches. Hazlett finished with 101 all-purpose yards with his rushing total added, and had that 24-yard pass completion to add to his stat sheet stuffing performance.

The Tigers forced the Gorillas into five turnovers, including three interceptions and two fumbles. Interceptions went to Doyin Jibowu, Kolt Trachsel, and Jordan Starks. Jibowu’s interception put the icing on the cake for FHSU, a 22-yard return for a touchdown with 4:12 remaining in the game. Wyatt Parker’s strip-sack caused a fumble Jose Delgado scooped and ran 34 yards to the PSU 2-yardline near the end of the third quarter. That set up a Tiger touchdown early in the fourth quarter that made the score 43-14, giving the Tigers 31 unanswered points. Delgado finished with a team-high 12 tackles and a sack. Along with his safety on Pittsburg State’s first play from scrimmage, Malik Young finished with a season-high 11 tackles for the Tigers from his defensive tackle position. Keylon Kennedy also reached double figures in tackles with 10.

Pittsburg State finished with 170 rushing yards as a team, but entered the game averaging 220.7. Tyler Adkins had a team-high 55 yards on 20 carries. John Roderique threw for 178 yards, completing 21-of-37 attempts with two touchdowns, but also threw two interceptions. He ran for 40 yards in the game. Lorenzo West caught 13 passes for the Gorillas for 96 yards. Creighton Sanders led the Gorillas in tackles with 11.

Fort Hays State now turns its focus to a much-improved Nebraska-Kearney team next Saturday (Oct. 20) on the road. Kickoff is set for 11 am in Kearney. The Lopers are now 4-3 overall after a 27-13 loss at Northwest Missouri State on Saturday. The Tigers look to even their road record for the season, just 1-2 away from Hays so far.

With the win, the Tigers pulled the Gorillas back into a tie for second place in the MIAA at 5-2 each. Northwest Missouri State now has sole possession of the conference lead at 6-1.