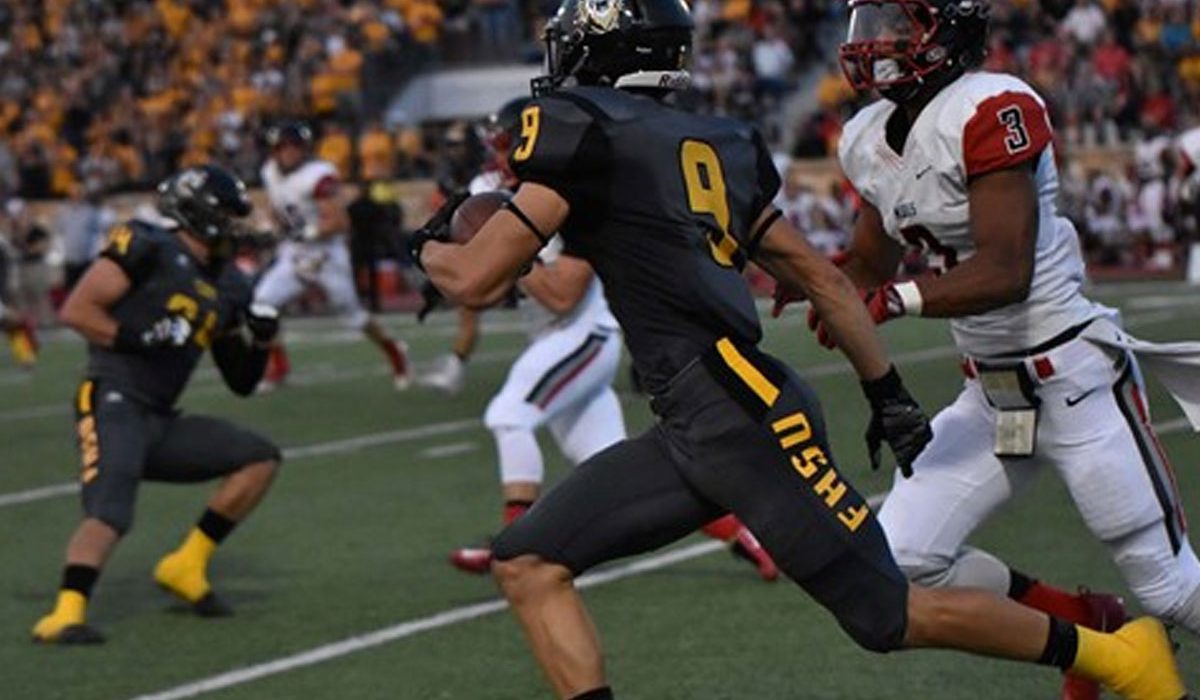 HAYS – After a blowout win in Week One, Fort Hays State was handed a test against the No. 13 team in the nation in its home opener Thursday night. The Tigers passed the test with flying colors, handling Central Missouri by a score of 35-6 to move to 2-0.

The Tigers picked up their first win over a ranked team since November 14, 2015, when they also beat Central Missouri. The Mules were No. 20 at the time. It was the highest ranked team defeated by the Tigers since September 27, 2014, when they defeated a No. 8 ranked Pittsburg State team in Pittsburg.

The Tigers scored on the first drive of the game and never trailed all night, methodically working their way to a 21-3 lead at halftime. Following an early field goal in the second half by Central Missouri, a 71-yard touchdown strike from Jacob Mezera that hit a streaking Layne Bieberle for a touchdown squelched any doubt of the Tigers controlling the game throughout. The Tigers added another touchdown later between Mezera and Bieberle in the third quarter, which capped the scoring and a 29-point win.

The opening drive set the tone as tight end Drew Kite, a three-year member of the basketball squad at FHSU, grabbed a pair of 11-yard passes for key first downs. Kenneth Iheme capped the drive with a 31-yard touchdown run around the right end, tip-toeing the sideline for the final few yards to push FHSU to a 7-0 lead just under four minutes into the game.

The Tiger defense stood tall early in the game, allowing just 27 yards of total offense and two first downs to the Mules in the first quarter. The Tigers made it 14-0 early in the second quarter when Harley Hazlettrushed a ball in the endzone from a yard out on fourth down. On their next drive, the Tigers converted a key 4th-and-1 situation from the UCM 45-yardline and then Monterio Burchfield had a catch of 16 yards and Bieberle a catch of 22 yards to get the Tigers deep in Mule territory again. Burchfield capped the drive by leaping up over a defender for a 4-yard touchdown catch from Mezera, making it 21-0.

Central Missouri got on the board with a 34-yard field goal at 3:16 remaining in the half and drove the ball deep in Tiger territory just before halftime. But the Tiger defense was up to the task again on 4th-and-9 from the FHSU 16-yardline, forcing a turnover on downs.

The Mules tried to reverse the momentum with a methodical 14-play, 71-yard drive to open the second half, but it only produced a 21-yard field goal. Two plays later, Mezera found Bieberle for the 71-yard bomb and the Tigers never looked back. The Tiger defense forced two consecutive 3-and-outs and the offense tacked on another touchdown with a 7-yard strike between Mezera and Bieberle at the 3:45 mark of the third quarter.

Bieberle produced his second career 100-yard receiving game, finishing with 107 on four catches. Tyler Bacon was the team leader in receptions for the game with six, adding 43 yards. Mezera threw for 227 yards on 18-of-31 passing with three touchdowns. Charles Tignerled the Tiger rushing attack with 70 yards, while Iheme added 65 yards and his touchdown.

On defense, Aquil Knowles led the Tigers with eight tackles, while Jose Delgado, Tanner Hoekman, and Nathan Shepherd each tallied seven. Shepherd stuffed the stat sheet with a sack, three tackles for loss, and a forced fumble. Doyin Jibowu and Kamon Clayton combined for 11 tackles and each had two pass break-ups. Sheldon Schmidt and Wyatt Parker also recorded one sack each. The Tigers stifled the Mule rushing attack, allowing just 31 yards and forcing the Mules to throw the majority of the game. FHSU is allowing an average of just 56 yards per game on the ground so far, holding an opponent under 100 yards on the ground for the second straight game.

Brook Bolles threw for 273 yards on 29-of-53 passing for UCM, while Jaylen Zachery, Kyrion Parker, and Seth Hebert each had seven catches to combine for 211 of the team’s receiving yards. Jackson Newman led the Mules in tackles with 10.

The FHSU defense held an opponent under 10 points for the second straight game, allowing just an average of 6.5 points so far this season to lead the MIAA. The Tigers are allowing just 261.5 yards per game. On the flip side, the Tiger offense holds the conference scoring lead so far, averaging 41.5 points per game.

Fort Hays State will now had two extra days of preparation for its first Saturday contest of the season, a meeting with Central Oklahoma in Edmond on September 16 at 7 pm. The Bronchos play on Saturday this week at Pittsburg State, the only MIAA game not on Thursday night in week two. UCO is 1-0 so far this year.