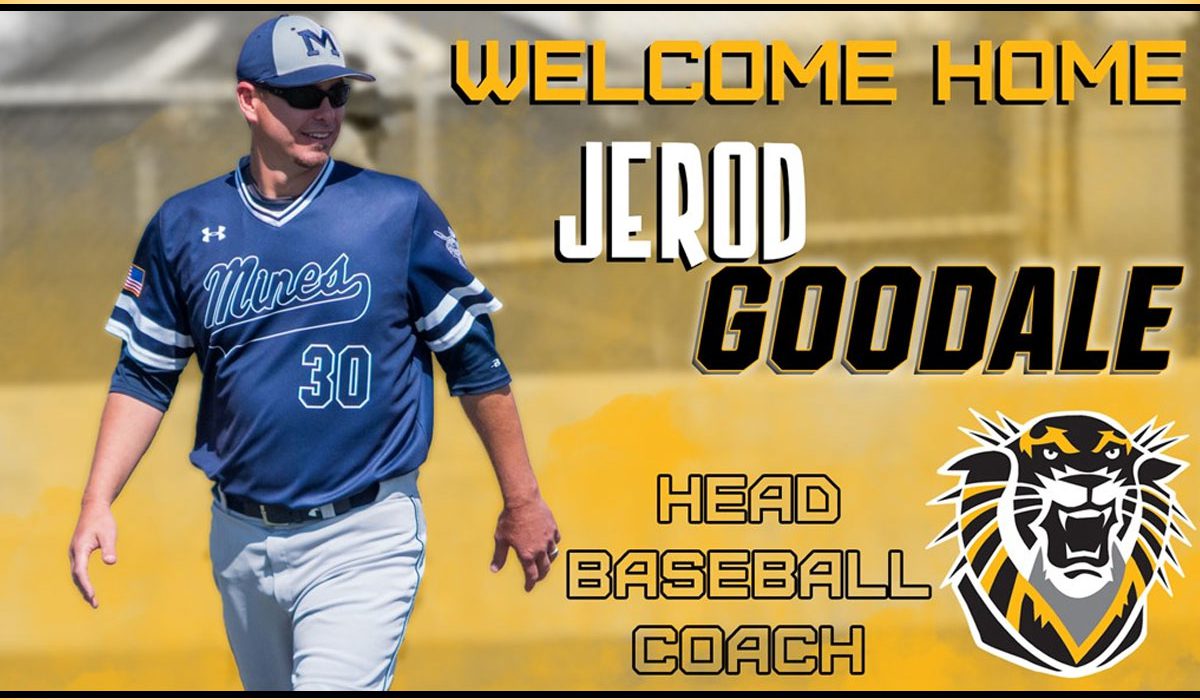 HAYS – Fort Hays State University Director of Athletics Curtis Hammeke announced the hiring of Jerod Goodale as head baseball coach on Thursday (May 31). A native of Hays and alumnus of Fort Hays State University, Goodale returns to guide the program where his collegiate baseball journey began. He becomes the 15th head coach in the program’s history.

“Today is a special day for myself and my family. I am truly honored and grateful to lead the baseball program at Fort Hays State University and would like to thank Curtis Hammeke for providing me this opportunity,” said Goodale. “I am proud of what we accomplished at Colorado School of Mines during the past seven years, but Hays is home, it’s where I grew up, went to school, met my wife, and started my coaching career. My hope is that I can give back to FHSU and the community of Hays as much as its given to me and my family. I am excited to start the process of bringing our program back to a championship caliber level and look forward to putting in the work to make that happen.”

Over the last seven seasons (2012-18), Goodale was head coach at Colorado School of Mines where he built the baseball program into a conference and national contender. Taking over a program that had 12 consecutive losing seasons before his arrival in Golden in the fall of 2011, Goodale ended a streak that reached 14 years by guiding the program to a 24-23 mark in his third year (2014). The last three seasons (2016-2018), Colorado School of Mines vaulted into one of the top programs in the Rocky Mountain Athletic Conference by winning an average of 33 games per season. The 2017 and 2018 seasons were the only years of 30 or more wins in the program’s history, culminating with it’s first-ever NCAA Tournament appearance in 2018.

The Orediggers finished the 2018 season 37-18 overall and touted two All-America selections, including RMAC and South Central Region Player of the Year Mikey Gangwish. The two seasons prior, the Orediggers produced records of 29-15 and 32-22. Colorado School of Mines reached the RMAC Tournament Championship Finals in each of the last two years and came up just one win shy of playing for the South Central Regional Championship in 2018. Colorado School of Mines reached the RMAC Postseason Tournament only two times in the program’s history prior to Goodale’s arrival, but qualified six of seven years with him at the helm.

“Jerod has established himself as a successful baseball coach and draws from several experiences that have led to his growth,” said Fort Hays State Director of Athletics Curtis Hammeke. “We look forward to Jerod continuing on his path of success here at Fort Hays State University.”

Prior to his first head coaching position, Goodale spent two years (2010-2011) as an assistant coach and recruiting coordinator at Angelo State University in San Angelo, Texas, where he helped the program to 59 wins. Before that, he served as an assistant coach at Wichita State University for three years (2007-09) primarily working with catchers, while in charge of opponent scouting reports and assisting with hitters and defense. He helped the program to a 131-66 overall record, five Missouri Valley Conference Championships (three regular season, two tournament), and NCAA Tournament appearances all three years, reaching the Super Regionals twice.

Goodale began his collegiate coaching career at Fort Hays State University, where he served as an assistant coach for two years (2005-06). He served as pitching coach and helped guide the Tigers to an NCAA Tournament appearance in 2006, the last time the program reached the national tournament. The pitching staff in 2006 set an RMAC record for lowest team earned run average (3.65), while boasting the RMAC Pitcher of the Year. Fort Hays State had a record of 76-39 over his two years as an assistant.

Goodale’s coaching resume also includes summer stints as an assistant with the Liberal (Kan.) Bee Jays in 2007 and the Thomasville (N.C.) Hi-Toms in 2005.

Goodale was a student-athlete at Fort Hays State University, playing from 2001 to 2004. He was a two-year captain and two-time all-conference performer at catcher, helping the Tigers to the RMAC regular season and tournament championships in 2003. The 2003 team hosted the West Regional of the NCAA Tournament. He helped the team to an overall record of 157-66 in his time at FHSU as the team won at least 30 games all four years and eclipsed the 40-win mark twice. He served on the Student-Athlete Advisory Committee from 2002-2004. Goodale enjoyed summer collegiate league stints as a player with the Clarinda (Iowa) A’s and the Hays Larks. Goodale was a member of the last two Fort Hays State teams to reach the NCAA Tournament, as a player in 2003 and as an assistant coach in 2006.

Goodale and his wife, Jessica, have two daughters, Riley and Lauryn, and one son, Andy.