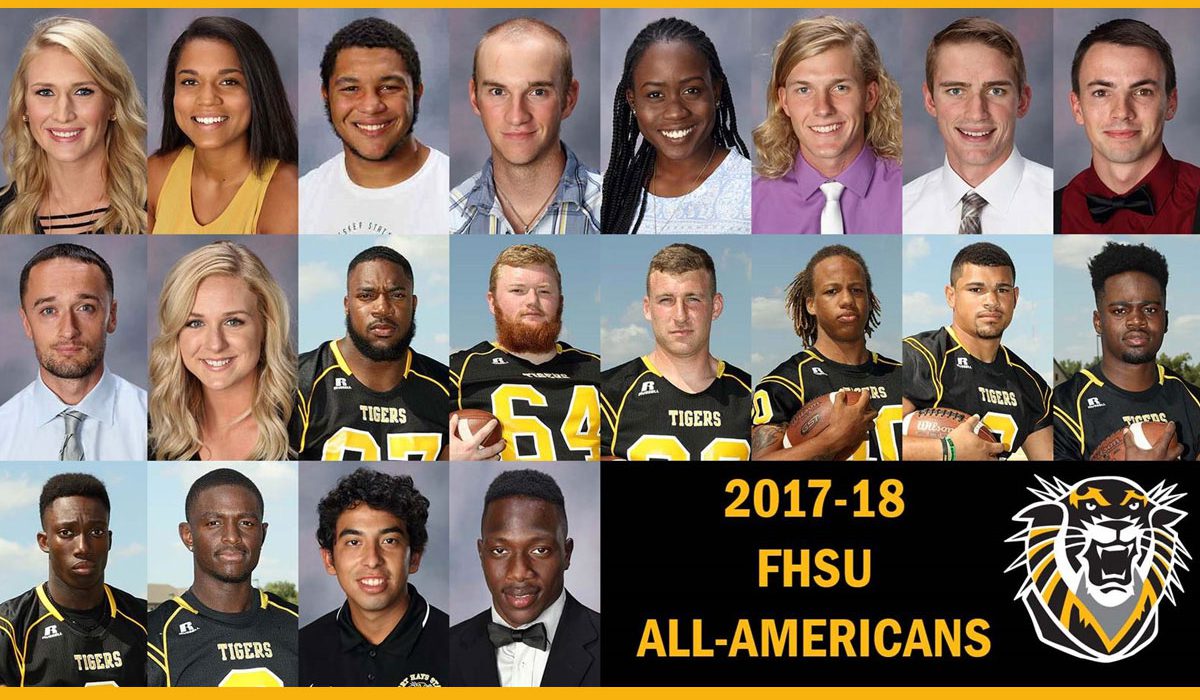 HAYS – Fort Hays State Athletics enjoyed another successful athletic calendar year in 2017-18, finishing in the Top 40 of the Learfield Directors’ Cup national standings. With the success came an unprecedented amount of All-America performers as Fort Hays State produced 20 in 2017-18, the most in the school’s history as members of NCAA Division II. Fort Hays State’s NCAA membership began in 1991-92. Track and field and football produced the majority of the list combining for 18 of the 20 All-America performers, 10 in track and field, eight in football. Men’s soccer and wrestling added one each to make the final count of 20.

With the addition of indoor track and field All-America honors for Cronin (2nd, 800 meters), Meyer (2nd, mile), Morrow (6th, pole vault), and Dreiling (8th, pole vault), Fort Hays State can claim 24 All-America performances for the year, as all four earned All-America honors for both the indoor and outdoor seasons. The quartet’s performance led to an 11th place finish nationally during the indoor season for the men’s program.

In football, Nathan Shepherd headlined eight players to receive All-America honors for the 2017 season. On the defensive line, Shepherd earned All-America honors from four organizations, including three that bestowed first team honors upon him. In the spring of 2018, the New York Jets selected Shepherd in the third round of the NFL Draft. Shepherd was the first NCAA Division II player selected in the 2018 draft. Travis Talley earned All-America selections from two organizations on the offensive line, including one first team selection. Receiving All-America honors from the Don Hansen Football Committee along with Shepherd and Talley were linebacker Jose Delgado, Brandon Brown, Dante Brown, Monterio Burchfield, Kenneth Iheme, and Doyin Jibowu. It was the most All-America football selections for a season in the history of the program as the team finished undefeated in the regular season to win the MIAA Championship and make its first appearance in the NCAA Playoffs since 1995.

For men’s soccer, senior Derick Gonzalez was the MIAA and Central Region Player of the Year as a midfielder, becoming the sixth All-American in just the program’s seventh year of existence. He helped the Tigers to their first MIAA Championship in men’s soccer. In wrestling, redshirt-freshman Efe Osaghae finished eighth at the NCAA Championships in the 149-pound weight class to take home All-America honors.

Eight of the 20 All-America performers from 2017-18 will return next year.