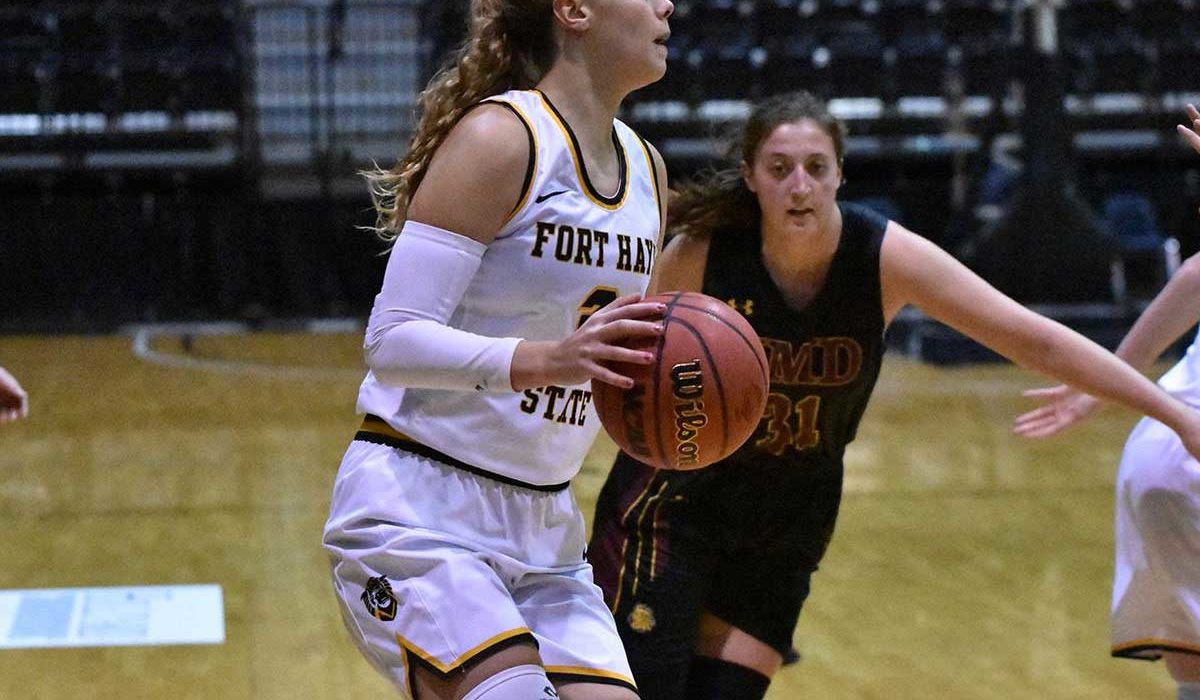 ST. JOSEPH, Mo. – The No. 7/3 Fort Hays State women’s basketball team displayed a well-balanced offense and strong defense in a 59-51 victory over Minnesota Duluth Friday (Nov. 8). It is the 16th-consecutive season-opening win for the Tigers, extending the longest such streak in program history. The Tigers are now 34-17 all-time in their first game of the year.

The Tigers never trailed in the contest, taking the lead on their first possession on a 3-pointer from Lanie Page before leading wire-to-wire. Fort Hays State recorded a shooting percentage of 39.3 percent (22-of-56), including an 8-for-17 effort from behind the arc (47.1 percent).

Defensively the Tigers were strong all afternoon, holding UMD to a 32.7 shooting percentage. The Bulldogs, who led the nation with just 11.0 turnovers per game last season, turned the ball over 19 times.

Kacey Kennett and Madison Mittie added 3-pointers in the opening quarter to help the Tigers stretch the lead to double figures, 18-7. Fort Hays State cooled off a bit in the second quarter, hitting 31.3 percent (5-of-16) from the floor after knocking down 50 percent (7-of-14) of its shots in the opening frame, but the lead continued to grow. The Tigers led by as many as 17 after a 3-pointer from Allison McFarren before taking a 15-point lead into the locker room, 30-15.

The Bulldogs started to rally out of the locker room, outscoring the Tigers 17-13 in the third quarter. UMD opened the final stanza with a quick bucket to close within single digits for the first time since early in the second quarter. Mittie knocked down another triple later in the frame to stretch the lead back to 11, 48-37, but the Bulldogs continued to fight.

Neither side scored for more than two minutes of game action before free throws helped the Bulldogs close within six. Taylor Rolfsknocked down a big 3-pointer from in front of the Tiger bench on the next trip down the floor, pushing the lead back up to nine, 53-44.

UMD scored the next five points to close within four with 48 seconds to play, but Jaden Hobbs and Page both hit a pair of free throws down the stretch to hold off the Bulldog run. Hobbs put the finishing touches on the win with a breakaway layup after a quick outlet pass from Page.

Page led the squad with 14 points on 5-of-10 shooting, including a pair of 3-pointers, while adding three assists, five rebounds and two steals. Belle Barbieri tallied nine points alongside a career-high 14 rebounds. Rolfs contributed eight points and three assists. Eight different Tigers etched their name on the scoresheet, with six different players hitting a shot from behind the arc.

Fort Hays State will wrap up opening weekend with a game against Concordia-St. Paul on Saturday (Nov. 9). First tip is slated for 2 p.m. from the St. Joseph Civic Arena.