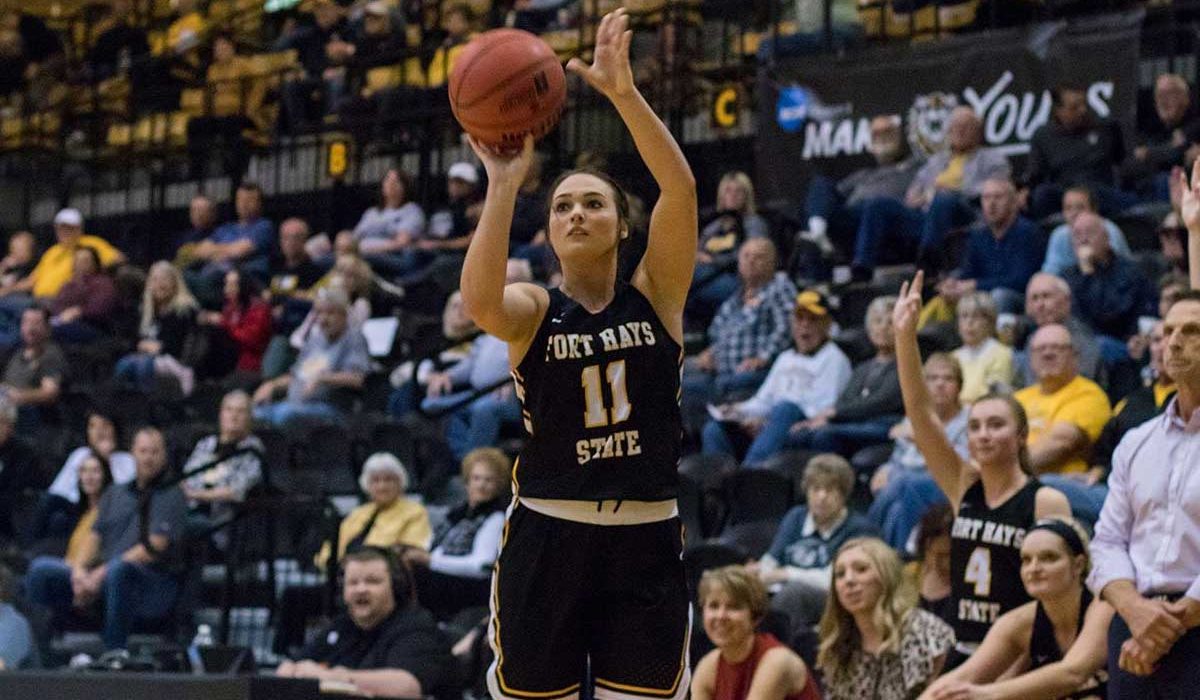 WICHITA – Jaden Hobbs hit seven 3-pointers and scored a career-high 29 points in a 74-48 win over Newman for the Fort Hays State women’s basketball team Saturday (Feb. 29). The Tigers finish the regular season 22-6 overall and 13-6 in MIAA play, while Newman wraps up the year 11-17 and 6-13 in conference action.

The Tigers trailed 14-12 after 10 minutes, but quickly bounced back with 30 second-quarter points. Back-to-back 3-pointers Taylor Rolfsand Jaden Hobbs put the Tigers on top for the first time early in the second frame, 20-17. Newman then scored 10 of the next 12 points to go back up by five, 27-22, before the floodgates opened for the Tigers.

Fort Hays State knocked down 6-of-7 shots from the floor over the final 3:31 of the first half, erupting to close the half on a 20-2 run. A jumper from Hobbs opened the run before Kacey Kennett followed up a steal with a 3-pointer, leveling the score at 27-27.

Hobbs put the Tigers in front for good with a pair of 3-pointers in a 34-second span, two of her four triples in the quarter. Cydney Bergmann chipped in the next four points before Hobbs capped off the opening half with another make from behind the arc and a pair of free throws, giving the junior 16 second-quarter points and 19 in the opening half.

Both teams cooled off in the third quarter before the Tigers got back on track in the final frame, burying all four of their 3-point attempts in the fourth quarter to put the game to bed. FHSU was equally as sharp on defense, holding Newman to just three field goals over the final 10 minutes.

Hobbs’ 29 points are the most for a Tiger in more than five years (Kate Lehman, 31 vs MSSU, 1/3/15). She was the lone Tiger to score in double figures, doing so for the 10th consecutive game. Belle Barbieri added nine points, 12 rebounds, two assists and two blocks. Bergmann, Kennett and Rolfs all scored eight points, with Kennett swiping a team-best three steals.

Fort Hays State buried 12 3-pointers on the day (12-of-27, 44.4 percent), its most against a Division II opponent this year. The Black and Gold had an even better day at the charity stripe, knocking down a season-best 94.7 percent (18-of-19). The Tigers had a sizeable advantage in rebounds, grabbing 41 compared to Newman’s 32 boards.

After finishing in a tie for fourth in the final MIAA standings, the Tigers will head to Kansas City, Mo. as the No. 5 seed in the MIAA Championship. FHSU will take on fourth-seeded Pittsburg State in the quarterfinals on Friday (March 6) beginning at noon.