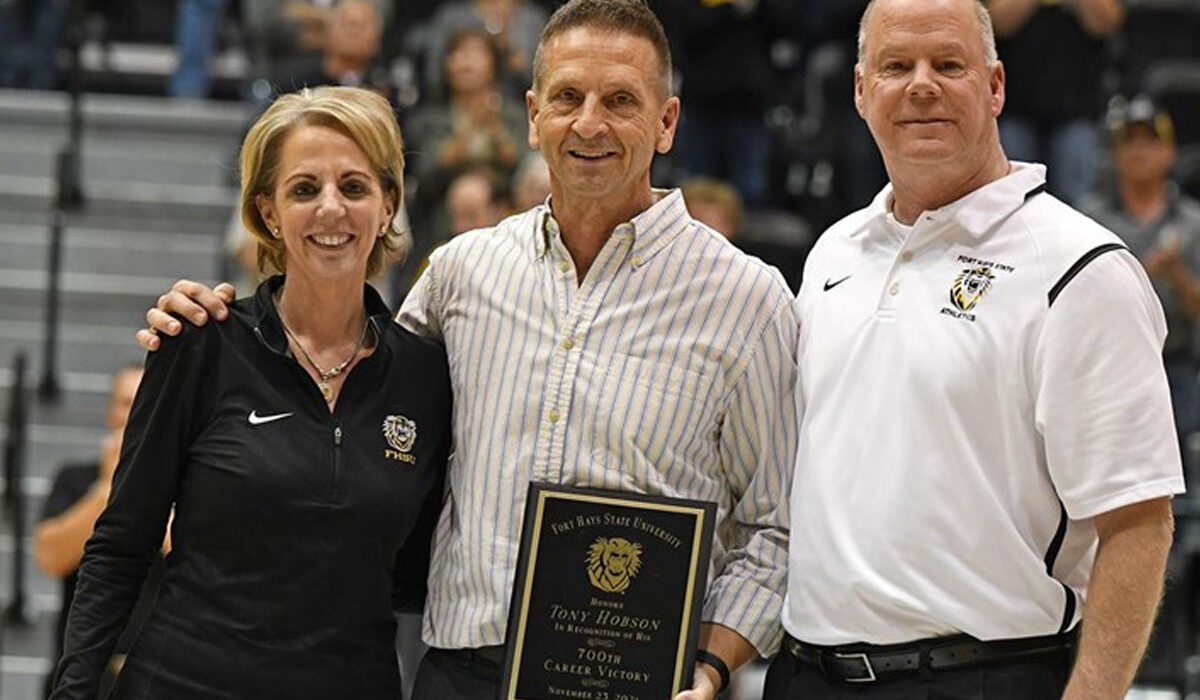 HAYS – The No. 1 Fort Hays State women’s basketball team fought off a talented Sterling College squad Tuesday evening inside Gross Memorial Coliseum, 81-72. The victory was head coach Tony Hobson‘s 700th career victory in his 30th season as a collegiate head coach. The win also moves the Tigers to 5-0 on the year before they head into conference play next week.

The Tigers led by as many as six early on before the Lady Warriors started to heat up later in the first quarter. Sterling, the eighth-ranked team at the NAIA level and winners of 36 of its last 37 games, scored the final seven points of the quarter, including a buzzer-beating 3-pointer to lead 17-14 at the end of the opening frame.

The lead would be short-lived, however, as Whitney Randall put the Tigers back on top 81 seconds into the second quarter after dropping in a layup and hitting a 3-pointer. Those buckets sparked a 17-0 run by the Tigers, who raced in front by 13 in just over five minutes, 30-17. Sterling battled back by hitting seven of their next eight shots from the floor, closing within two late in the quarter. But Olivia Hollenbeck finished off the half with an old-fashioned three-point play, giving the Tigers a 40-35 lead at the break.

Fort Hays State pushed the lead to seven early in the third quarter before Sterling rattled off seven-straight points, tying the score at 46 and prompting a Tiger timeout. Katie Wagner came up with a bucket out of the huddle, putting FHSU in front for good.

After trailing by just three heading into the final quarter, Sterling narrowed the gap to one after scoring five points in 24 seconds midway through the fourth. But the Tiger defense stepped up down the stretch, holding the Lady Warriors to just 2-of-9 shooting and forcing three turnovers over the final six minutes to seal the win.

Following the Sterling run to make the score 65-64 with 6:15 to play, Fort Hays State scored the next 10 points to pad the lead back to double figures. The Tigers forced six-straight misses by the Lady Warriors over that stretch while scoring on five consecutive possessions to regain control.

Hollenbeck opened the run with a layup off a pass from Wagner before Wagner buried a jumper from the top of the key after an assist from Carly Thompson. Randall added a layup on the next trip down the floor after Hollenbeck grabbed an offensive rebound. Wagner hit a free throw on the following possession before Randall capped off the run with a baseline jumper.

The large lead allowed the Tigers to withstand a late Sterling run, keeping the lead at or above seven points for the remainder of the evening.

Wagner tallied her third double-double of the season, leading the team with 23 points, 11 rebounds and five assists. Hollenbeck added a career-best 22 points and four assists while adding eight rebounds, three steals and one block. It was the second game in a row in which the Tigers had multiple players score 20 or more points.

FHSU nearly had a third player reach 20 points as Randall contributed 18 points, seven rebounds, three assists and two blocks. Lauren West chipped in 11 points thanks to a pair of 3-pointers and matched Wagner with a team-best five assists.

The Tigers will hit the road to open conference play next week at Washburn on Wednesday and at Emporia State on Saturday.