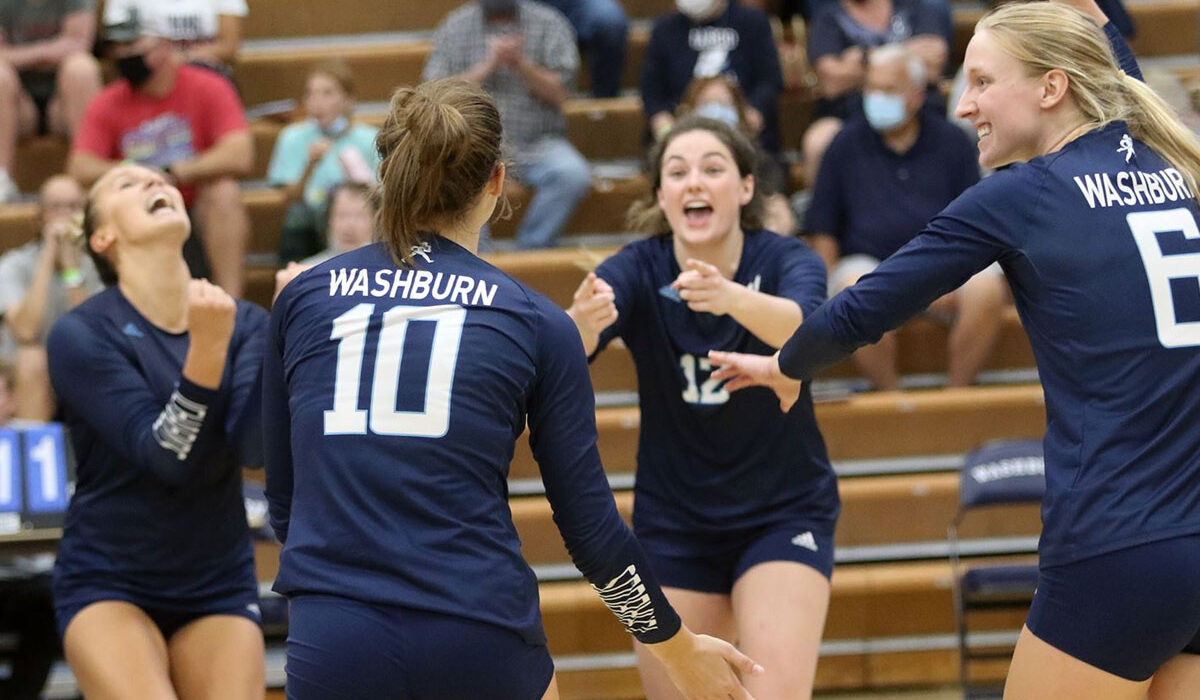 TOPEKA – The No. 8-ranked Ichabod volleyball squad opened up the Washburn Invitational with wins over Colorado-Colorado Springs and No. 19 Harding to move to 3-0 on the young season. The Ichabods close out the home tournament tomorrow (Saturday, Sept. 4) with two more matches, taking on Minot State at 11 a.m. and No. 15-ranked Northern State in the final match at 4:30 p.m.

GAME 1 (WU 3-UCCS 1)
The Ichabods made quite the opening statement in the first set as they limited the Mountain Lions to just five points for the entire frame. Holding a 4-2 lead, Washburn went on an 11-0 scoring tear and later captured nine of the final 10 points en route to the 25-5 win. The Ichabods knocked down 12 kills on 20 attempts for a .600 attacking percentage in the set.

The second set looked nothing like the first as there were 12 tie scores and six lead changes while neither team led by more than three points. UCCS claimed the first two points and the score went back-and-forth while staying within two points until a Mountain Lion attacking error gave the Ichabods a 12-9 advantage. With the score tied up at 21-all, Colorado-Colorado Springs pulled ahead with three-consecutive points before the Ichabods spoiled the game point by scoring three in row themselves to even the score again. The Mountain Lions held on, though, and evened the match score at 1-1 with a 26-24 victory.

Washburn regained control in the third and jumped out to a 7-1 lead and never looked back as it cruised to a 25-11 victory.

UCCS knotted up the score in the fourth set at three-apiece, but that would be as close as it got as WU went on a 7-0 scoring run. Taryn Pridgett knocked down the final kill of the match to clinch the 25-13 decision and 3-1 victory.

The Ichabods hit .364 for the match while the Mountain Lions finished at a -.016 attacking percentage.

Kelsey Gordon led the Ichabods with 10 kills and was a part of three blocks. Allison Maxwell finished with a scorching .600 attacking percentage and nine kills. She also contributed defensively with three solo blocks. Genna Berg also had nine kills on the day. Faith Rottinghaus scooped up 21 digs and Taylor Antonowich recorded 12 digs and landed two of the seven service aces.

For the Mountain Lions, Lauryn Shockley had a team-high 12 kills.

GAME 2 (WU 3-HU 0)
The first set was a back-and-forth battle with 15 tie scores and six lead changes. Neither team led by more than one point until Harding knocked down back-to-back kills to go up 10-8. Washburn called a timeout trailing 12-9 and won the next three points to even the score yet again. The Bison held a 22-20 advantage when a timely kill by Madison Johnson sparked a 5-1 scoring run, capitalized by Allison Sadler’s service ace, to rally for the 25-23 win.

A kill by Genna Berg broke an early 2-2 tie in the second set and started a 5-1 scoring run to give the Ichabods a lead they would hold on for the remainder of the set. Harding landed a kill to make it 24-21, but then committed a service error to put Washburn up 2-0 in the match.

The third set was another fight for the lead with seven tie score and four lead changes. Down 10-7, Kelsey Gordon got things going again for Washburn with a kill and gave the Ichabods some momentum for a 6-1 run to reclaim the lead. Harding got within two, 20-18, but Washburn scored the final five points to close out the sweep.

Both teams hit well as Washburn finished with a .378 attacking percentage to Harding’s .323 percent, but the Bison recorded 47 kills to the Ichabods’ 44. The Ichabods landed six service aces while the Bison had two.

Berg led the Ichabods with 11 kills and added seven digs. Allison Maxwell hammered down 10 kills and committed just one error on 16 attempts for a .562 attacking percentage. She also recorded three block assists at the net. Kelsey Gordon chipped in eight kills and freshman Jalyn Stevensoncontributed a personal-best seven kills. Setter Allison Sadler dished out 26 assists and Faith Rottinghaus made 16 digs.

For the Bison, Chloe Ingersoll had a game-high 12 kills and Ally Stoner added nine kills of her own.