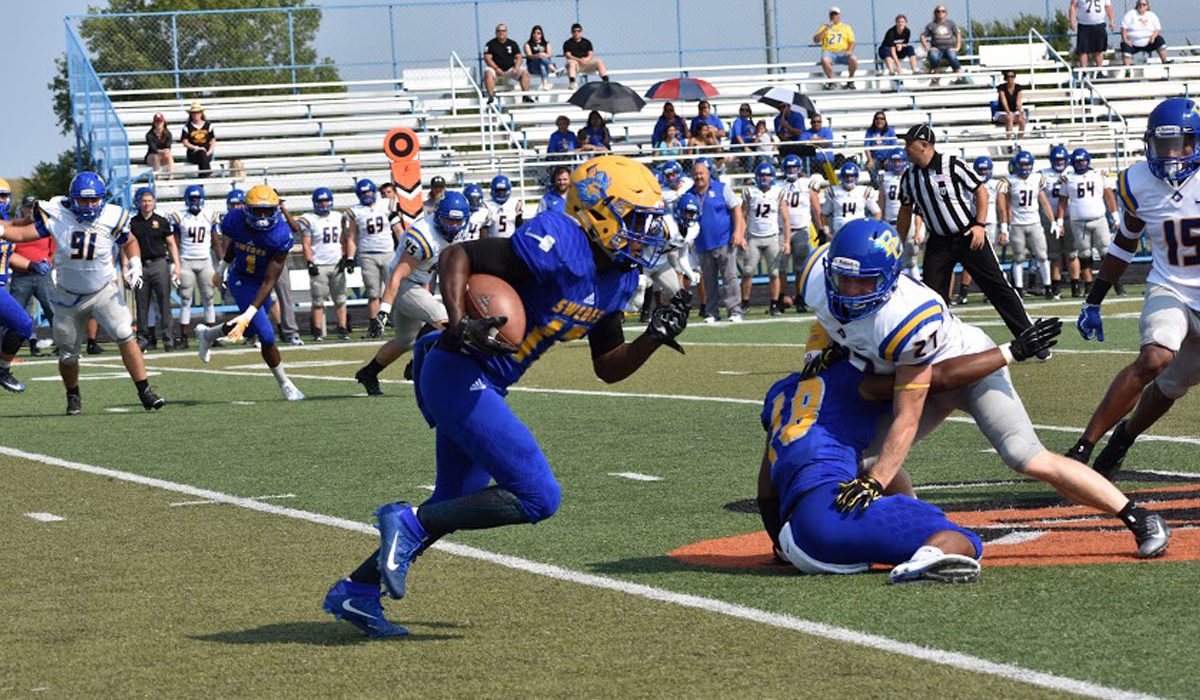 LINDSBORG – The Swedes football team started their season off with a 36-23 win over Briar Cliff University. This match up was part of the KCAC-GPAC Challenge.

Bethany got off to a roaring start, scoring on their first procession. Jafar Thomas, junior running back, capped off a three play, seventy-five yard series with a 13 yard touchdown carry. After a stop by each team’s defense it was the Chargers who found their way into the end zone, evening up the score, 7-7. Briar Cliff picked up some momentum forcing a Swede fumble and scoring on that drive, finishing the quarter on top 14-7.

The Swedes, however, used the break to their advantage. They came out to the second quarter and their defense got a stop. The Bethany offense then did their part, with another Thomas touchdown, this one for three yards. This touchdown was heavily aided by an 18 yard reception by Michael Wimberly, senior receiver, the play before.

The Bethany defense kept the pressure on, forcing a three and out by the Chargers. The Swede offense then took the lead with a 58 yard drive on their next procession. This drive was capped off by a 18-yard toss from Isaiah Salazar, junior quarterback, to Rodney Molette, junior receiver.

However, the Chargers offense was able to score their own touchdown on their next drive down the field. Once again, the score was tied up, 20-20.

With 4:08 left on the clock, the Swedes offense took the field looking to take the lead again before half came to an end. And the Swedes did just that. In eight plays the Bethany offense moved 54 yards to score on a Salazar-Mike Milbourne, junior receiver, 26-yard connection.

That would be it for the half with a couple defense stops by each team. The teams went into the locker room for half time with the Swedes leading 27-20.

In the third quarter, the Swede defense started out with the pressure on once again forcing a three and out from BCU. The offense then once again, marched down the field to claw their way into the end zone. After a earning a first down on the three yard line, it took the Swedes all four downs until Aaron Knox, freshman running back, was finally able to push through and score. This put the Swedes up, 33-20.

The Chargers got on the board for the first time in the half the next series putting in a 41-yard field goal.

BCU then stopped the Swedes and ended the third quarter on offense. Starting the fourth quarter, the Chargers offense had a chance to score but were unable to put their 33-yard field goal attempt through the uprights.

After a pair of uneventful drives, the Swedes then pushed themselves within field goal range and James Augusta, senior kicker, put in a 23-yard field goal, bringing the score to 36-23. The Swedes defense stopped the next Briar Cliff advance, giving their offense a chance to drop to a knee and run out the clock.

Wimberly was an offensive powerhouse today for the Swedes. With 189 yards on six receptions the senior averaged 31.5 yards per catch. He also had three kick-off returns for a total of 76 yards. Millbourne did his share with 62 yards on four catches.

The ground assault for the Swedes was led by Thomas. The junior ran 122 yards on 22 carries with two touchdowns. Knox picked up 69 yards on 10 carries with one touchdown to start his collegiate career.

Commanding the Bethany offense was Salazar who completed 14 of 23 passes for 301 yards, and two touchdowns.

On defense, a pair of Swedes earned double-digits in the tackle column. Chris Owens, senior defensive back, led with seven solo tackles and four assists, totaling 11. Owens also had one tackle for a loss of a yard. Jau’marl Clark, junior linebacker, also had seven solo tackles, and assisted on three. He got in on three tackles for a total loss of five yards. Rhett Mizer, junior safety, put up nine tackles, four solo, to start his junior campaign. Bethany’s Dahari Gray, sophomore lineman, posted a huge sack for a loss of eight yards.

As a team, the Swedes totaled nine tackles for a loss of 25 yards.

“This a brand new team, brand new season, I am highly optimistic,” head coach Paul Hubbard said. “I felt like we handled adversity better, that is something I talked about all year last year. Every time something bad happened on the field, they would just focus on the next play and handle the adversity thrown at them.”

The Swedes will take a bye week next week before kicking off KCAC play. Bethany will open conference play with McPherson County rival, McPherson College. This game will kick off on September 16, inside Anderson Stadium, at 7 p.m.