Tales of the Tigers: How FHSU just clicked for Stroyan 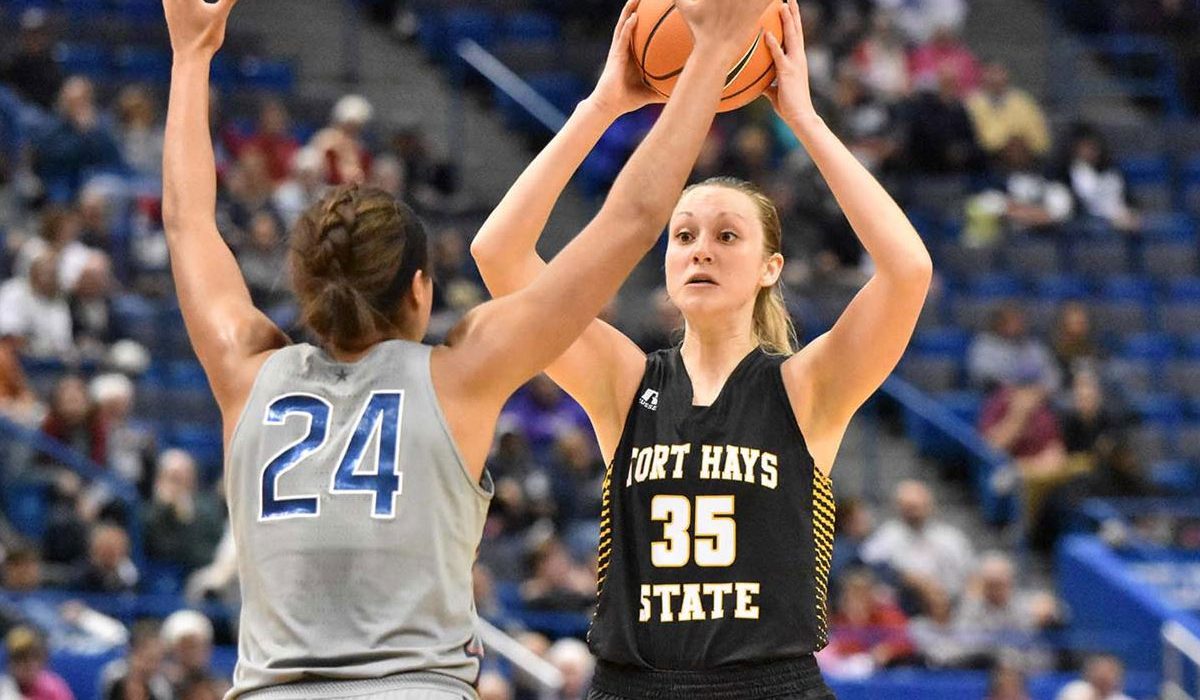 After 111-straight wins, the University of Connecticut women’s basketball team fell in the NCAA Final Four to Cinderella program, Mississippi State. In overtime, the Bulldogs snapped the Huskies’ streak 66-64 with the game-winning shot at the buzzer. With a clean slate and the hopes of starting yet another streak, the 2017 season started for UCONN, and its first opponent after the historic loss: Fort Hays State. Though the Tigers fell in their first exhibition game of the season, 82-37, the opportunity to compete against the perennial powerhouse was once in a lifetime. This experience was especially memorable for the lone senior on the FHSU women’s squad, Emma Stroyan.

Stroyan is in her second season with the Tigers, after transferring from NCAA Division I program Central Connecticut State. After playing her first two collegiate seasons at CCSU, Stroyan realized her heart wasn’t in it anymore as a member of the team, and she didn’t feel like this was where she needed to be.

“By the end of season my sophomore year, a total of eight teammates and two coaches had either left or transferred. The team I had connected with on my visit was entirely different. The whole team dynamic changed and I went through a lot of tough situations with those other teammates. I was torn on staying there because I was starting and earning significant playing time on the court as a sophomore, but didn’t have the connection with my teammates,” said Stroyan.

When Stroyan and her new team at FHSU were told of the opportunity in front of them to play against UCONN to open their season, the reaction was somewhat unbelievable for the lone senior.

“Honestly, my first thought was, ‘seriously, of all the places to go, I am going back to Connecticut where I left. We couldn’t have gone to Hawaii or Florida or something?’ But I am so incredibly grateful for that trip. Not many people can say they have played UCONN, and that entire experience was just so surreal to get to play against the greatest dynasty in women’s basketball history and to be on the same court with the best players in the nation and future professional athletes,” she said.

Peter Werth, a Hays native and FHSU alumnus, was an integral part of getting the Tigers on the same court as the Huskies. The practice facility on UCONN’s campus is named after Werth and his family, so it made sense for the two programs to eventually meet. The Tigers had first-class treatment from start to finish on their trip to the East Coast, giving Stroyan and her teammates an even better experience than expected.

“The first night, we went to UCONN’s practice facility and probably took about 10 minutes taking it all in before actually starting practice there. Then the second day, we went to the XL Center in Hartford (site of the game) to have practice. Later that night we went to watch the UCONN girls practice, got a tour of the locker room and the rest of the building, met Geno (Auriemma), and then got to eat supper with the players afterwards. Everywhere you looked, there was a trophy, banner, picture, ring, medal, or award of some sort—just goes to show how successful that program is,” said Stroyan.

The next day was game day, which felt even more surreal to the team. The Tigers and Huskies tipped at the XL Center, not on UCONN’s campus, but that did not take away from the experience. The Huskies got back to their winning ways capturing the exhibition victory over the Tigers, but Stroyan felt like the real winner at times.

“The game itself the was absolutely indescribable. You grow up watching and hearing about UCONN women’s basketball and never in a million years did I think I would be able to be on the same court, playing in the same game as them! And of course, they’re just so good—I don’t think I’ve ever been so honored to get my shot blocked in my life,” she said.

Although the competition against UCONN was intense, Stroyan has already experienced a change in the level of competition due to her transfer from CCSU. Stroyan, who grew up playing basketball in her native state of Illinois, has traveled all over the country because of the sport. After earning a varsity spot all four years at her high school, Stroyan turned her focus to playing the game she loved in college. Combining her love for marine biology and basketball, Stroyan found her full-ride offer from Central Connecticut State to be the best fit at that point for her.

“I made a really good AAU team out of Chicago and my Dad and I made the 2 ½ hour trip there and back two days a week for practices. That team really helped me improve and I spent the fall of my senior year going on a ton of visits. I ended up getting quite a few full-ride offers from schools and signed with Central Connecticut in November of my senior year. It was an up-and-coming program, so I thought I could contribute right away,” she said.

During her sophomore season, Stroyan started all 30 games for CCSU while averaging 5.7 points and 3.3 rebounds per contest. Stroyan also made an impact her freshman season, starting 23 games for the Blue Devils. Although her impact was felt on the court, Stroyan knew she needed to find the best fit for her to end her collegiate playing career. Enter Hays, Kansas.

“I didn’t want to sit out a year by transferring D1 to D1, so I sent out a general email to a lot of D2 programs back home in the Midwest I was interested in. That was stressful because here I was going through the whole recruiting process all over again. Coach Hobson was the third coach to call me up. That call kind of stuck with me because I appreciated how forward he was with me and what the program here was all about. Hays was my first stop, and I had an instant amount of respect for Coach, the program, teammates, and the Hays area. After the visit as my Dad and I were driving back, I remember just saying, ‘Dad, that was it—I just clicked here’,” she said.

With one year under her belt at FHSU, Stroyan has appreciated the level of play she experiences throughout the tough MIAA schedule during a given season.

“The MIAA is a really tough conference–any team can win on any given night, no matter what they’re ranked.  While I don’t have to guard a big 6’4″ post every game, the players are just as competitive and skilled in this conference,” she said.

Now, during her final season, Stroyan has accepted the important role of being the only senior on the roster for the Tigers. With a young team for Coach Hobson, the Tigers all are involved equally on the court, but Stroyan has even more pressure on her shoulders.

“It’s a little tougher being the only senior on the team. Last year we had multiple seniors, so they had each other to lean on. Being the only senior, you have to be that leader all the time; there are not those others to share the load. Although with this team, we have some great juniors with good experience and skills that have stepped up, so it’s like having other seniors,” said Stroyan.

With all of the senior leadership falling on Stroyan, she has had to quickly accept and understand what she needs to bring to the court day in and day out for her fellow teammates.

“Senior leadership means being there for your teammates in the good times and the bad, and constantly supporting them and guiding them—helping them get adjusted to basketball at this level as well as the rigors of being a collegiate student and athlete. I am not the most-flashy player, but I get the job done and I try to do the fundamentals, work hard, and encourage everyone. It is so important to me to be a good person and teammate, to live my life in a way that demonstrates character and honor both on and off the court for others to see. In today’s world, that is something that is too often missing,” she said.

For Stroyan, she has set personal and team goals, knowing the full potential in front of them. Although they are young, the Fort Hays State women’s team understands what they are capable of, and having Stroyan as their senior leader, they can reach towards those goals.

“My goal for the team is to finish in the top four of conference this season, so that we get a bye past the first round of the tournament. With hard work and focus on the little details, I think we can be right there. If you start with the fundamentals and short-term objectives, then ultimately you can check those off and the bigger, long-term goals get accomplished. Just take one step and one game at a time,” said Stroyan.

With the regular season just underway, Stroyan hopes her final season can be a memorable one for her. Although the road to Hays has been a long, difficult road at times, the senior is ready to leave her impact on the FHSU program.

“Personally, I would love to make one of the all-conference teams. That has always been a goal of mine since I started playing college ball. Last year, I had to adjust to a new environment and system, and I think I did that and I am ready for this year. I will always give everything I have with the time I am given and always try to do the little details to consistently contribute to the team’s success,” she said. “Four years goes by fast, so every moment counts and can’t be taken for granted.”