Tigers cruise past Tabor as Hobson picks up 600th victory 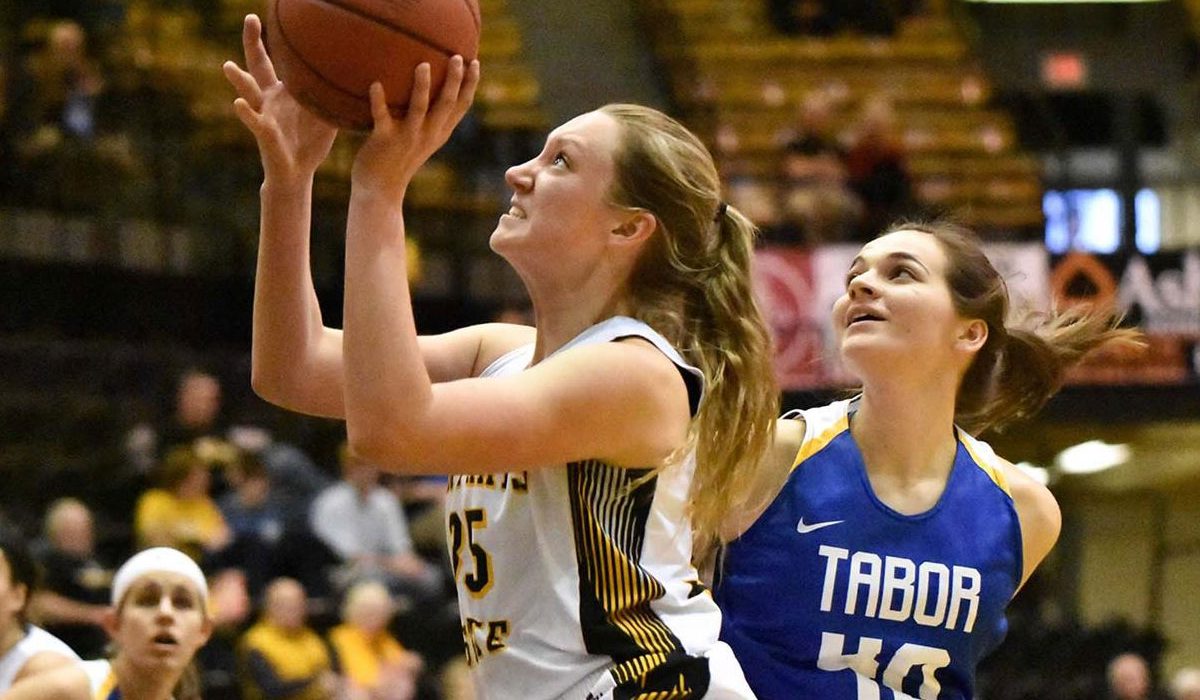 HAYS – Coming off a pair of road losses last weekend, the Fort Hays State women’s basketball team returned to Gross Memorial Coliseum with a vengeance Wednesday, dashing out of the gate to extend a 39-point lead midway through the second quarter before defeating Tabor College, 90-44. The Tigers took a 46-7 lead at the 5:11 mark in the second period after a 3-pointer from Carly Heim, and had they not scored the rest of the night, they still would have won the game. Fort Hays State moves to 8-2 on the season while the game was treated as an exhibition for NAIA member Tabor.

The rout was on virtually from the first tip, as Emma Stroyan dropped in an easy layup off a bounce pass in the lane from Taylor Rolfs 16 seconds in to give Fort Hays State the lead for good. And lead they did – the Tigers went 6-for-9 from the floor over the first four-plus minutes while playing stellar defense to extend an eye-popping 17-0 lead. The Bluejays finally scored four minutes, 26 seconds into the contest, but after another bucket on the next possession FHSU went on another incredible run.

The Black and Gold held the visitors scoreless for nearly nine minutes, scoring 26-straight points to extend the lead to 43-5. It was the longest run for the Tigers this season, and the five points scored by Tabor in the opening quarter was the lowest scoring quarter for an opponent so far this year. Tabor hit four shots down the stretch in the second period, making the score at halftime 52-14.

The Bluejays were more effective out of the locker room, outscoring their first half performance in the third quarter alone with 16 points. The Tigers, however, never took their foot off the gas pedal. The Tigers led by as many as 52 points in the fourth quarter (84-32), their largest lead in any game so far this year.

While Stroyan led the offensive outburst with a season-high 20 points, matching her career-best game at FHSU, Wednesday’s performance was truly a team effort with 12 different Tigers chipping in points. Fort Hays State moved the ball very well on the offensive end, distributing 19 assists while making just 11 turnovers. Kacey Kennett led the team with four assists and added 13 points. Lindsay Shupe dropped in a career-high 12 points, including 10 after halftime. Robin Ritsema accumulated four a career-high four blocks, helping the Tigers to a season-high 10 swats on the night. Gokce Aslan was a perfect 3-for-3 from the field, totaling eight points after pouring in a pair of shots from behind the arc. Whitney Randall (six points) and Ritsema (five) also reached season-high figures in scoring, giving FHSU five individuals to set season-best marks.

The Tigers knocked down a season-high 56.3 percent from the floor, including an 8-for-16 effort from behind the arc. The Tigers dominated under the basket, outrebounding Tabor 45-25 while outscoring the Bluejays in the paint, 48-18.

Fort Hays State will head back out on the road this weekend when it travels to Kansas City, Mo. to take on Rockhurst Saturday (Dec. 16). First tip is set for 2 p.m. from Mason-Halpin Field House.