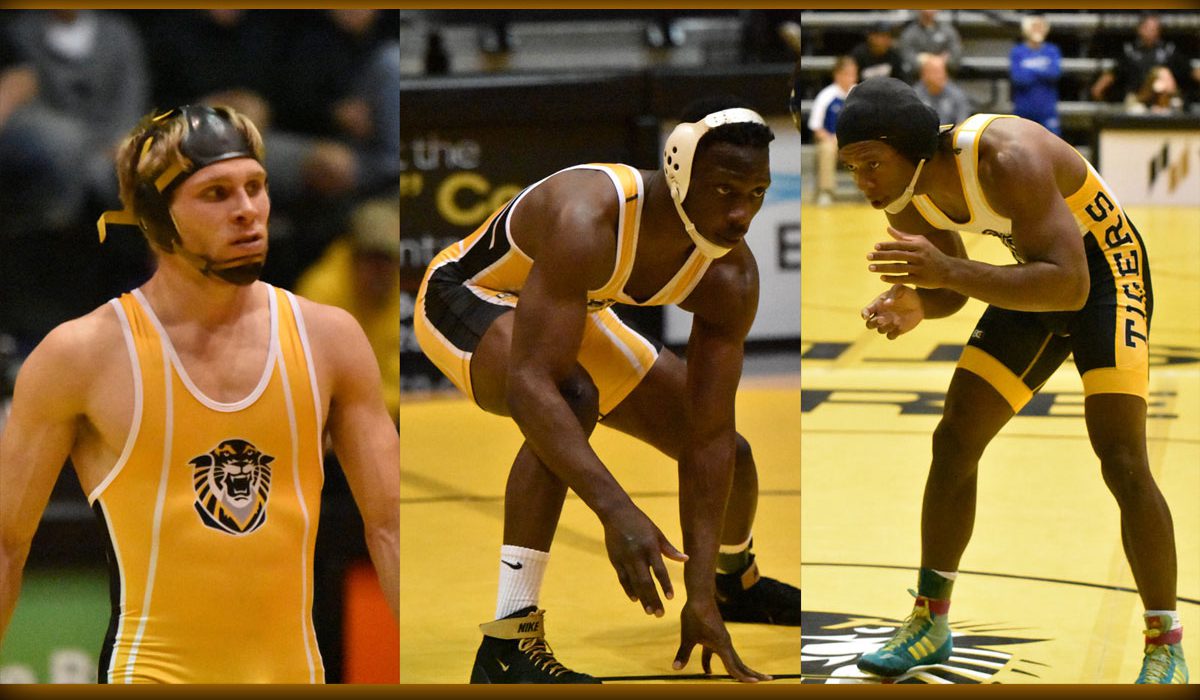 Eighth-ranked Brandon Ball earned his first MIAA Championship of his career in the 141-pound weight class. Ball defeated Jonathan Killingsworth of Nebraska-Kearney with a 4-2 decision in the first round. The sophomore pinned Derek Heil of Lindenwood in the semifinals in 4:58 and narrowly beat out Tevin Briscoe of UNK with a 3-2 decision in the title bout.

Redshirt-freshman Efe Osaghae earned his first conference championship as a Tiger in the 149-pound weight class. Osaghae received a bye in the first round. He then went on to defeat Will Steltzlen of Central Oklahoma with a 3-2 decision in the semifinals. In the title match, Osaghae used a takedown in overtime to defeat defending national champion, Keith Surber of UNK, for the second time this season with a 3-1 sudden victory this time around.

Senior Rakim Dean extended his bout winning streak to double digits (ten) and improved from last season’s third place finish by winning the 197-pound weight class title for the first time in his career. Dean defeated John Kramer of Lindenwood in the first round with a 16-1 technical fall. He then defeated Chance Bila of UNK in the semifinals with a 3-1 decision. Dean earned the championship after a medical forfeit.

In the 174-pound weight class, Micquille Robinson delivered a runner-up finish for the Tigers. Robinson defeated Nata Panagakis of Newman with a 3-2 decision in the first round, advanced past the semifinals via medical forfeit before dropping the title bout to Zach Stodden of Nebraska-Kearney by decision (3-2).

Conrad Cole was the first Tiger to earn a third place finish after receiving a bye in the first round of the 125-pound weight class. He then was defeated by eventual champion Elijah Hale of UCO in the semifinals. The sophomore pinned Tyler Lawley for the second time within a week to move on to the consolation championship where he won via medical forfeit.

Senior Dylan Wiesner earned a third place finish in the 174-pound weight class after defeating Reid Rodich twice. The first victory was in the first round by a 10-6 decision as the second was to claim the consolation championship over Rodich via 7-0 decision.

Micah Felton claimed third place in the 184-pound weight class for the Tigers. Felton pinned Zach Benner of Central Missouri in the first round in 2:44. He was then defeated by Noel Torres of Newman in the semifinals via a 2-1 decision. The junior advanced to the third place match by medical forfeit and defeated Isaac Deaton of UNK with an 11-6 for the consolation title.

The Tigers will have two weeks to prepare for the NCAA Division II Regionals in Las Vegas, N.M. (Feb. 23-24).