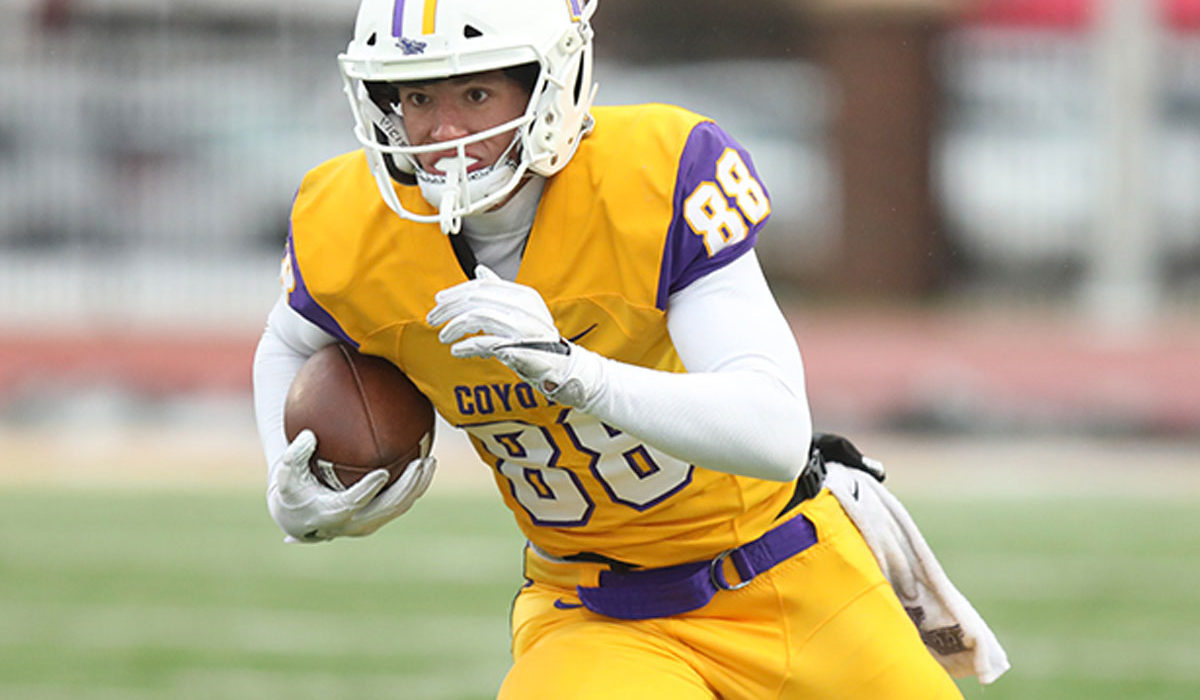 SALINA – During their unprecedented and historic run this season, the Kansas Wesleyan Coyotes were masters of the turnover margin.

The offense seldom lost the ball and the defense frequently forced opposing teams into mistakes – 16 interceptions and five fumble recoveries for a plus-eight margin.

That wasn’t the case, though, during Wesleyan’s NAIA Football Championship Series semifinal game Saturday against No. 7 Benedictine. Two fumbles and two interceptions were pivotal and costly in the Coyotes’ 43-21 loss before a brave, but soaked and frozen crowd of 1,789 at Graves Family Sports Complex.

The setback ends the best football season in KWU and Kansas Conference history – the success reflected in the Coyotes’ 13-1 record and slew of school, conference and NAIA records.

Benedictine (13-1), which plays Morningside (Iowa) for the national title on Dec. 15 in Daytona Beach, Fla., scored 22 points as a result of the four Coyote miscues. The Ravens had one turnover in the game.

“I think they were probably the favorites coming and I don’t think we did a whole lot to help ourselves,” Wesleyan coach Matt Drinkall said. “Not only the turnovers, but I think we made them defend about 20 short fields it sure seemed like. We put our defense in a bunch bad spots and had a couple of negative plays.”

KWU rallied and took a 14-13 lead in the second quarter on Demarco Prewitt (JR/Menifee, Calif.)’s touchdown runs of 2 and 26 yards, the latter with 7:05 left in the half.

Wesleyan got the ball to start the second half, but turnovers on their first two possessions slammed the door on a comeback. Prewitt fumbled at the 28-yard line on the first play from scrimmage and Benedictine’s Zach Renfro scored from the 4, four plays later, extending the lead to 26-14 after a two-point conversion pass failed.

The Coyotes drove to the Benedictine 36-yard line on their next possession, but a Feauto pass was batted in the air and intercepted at the Wesleyan 47. Stewart scored again five plays later, making 33-14 with 8:15 left in the quarter.

Down 40-21 early in the fourth quarter, Prewitt took a handoff, rolled to his right and threw a pass that was intercepted at the Benedictine 34. The Ravens capped the scoring 13 plays later on Jacob Young’s 26-yard field goal with 4:56 left.

“As fast as the first half went, the third quarter seemed like it wouldn’t end,” Drinkall said. “We didn’t start that quarter off the way we wanted and when you fall behind by multiple scores you can’t really play your game. You become a much more one-dimensional offense and become a lot easier to stop.”

“I think (turnovers) were a big momentum shift starting the second half,” said KWU wide receiver Trenton Poe-Evans (JR/Needles, Calif.), who had eight catches for 88 yards. “We just didn’t play our best today.”

Stewart, a fast and hard-charging senior tailback, was virtually unstoppable, finishing with 286 yards rushing on 31 carries and the two touchdowns.

He had 193 yards rushing the second half and was named the Most Outstanding Offensive Player of the Game.

Schuetz, a senior, was 7 of 17 for 92 yards, two touchdowns and no interceptions. He was at his best handing the ball to Stewart.

“All the credit in the world to Benedictine,” Drinkall said. “They’re well coached, first class — I love the way they play football. If we’re going to go down I’m glad it was to a really quality ballclub like them.”

Prewitt, the NAIA’s leading rusher, had 116 yards on 30 carries and three touchdowns, giving him an NAIA-best 38 TDs for the season. He finished the season with 2,371 yards rushing.

Feauto completed 18 of 36 passes for 185 yards, but the Coyotes dropped several passes. He also had 37 yards rushing on 11 carries.

“I was pretty confident we were going to come out the second half and do our thing and play our game, and we just made some mistakes,” Poe-Evans said.

“You get to the Final Four with the big boys and everything’s two steps faster, two steps harder, two steps quicker and you’ve got to be ready to go,” Drinkall said.

Drinkall, who completed his fifth season at KWU, wasn’t disappointed in the least after the loss.

“I’ll never, ever forget what these kids accomplished this year. … This is a one-of-a-kind, remarkable year,”

“We were 23 points from playing in the national championship in two weeks,” Poe-Evans said.