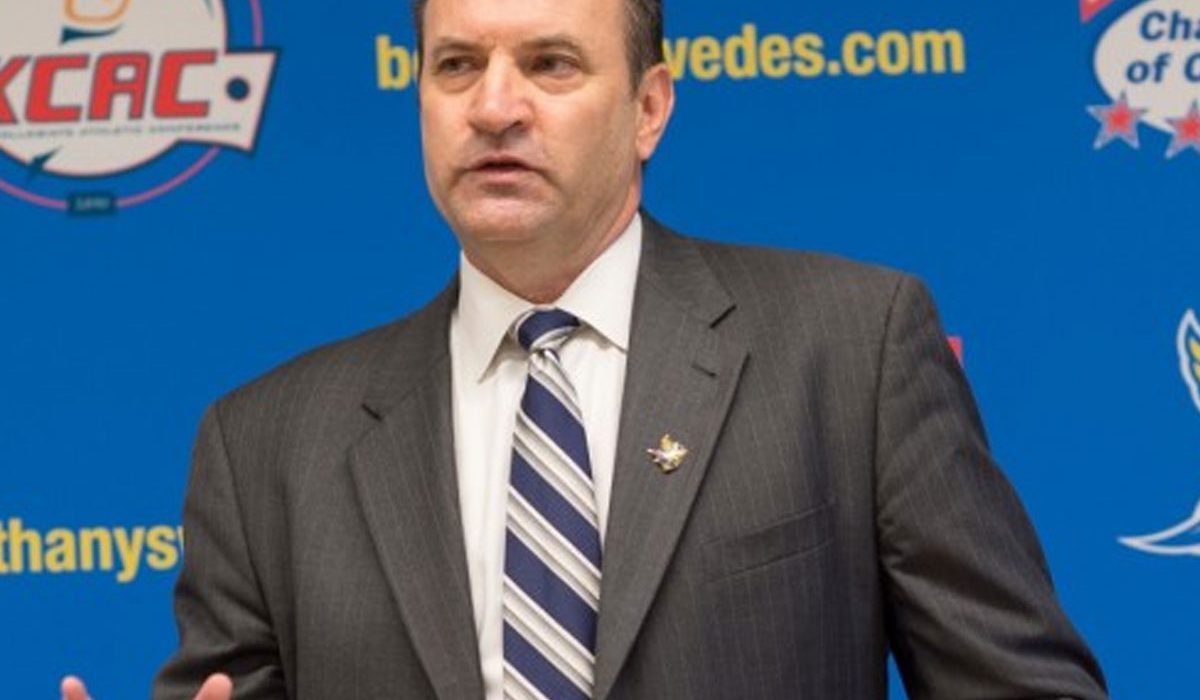 “Words cannot describe how excited I am to be returning to my alma mater as Bethany College’s next head basketball coach. I am extremely grateful to President Jones and Athletic Director, Dane Pavlovich, for considering me worthy of this honor,” O’Dowd said.

“Throughout the initial screening process Coach O’Dowd’s name kept surfacing as a superior candidate. My time on the phone with him and during the interview solidified him as the top candidate for the position,” Dean of Athletics and Student Development, Dane Pavlovich said.

O’Dowd has seen success as an assistant coach at many levels. He has been with teams in the NCAA Tournament five times, the NIT three times, and the NJCAA Regional Tournament twice.

“Bethany alumni are often successful professionals who love God and love people. Dan O’Dowd is such a person and coach. We are excited to add him to our strong group coaches,” said Bethany College President William Jones.

The Bethany alumnus comes to Lindsborg from Denton, Texas and the University of North Texas where he was the assistant coach for one year. During this time, he assisted in game and practice preparation, scheduling, individual workouts, and recruiting. The team had one player named to the Conference USA all-freshman team.

Before his time at North Texas, O’Down was at University of Texas at San Antonio where he was an associate head coach from 2006-2016. There he served as the recruiting coordinator in addition to being the lead assistant for all games, practices, and off the court duties.

While at UTSA O’Dowd recruited and coached three Southland Conference Freshman of the Year award winners, and helped coach the team to the school’s first-ever NCAA Tournament victory in 2011.

Before his time at UTSA, O’Dowd was an assistant coach for eight years at Arizona State University. There he assisted with game and practice planning, individual workout and scouting. Off the court, O’Dowd managed all student workers and managers, organized team travel, and assisted with scheduling, academics, compliance, marketing and budgeting.

During his time at ASU he coached and/or recruited two Pac 10 Player of the Year award winners. He also helped guide the team to three NIT appearances and one NCAA Tournament showing.

“He [O’Dowd] did a great job for us in so many different areas, especially recruiting,” the former head coach at Arizona State, Rob Evans, said. “He is innovative and creative, and that is what made him a great part of our staff.”

O’Dowd was an assistant coach at the University of Mississippi from 1993-98 where he was primarily responsible for scouting, scheduling, and game and practice preparation. Here he also handled on-campus recruiting duties and helped coordinate recruiting efforts of all staff members.

During his time at Ole Miss, O’Dowd helped to recruit and coach a Southeastern Conference Player of the Year award winner. He also assisted the team to two SEC West Championships, two NCAA Tournament appearances, the first time in school history the team had back-to-back appearances in the NCAA tournament, and the first back-to-back 20-win seasons since 1937-38.

“Dan has enjoyed a successful career with multiple national tournament appearances. More importantly, he is beloved by his former colleagues and players. Coach O’Dowd commits to his players’ success on and off the court.  He will be a wonderful addition to our campus community and to Lindsborg,” President Jones said.

Before Ole Miss, O’Dowd spent two years as an assistant coach and assistant athletics director at Barton County Community College in Great Bend, Kan. His coaching responsibilities included recruiting, scouting, practice planning and game preparation. O’Dowd also handled all team travel as well as work-study jobs and the acquisition of financial aid for players. He also assisted with scheduling, academic advising, and the recruitment of players.

O’Dowd helped get his Barton teams to back-to-back NJCAA Regional Tournaments, as well as mentoring a National Junior College Player of the Year.

O’Dowd completed graduate coursework while he was a graduate assistant coach at Kansas State University from 1989-1991. While at K-State, he helped the team to an NCAA Tournament appearance.

Prior to his experience in college athletics, O’Dowd began his career as an assistant coach at Topeka High School.

“In Coach O’Dowd, we have hired a coach who can honor the legacy of Coach Oleen, connect with potential student-athletes, and build from an impressive background at the highest level of intercollegiate basketball. It’s not often that the search committee as well as all involved in the interview process have similar thoughts about the top candidate, Coach O’Dowd,” Pavlovich said.

O’Dowd has a Bachelor of Arts degree in secondary education from Bethany College. O’Dowd comes to Lindsborg with his wife, Ginger, and their two sons, Trey (18), and Conner (16).

“I am anxious to get to campus and start working with the young men in the basketball program as we strive to win championships and represent Bethany College, its students, fans, alumni, and the entire Smoky Valley community in a first-class manner,” said O’Dowd.

“I am very pleased that our next basketball coach at Bethany College continues the legacy of George Stephens. Coach Stephens was one of Coach O’Dowd’s mentors here at Bethany College, along with Jim Krob. I feel like he will be a great fit for Bethany College, he understands how special this place is,” former Head Men’s Basketball Coach, Clair Oleen said.