Falcons knock off No. 14 Braves for first win 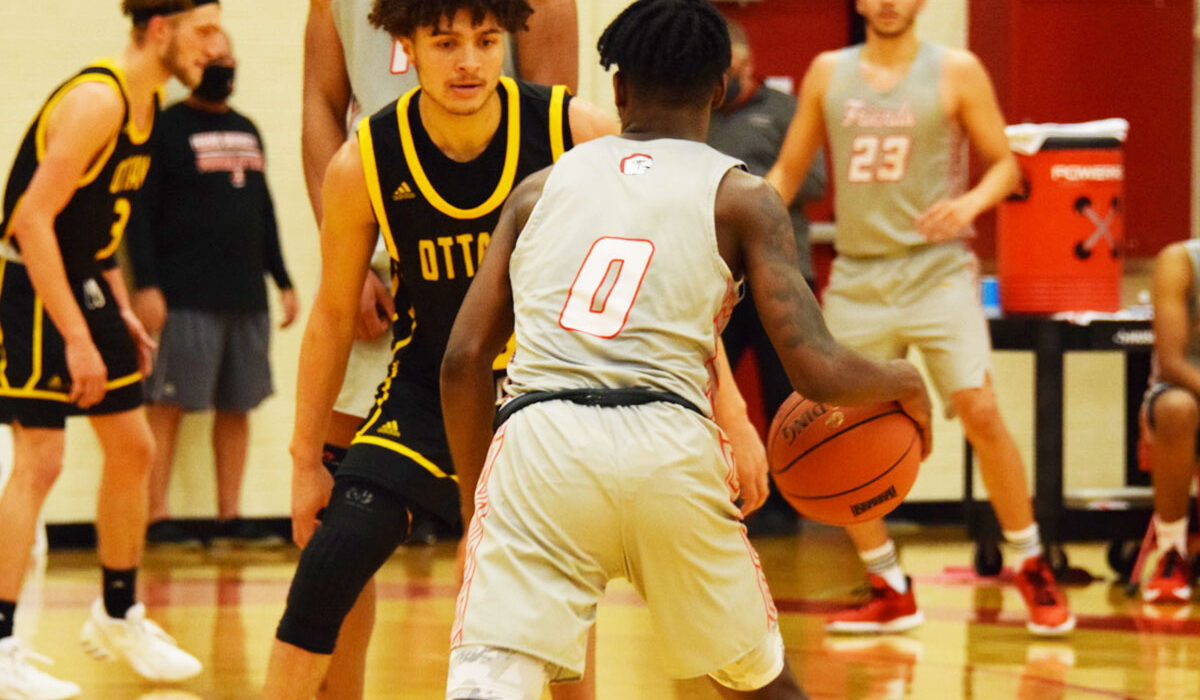 WICHITA – The Friends University Falcons used a game-deciding second half run to upend the No. 14-ranked Ottawa University Braves for their first win of the season Wednesday inside the Garvey Center.

The run occurred at the point when a three by Jaquan Daniels had given Ottawa a one-point edge of 59-58 with 7:24 remaining.

The Falcons clamped down defensively from there, forcing the Braves into eight straight misses from the field that laid the groundwork for the decisive surge.

A putback by PJ Medrano served as the springboard for a 9-0 spurt that gave the Falcons control of the game.

T.J. Williams also scored a pair of buckets, including a three-point play that put Friends up 67-59 at the 4:16 mark.

Following a free throw by Perry Carroll that temporarily halted the run, Ian Konek drilled a three that helped extend the burst to 14-1 and made it a 73-60 advantage.

The Falcons had to withstand one final push from the Braves, as a score by Carroll and three from Daniels cut the lead to 78-73 with 22 seconds left.

But Nick Rumbo made both free throws on the next possession to help the Falcons close out the victory.

“I’m proud of the effort and attitude shown in almost every situation tonight, said head coach Dale Faber, who moved within eight victories of 300 for his career tonight. “What we did wrong will jump off the stat sheet and slap us but we overcame that with some solid play in areas that don’t show up on the stat sheet.”

With both teams coming off a lengthy layoff, offense was sluggish in the early going.

The Falcons managed to jump out to a 13-6 lead and were still up six when threes by Jackson Mallory and Mason McDow pulled Ottawa even at 17-17.

After a three by Davonte Pack put the Falcons back in front, Daniels scored six points to key a 13-2 run to put the Braves ahead by eight, 30-22 with 3:13 left in the opening half.

A three by Konek helped stem the tide for the Falcons before a three-point play by Williams late in the half trimmed the Ottawa lead to 33-29 at the break.

The Falcons dominated the interior, outrebounding the Braves 56-34, with scoring edges of 28-6 in the paint and 19-7 in second-chance points.

“We are improving defensively and obviously we took care of the boards pretty well,” Faber said.

Pack paced the Falcons (1-5, 1-2 KCAC) with a double-double season-high output of 22 points and 12 boards, with Williams adding a career-high 20 points. Rumbo came off the bench with a career-high 15 points and Tazmine Dunn recorded a career-best 10 boards for the Falcons.

Daniels led all scorers with 30 points and Carroll finished with 18 for the Braves, who fall to 2-1 on the season and now 0-1 in the KCAC.

The Falcons will next host McPherson College Saturday afternoon at 2 p.m. inside the Garvey Center.

“It is great for us to look at the offensive stat line and see four guys in double figures and no one over 10 shot attempts,” Faber said. “If we continue to be unselfish and play hard good things will happen. We don’t have much time to enjoy this as we are looking at six more games in the next 13 days. All of our guys must be prepared each and every night.”