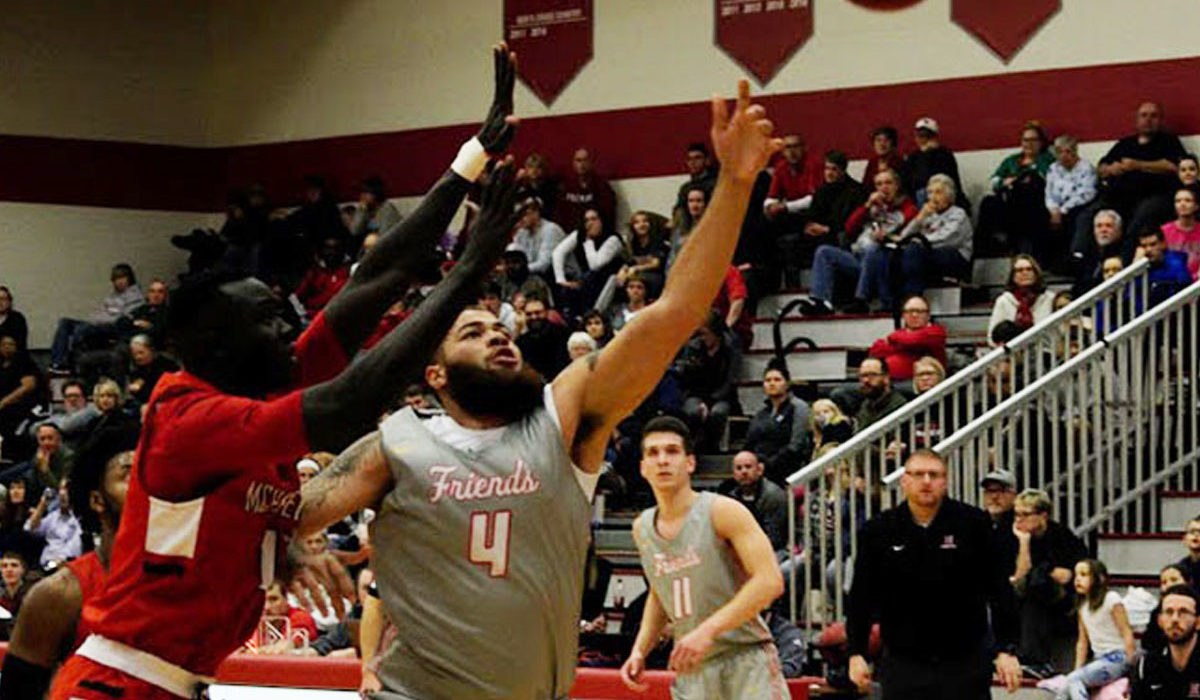 LINDSBORG – The (RV) Friends University Falcons led throughout in knocking off the Bethany College Swedes 90-84 for their fifth straight win Monday night in Lindsborg, Kan.

The victory pushes the Falcons to 7-3 in the KCAC and into third place in the league.

Jordan Murdock (SR/Wichita, Kan.) got the Falcons off to a good start, scoring the first seven points of the game less than a minute into the contest.

Friends never trailed and after the Swedes climbed within one, Luke Evans (FR/Wichita, Kan. ) swished a three and Vernon Vaughn (SR/Kansas City, Kan. ) scored on a putback to stretch the lead back to six.

Leading by four, the Falcons got scores from Tate Vang (SO/Goddard, Kan. ) and Atir Cherne (SR/Wichita, Kan.) that ignited a 14-2 spurt over the final 3:48 of the first half.

Jordan Murdock finished the run with a three-point play that gave the Falcons a commanding 43-27 lead at the break.

The Falcons kept the Swedes at arm’s length for much of the second stanza and twice extended the lead to a game-high of 20 points, with the last time coming at 61-41 at the 12:27 mark.

But Bethany had a charge in them and got eight points each from Isaiah Saenz and Tyler Larkin that keyed a 15-2 burst and closed the Falcon lead to just two at 77-75 with 2:26 left.

A bucket by Vaughn then provided a strong answer for the Falcons that increased the lead back to two possessions at the 1:49 mark.

Following two free throws by Lavaris Duncan that again brought the Swedes within two, James Conley (JR/Derby, Kan. ) calmly drilled a huge three with 1:05 left to give the Falcons a five-point lead of 82-77 with 1:05 remaining.

After Saenz answered with a three for the Swedes. Murdock hit two free throws and Conley followed that with four freebies over the final 26 seconds to seal the win for the Falcons.

“Any win on the road is nice, but we lost our way defensively and in a few other areas,” Friends head coach Dale Faber said.

“We made a few big baskets down the stretch but really it shouldn’t have come down to that. Glad we won so our guys don’t have to kick themselves over the result.”

Conley scored 12 and dished out a team-best five assists, while Vaughn and Zion Fralin (SO/Wichita, Kan. ) each scored 10.

Larkin paced the Swedes with 29 points, with Saenz and Duncan each scoring 22. Duncan also posted a team-high 10 boards for Bethany, who fall to 7-6 overall and 4-4 in the KCAC.

The Falcons will now take time off for the Christmas Break before travelling to Orange City, Iowa to compete in the Northwestern/Pizza Ranch Classic on Dec. 28-29.