Sabrowski drafted in 14th round by San Diego Padres 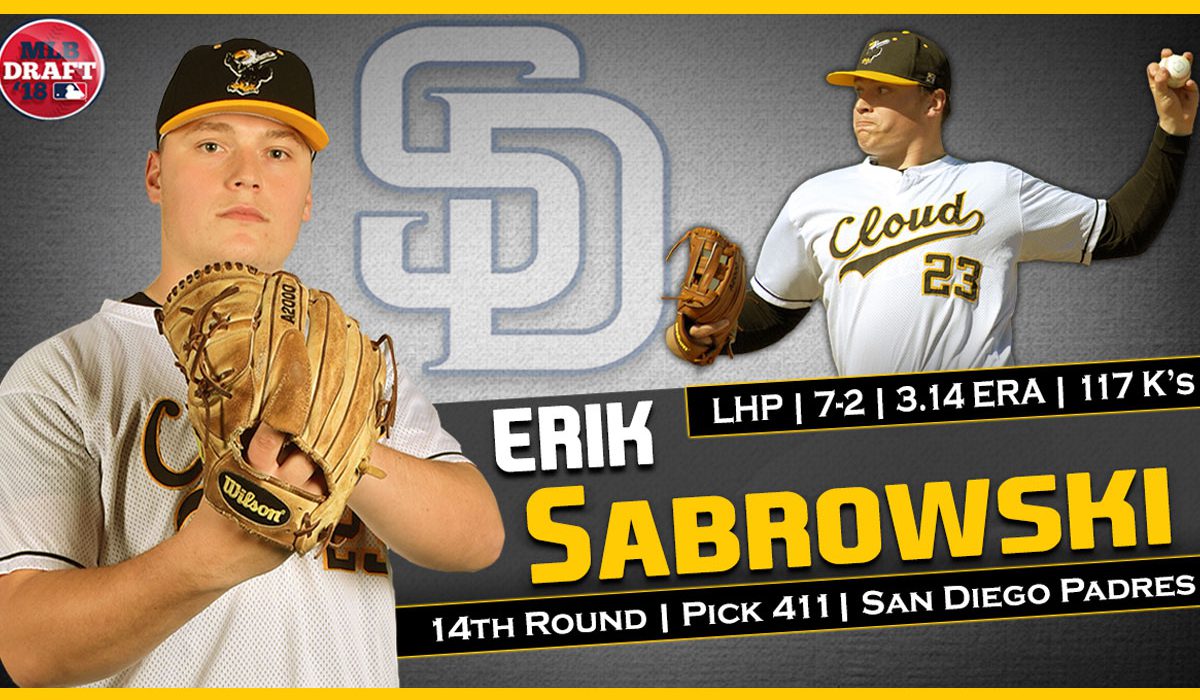 As Sabrowski tended to bacon and eggs back home in Edmonton, his name flashed across the screen as the 411th overall pick of the San Diego Padres in Round 14 of the 2018 Major League Baseball (MLB) Draft.

“I had the draft up on my computer and was kind of loosely following along,” Sabrowski said. “I was making breakfast when my girlfriend (Renee Ouellet) yelled out ‘You just got picked!'”

A few seconds later, Sabrowski was on the phone with Steve Moritz, a Kansas area scout for the Padres who had looked on as Cloud County’s left-hander mowed over Kansas Jayhawk Community College Conference (KJCCC) hitters this past spring.

“It’s surreal. I kind of blanked out for a second and just stood there,” Sabrowski said. “(Being drafted) has been a culmination of a lot of years of hard work. I thought about all the people I need to thank because I didn’t go at this alone. It’s exciting to think about being a member of professional baseball.”

Sabrowski is the fifth player to be drafted out of Cloud County and the first since 2007 when Jake Diekman, currently with the Texas Rangers, was picked in the 30th round by the Philadelphia Phillies.

He and the Padres will now enter contract negotiations. If the two parties agree on a contract and signing bonus, Sabrowski will begin his journey through the San Diego farm system.

Sabrowski also has the option of attending the University of Louisiana Monroe, a NCAA Division I program in the Sun-Belt Conference, which he signed with in the fall of 2017.

The 20-year-old burst onto the national scene, and onto the radar of professional scouts, after putting together a 2018 season that saw him go 7-2 overall with a 3.14 earned run average — 1.56 ERA in conference games — and a school-record 117 strikeouts in 66 innings pitched.

He also had the third highest strikeout per nine innings (15.95) of all NJCAA Division I pitchers. Sabrowski’s resume earned him KJCCC West Pitcher of the Year honors and a First-Team All-Region selection in the Region VI.

Sabrowski proved to be a duel-threat, earning All-Conference Honorable Mention as a first baseman and designated hitter. He finished with a slash line of .355/.475/.663 while leading the T-Birds in home runs (11) and runs batted in (58).

Prior to arriving in Concordia, Sabrowski said he thought his future in baseball was as a position player.

“This wasn’t something I envisioned when I decided to come to Cloud County,” said Sabrowski about being drafted as a pitcher. “I came in looking for an opportunity and an offer from a school. I came into this year kind of looking for an identity of what I’d end up being.”

As the fall and spring seasons each progressed, it became evident the 6-4, 245-pound southpaw had big league tools on the mound as he showed a fastball that touched 93 mph and good command (26 walks in 66 innings) of his four-pitch mix.

“We are incredibly excited for Erik and his family. His story will be one we tell around here for a long time and we look forward to following his career, hopefully all the way to the major leagues,” said Cloud County head coach, Eric Gilliland. “His pitchability is incredible for the fact that he has not really focused solely on pitching at any point in his career. He has a good fastball and three quality off-speed pitches. That combined with his high level character and competitiveness made him a very highly sought after player.”

Sabrowski said he will spend the next few days weighing his options as he decides between signing a professional contract or continuing his collegiate career as a junior at ULM.