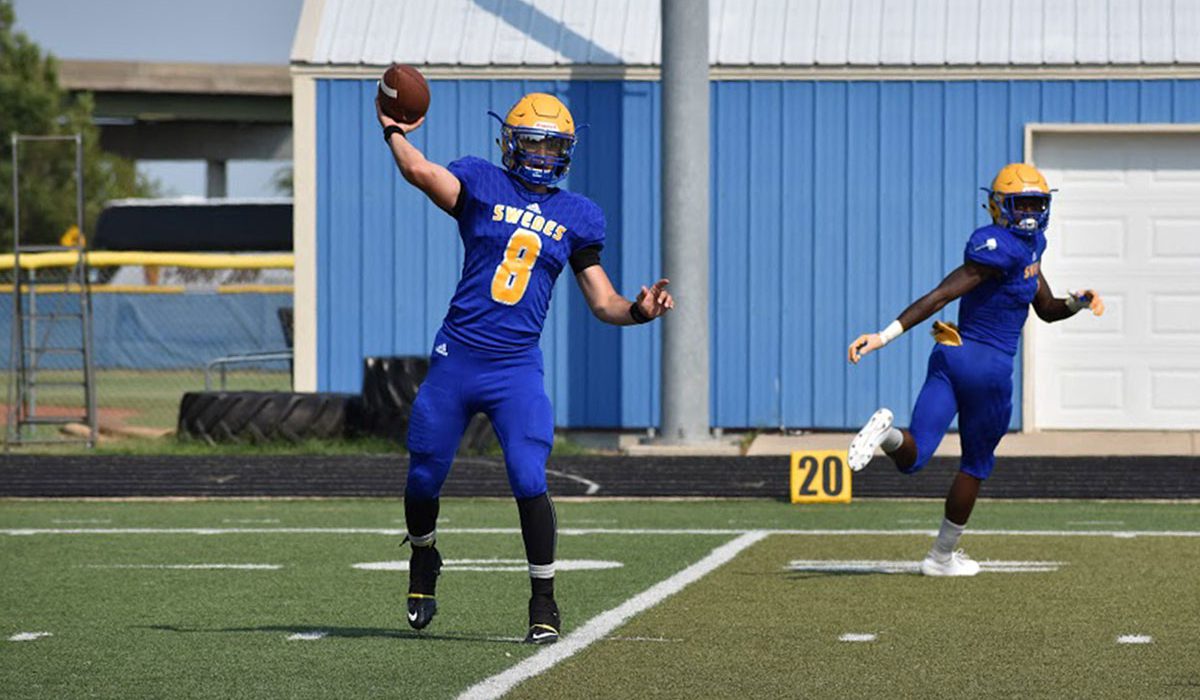 LINDSBORG – The Swedes football squad picked up a win in their first conference matchup of the season. After multiple lightning delays caused last night’s game to be suspended to today. Bethany defeated the McPherson Bulldogs, 57-43, with the help of Isaiah Salazar’s, junior quarterback, record day.

McPherson got on the board first with a three-play 80-yard drive to score seven minutes into the game.

However, the Swedes answered on their next drive when Salazar connected with Dalton Goodwin, junior wide receiver, for an 18-yard touchdown pass.

Bethany then took the lead in the start of the second quarter with a pass from Salazar to Rodney Molette, junior wide receiver, for a 26-yard touchdown pass. This one-play drive started when Jau’marl Clark, junior linebacker, forced a Bulldog fumble that was recovered by Damien Bell-White, senior defensive back.

The Bulldogs answered with a touchdown of their own to tie up the game at 14. But the Swedes were not done yet. In six plays, Bethany marched down the field to score on another Salazar pass. Salazar connected with Michael Milbourne, junior wide receiver, for a six-yard touchdown pass. Bethany then scored again with just 23 seconds left in the first half when Michael Wimberly, senior wide receiver, caught a 21-yard touchdown pass from Salazar.

After taking a 28-14 lead into the locker room, the Swedes came out after half time on fire when Javan Moore, junior defensive back, returned the opening kick-off for 86 yards, just shy of scoring a touchdown of his own. The Swedes finished what Moore set up with a one-yard touchdown pass from Salazar to Wimberly.

However, McPherson started trying to come back, with a 32-yard field goal, followed by two touchdowns all in the third quarter. However, both of the Bulldogs’ extra point attempts were stifled by the Swedes. After the first touchdown, McPherson tried to go for two and Bethany’s Greg Harvey, freshman linebacker, intercepted the pass. Then on the next touchdown, the Bulldogs attempted a PAT kick which was blocked by Moore.

The Swedes got their offense going again at the start for the fourth quarter when Salazar and Jafar Thomas, junior runningback, connected for a 28-yard touchdown pass. Salazar then tossed a two-point conversion pass to Molette to give the Swedes a 43-29 lead.

McPherson then answered with a touchdown of their own.

However, the Swedes kept striking when Aaron Knox, freshman running back, rushed for one yard with 6:47 left to play. But the Bulldogs answered with a touchdown with a minute and half left to play.

The Swedes had the last say when Salazar again connect with Molette, this time for a 50-yard touchdown.

With his seven touchdown passes, Salazar set new school record. The junior completed 30 of 48 passes for 410 total passing yards. Thomas led the ground assault for the Swedes with 17 carries for 64 yards. Molette notched to most receiving yards for Bethany with nine catches for 199 yards.

On defense, Bell-White was the Swedes lead with eight total tackles in addition to his fumble recovery. Four Swedes notched seven tackles; Moore, Chris Owens, senior defensive back; Oscar Scott, sophomore linebacker; and Rhett Mizer, junior defensive back. Scott also had a solo sack for a loss of two yards, got in on another tackle for loss and broke up one pass. Mizer had one tackle for a loss of two yards, along with one pass break up and one forced fumble.

The Swedes are back in action again this Saturday, September 23 on the road at Bethel College in North Newton, Kan. Kick-off for this KCAC contest is set for 7 p.m.