Whitaker to Whisby combo proves fruitful for Falcons in win 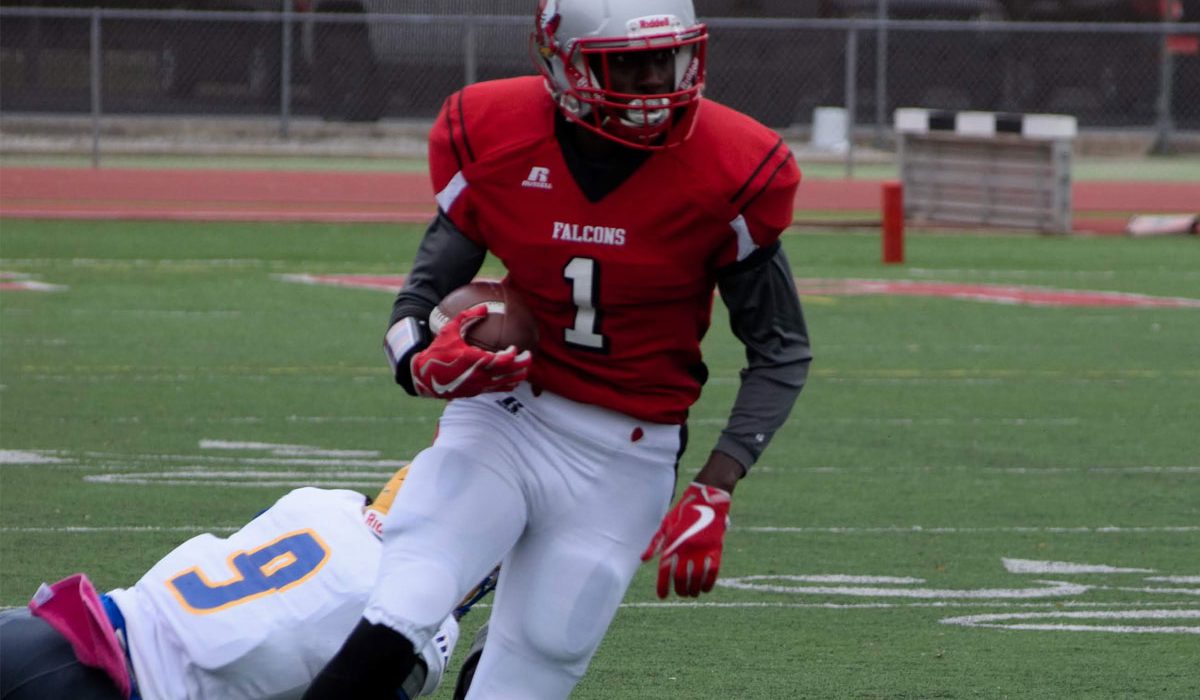 WICHITA –In front of a national ESPN3 audience on Homecoming, seniors Brennan Whitaker and Glen Whisby produced career days to fuel the Friends University Falcons to their first victory of the season, a 48-34 win over the Bethany College Swedes in a KCAC shootout Saturday at Adair-Austin Stadium.

Whitaker finished with a career-high five touchdown passes and a career-best 386 yards, while Whisby recorded career marks in both receptions (seven) and receiving yards (170).

After the Swedes scored to take their first lead of the day at 20-14 with 5:44 left in the first half, Whitaker threw touchdown passes to Michael Littleton and Cade Nagy to start a run of 28 unanswered points for the Falcons and make it 28-20 at the half.

Quincy Brown then extended the lead with a one yard touchdown run, his first career score with 6:15 left in the third.

Following a three and out effort by the Falcons’ defense, Whitaker found Devon Anderson for his first career touchdown on the first play of the drive for a 67 yard touchdown to balloon the lead to three possessions at the 5:05 mark of the third.

The Swedes then got a turnover and took advantage when Isaiah Salazar threw a 34 yard touchdown to Jafar Thomas one play later.

But Triton Douglas blocked the extra point attempt to keep it a 16 point lead for Friends.

On the Falcons’ next possession, Whitaker and Whisby hooked up for a 21 yard score to push the lead back to 21 points and 48-26.

The Swedes didn’t go quietly as Salazar hit Thomas for another score to create what would be the final margin of victory for the Falcons.

Once Bethany got the ball back, the Falcon defensive unit stepped up and forced a turnover on downs to preserve the victory.

“Today, we competed the entire game, finished drives with touchdowns and made big stops when we needed to.”

Both offenses got off to electric starts, as each team scored touchdowns on their opening two drives of the game.

On the first possession of the contest, a solid return by Blake Crandall gave the Falcons good starting field position and Whitaker paid it off by hitting Whisby for a 35 yard touchdown to give Friends the early lead.

The Swedes answered with a 60 yard scoring drive of their own, but their extra point attempt was blocked by Jeremiah Pharms to keep the Falcons on top.

Friends marched down the field again behind a great effort from Noah Diaz. Diaz had a 13 yard run and 16 yard catch before capping the drive with a 20 yard touchdown run.

Bethany again responded as Salazar threw the first of his three touchdown scores to Thomas to make it 14-13 with 3:18 still left in the opening period.

Littleton caught four passes for 34 yards and Anderson totaled two receptions for 77 yards, the first two catches of his career.

Whitaker’s 386 yards and five touchdowns came on 22-of-31 throwing overall.

Whisby’s two touchdowns are his first scores of the season and tie his career-best output.

Salazar also passed for five scores for Bethany, completing 26-of-51 for 337 yards along with two interceptions.

Thomas finished with nine catches for 140 yards and Quaylon Jones rushed for a team-best 64 yards for the Swedes (1-6, 1-5 KCAC).

“This group has stayed together through a very tough start to the season and deserves to feel good about themselves,” Meneley said.

The Falcons will next play at (RV) Avila University next Saturday (Oct. 13) at noon in Kansas City, Mo.