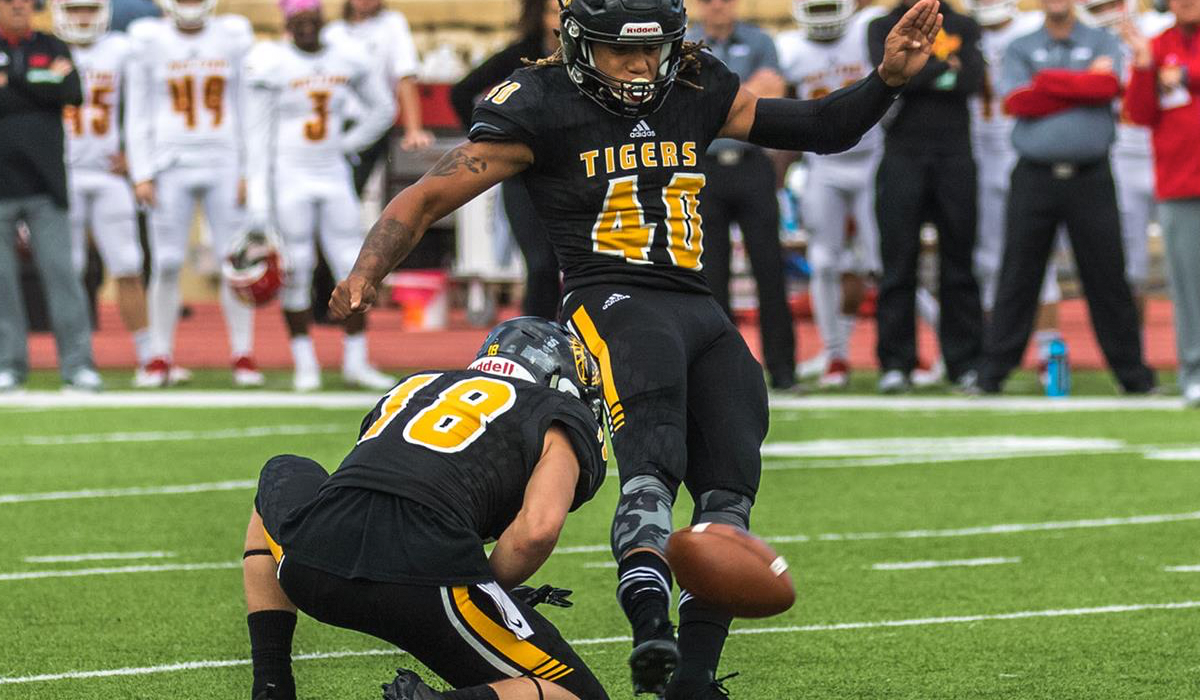 BROOKFIELD, Ill. – Senior placekicker Dante Brown repeated as the Don Hansen Football Committee National Special Teams Player of the Year for 2019. Along with the honor, Brown is an All-America First Team selection at placekicker by the committee for a second-straight year. Brown received All-America honors from five organizations for the 2019 season, four being first-team selections.

Brown is the Don Hansen National Special Teams Player of the Year for a second-straight season. In 2019, he averaged 1.72 field goals per game, succeeding on 19-of-23 attempts. He added in a school-record 52 PAT makes for 109 points on the season. He racked up 232 points over two years, making 47 field goals and 91 PAT tries as the Tigers’ kicker.

In 2018, Brown had one of the most successful kicking seasons in NCAA Division II history, converting 28 field goals out of 33 attempts. His 28 field goals in 2018 were second most for a season in Division II history, only two shy of the record 30 set by Jeff Glas from the University of North Dakota in 2005. Brown broke the MIAA record of 25 made by Simon Mathieson in 2015, but Mathieson set that record in 15 games played compared to just 12 for Brown. Brown also broke Mathieson’s MIAA record for attempts in a season. His 123 points in 2018 set a new FHSU single-season scoring record.

Even with his impressive accolades at kicker, Brown was also an All-America selection at punter in both 2017 and 2018 for Fort Hays State. He served as both the team’s kicker and punter in 2018, earning All-MIAA First Team accolades at both positions. He averaged 41.4 yards per punt in 2018 with 14 attempts going for more than 50 yards. He tied the school record for longest punt with an 84-yard boot. In 2017, he served solely as the team’s punter and averaged 43.5 yards per attempt, which included 21 attempts going for more than 50 yards. Over the two years in a punting role, he averaged 42.4 yards per attempt, second best in FHSU history.

Brown was a finalist for the Fred Mitchell Outstanding Placekicker Award for a second straight year in 2019. The award is given annually to a Football Championship Subdivision (FCS), Division II, Division III, NAIA or NJCAA placekicker that excels on the football field and in the community. Luis Aguilar of Northern Arizona University (FCS) received the award this year. Brown was one of three kickers from NCAA Division II to make the finalist list.