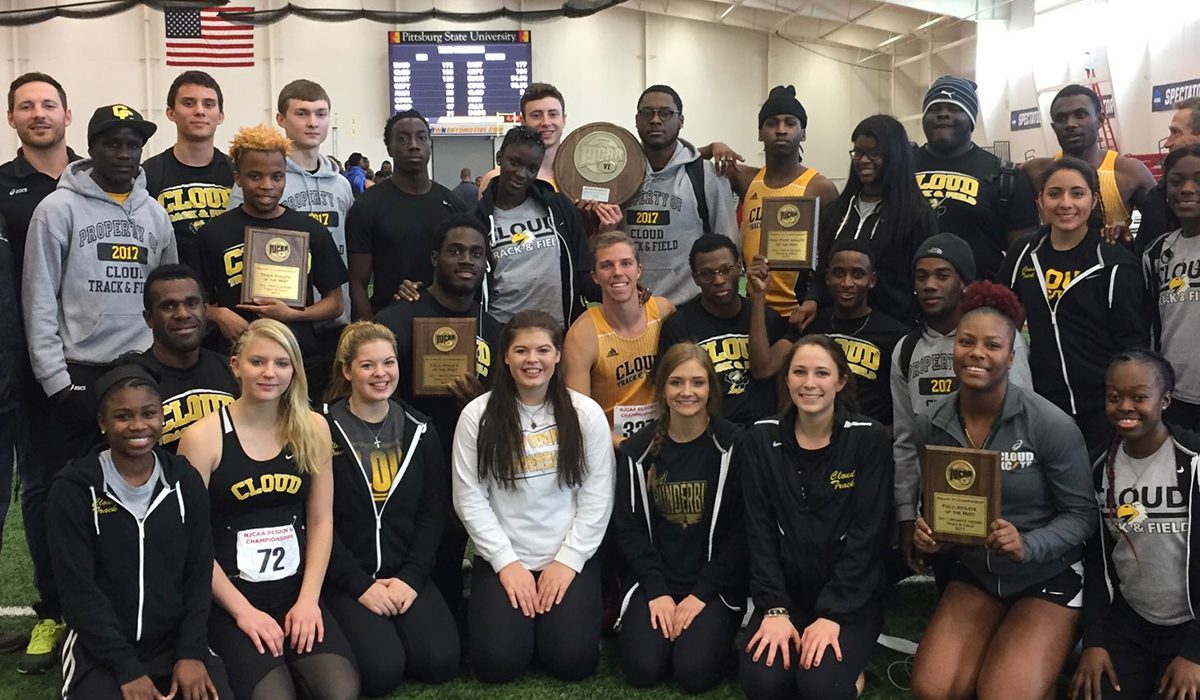 PITTSBURG, Kan. — The hardware piled up for the Cloud County Community College track and field teams over the weekend as the T-Birds competed at the Region VI/KJCCC West Multis hosted by Pittsburg State University.

Cloud County women’s also notched a top-5 finish in the Region VI standings, coming in at the No. 5 spot in the region and finishing third in the KJCCC West team standings.

Dirane finished second in the 3,000-meter and 5,000-meter runs to his teammate and fellow South African, Thobile Mosito, who was named the Men’s Track Athlete of the Meet.

The Cloud County men’s team was just as solid in the field, highlighted by sophomore thrower Rajindra Campbell’s school record-setting performance in the shot-put. Campbell won the event with a throw of 17.50 meters, edging his teammate freshman Vashon McCarthy (17.40 meters), who had set the previous school record earlier this year on Jan. 28 with a toss of 17.21 meters at the Jayhawk Classic.

Campbell was named the Men’s Field Athlete of the Meet.

Not to be outdone, Cloud County sophomore thrower Nayoka Clunis won the Women’s Field Athlete of the Meet after sweeping the throwing events, including a school record of her own in the women’s weight throw.

Her throw of 19.32 meters topped the 2003 mark of 19.23 meters set by Tamara Burns in 2003. Clunis’ performance ranks first among all NJCAA athletes in the event this season by nearly a full meter.

Clunis also won the women’s shot-put event with a throw of 14.37 meters.

Freshman thrower Gabbreil Harris-David showed her potential as she finished second in the weight throw (16.50 meters) and sixth in the shot-put (12.22 meters).

Adding to Cloud County’s dominance in field events was the performances by Halie Turner and Chance Chrisman as the T-Birds swept the pole vaulting events. Turner won the women’s event with a mar of 3.35 meters, while Chrisman took first in the men’s event with a vault of 4.50 meters.

Other top performances included a pair of top-5 finishes by freshman Ariel St. John. She finished third in the 600-meter run and posted a national qualifying time in the 1,000-meter run (3:09.18) en route to a second place finish.

Sophomore Ramel Mason added a third-place finish in the triple jump with a leap of 14.53 meters, and in the heptathlon Jared Pfeifer and Robson Yinambe finished in second and fourth place, respectively.

Up next, Cloud County will head to the Nebraska Wesleyan Open in Lincoln, Nebraska this Saturday. It will serve as the final tune-up for the T-Birds before they head back to Pittsburgh State on March 3-4 for the NJCAA National Indoor Championships.