ESU improves to 2-0 with two-point win at FHSU 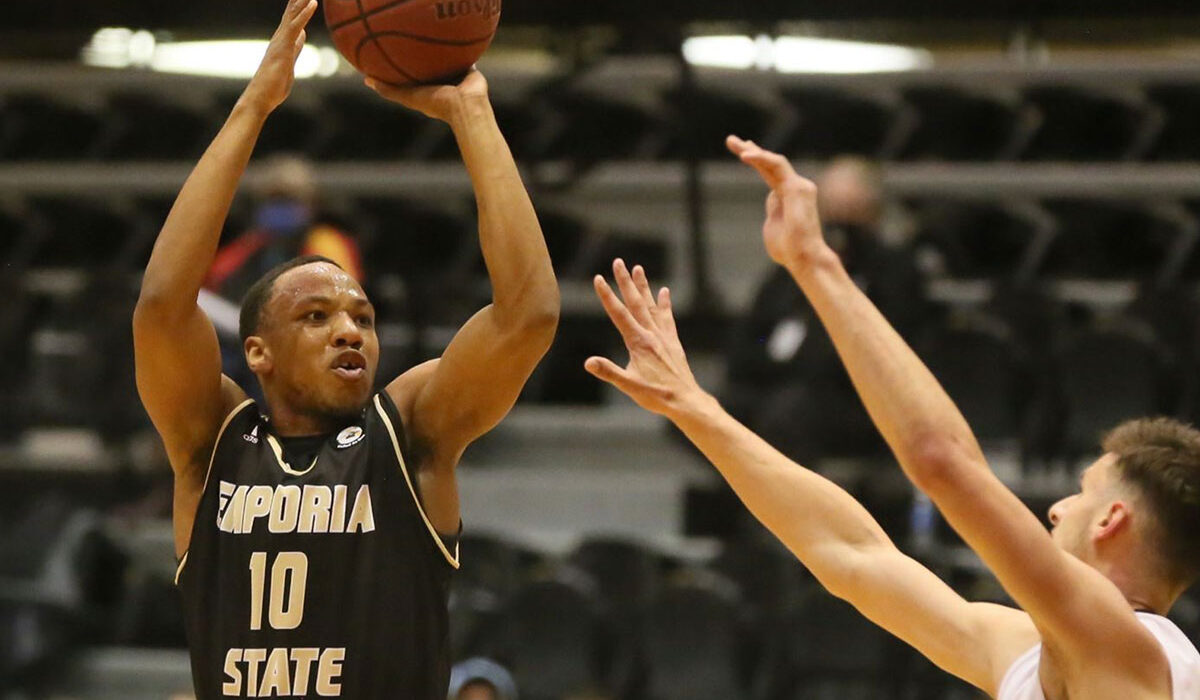 HAYS – For just the second time in school history the Emporia State men have opened MIAA play with two road wins as they defeated Fort Hays State, 68-66, on Saturday afternoon in Hays, Kan.

Unlike Thursday’s win at Neb.-Kearney which saw the Hornets jump out to a big lead and never look back, this game saw 12 ties and 14 lead changes with neither team taking more than a four point lead. The teams were tied at 6-6 when the first media timeout hit with 14:43 left in the half. Marquis McCray would score the next four points for the Hornets to give them a 10-7 lead with 13:36 remaining. The Tigers then went on a 7-0 run to go up 14-10 before Mason Thiessen broke the run at the 9:50 mark.

Ben Smith dunked off a pass from Dallas Bailey to ignite a 7-0 run for the Hornets that was capped by a Jumah’Ri Turner pull up jumper with 6:40 left to give ESU a 19-16 lead. Austin Downing drove the lane with 3:14 left to put the Hornets up 27-23 before Fort Hays State scored the next five points to retake the lead. Haggan Higendorf hit a mid-range jumper to give the Tigers a 30-29 lead with 31 seconds left. Turner then beat the buzzer with a three-pointer from the top of the key to send the Hornets to the locker room with a 32-30 lead. That three snapped a string of 19 consecutive misses from beyond the arc for Emporia State.

The Hornets maintained a lead of between 1-4 points through the first six minutes of the second half before Bjarni Jonsson scored on a putback for the Tigers to tie the game at 41 with 13:31 left. Mason Thiessen hit a three-pointer and was fouled with 12:03 and his completed four-point play gave Emporia State a 47-43 lead with 12:03 remaining. Fort Hays State responded with a 6-0 run and Jared Vitztum’s two free throws at the 9:16 mark gave the Tigers a 49-47 lead. Vitztum hit two more free throws with 5:03 left to push the Tiger lead to 58-54 before Downing drove the lane for another layup to send the Hornets into the final media timeout down by two.

Downing hit two free throws with 2:32 left to knot the score at 60-60. With 1:39 left Downing stripped the ball from Vitztum and fed Brenden Van Dyke for a break away dunk that gave the Hornets a 62-60 lead. The Tigers’ Kaleb Hammeke hit a pull up jumper with 1:05 left to beat the shot clock and tie the game at 62. Van Dyke was fouled with 43.3 seconds left and hit the first of two free throws to give ESU a one point lead. He missed the second but Downing secured the rebound to keep possession with the Hornets. Dallas Bailey drilled two free throws with 23.2 seconds left to put the Hornets up 65-62.

Hammeke scored quickly for the Tigers to make it 65-62 with 15.7 left. Downing then drew a foul with 11.5 seconds remaining and hit both ends of the one and one to put Emporia State up 67-64. With a three-point lead the Hornets fouled with 5.9 left and Alvin Thompson hit both free throw to make it a one point game. Turner, who was third in the nation in free throw percentage last season, was fouled with 3.5 seconds left and hit one of two to give the Hornets a 68-66 lead. The Tigers got the ball inbounds to Hammeke but Bailey was able to get in front of him and force him to change direction before taking a last second shot from just past half court that was wide right and Emporia State pulled out the two point victory.

The Hornets are scheduled to wrap up their season opening three game road swing on Saturday, November 28 when they travel to Northeastern State. Tip-off from the NSU Events Center in Tahlequah, Okla. is set for 3:30 p.m.