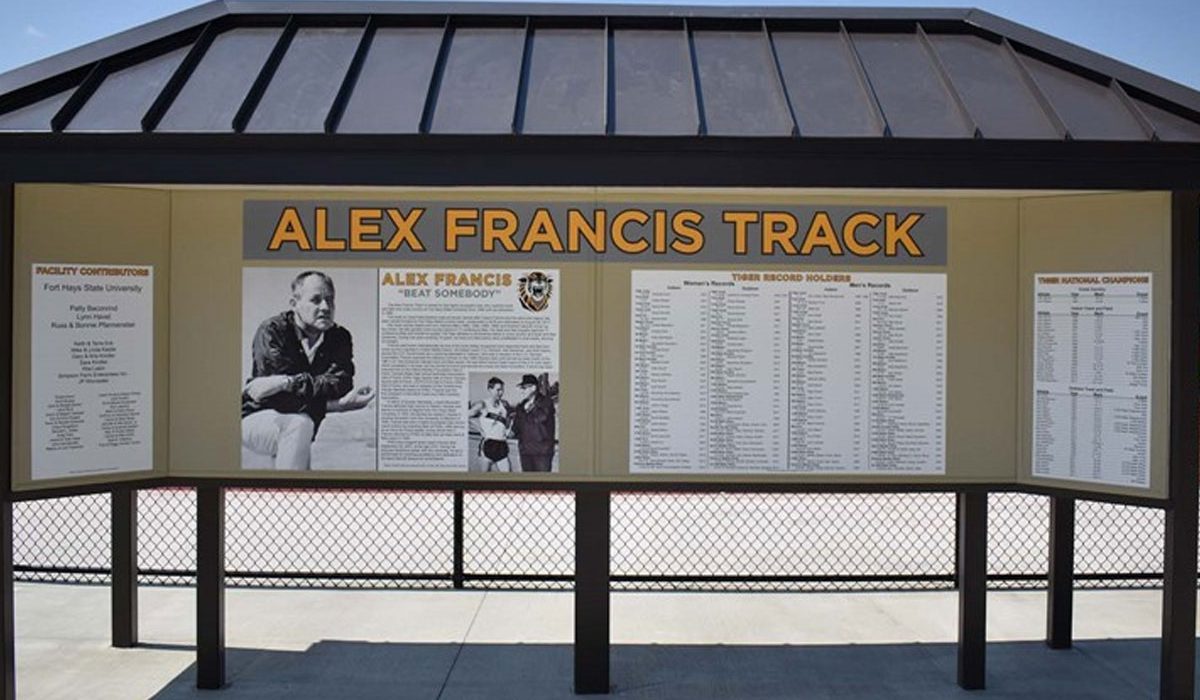 HAYS – On Saturday, Aug. 26, Fort Hays State University held the dedication of its new Track and Field Facility, along with naming the track “Alex Francis Track”. Several members of the Hays community, along with current and past athletes and coaches, were on hand for the dedication ceremony.

The FHSU Track and Field Facility consists of a nine-lane, 400-meter, all-weather running track and a full complement of field event areas. The current site was chosen more than two years ago and construction of the $3.28 million facility began in April of 2016. The complex includes a press box and fixed bleacher seating for 500 spectators on the east side. Other structures provide field equipment storage, a training room, a meeting room, and public restrooms. Construction completed in December of 2016 and the facility hosted three track and field events in the Spring of 2017. Installation of a new timing and results board occurred in August of 2017 and future upgrades include the addition of lights to the facility as funding becomes available.

The track is named for Alex Francis, the highly successful man who coached track and field and cross country at Fort Hays State University from 1946 until his retirement in 1980. The track at Lewis Field Stadium was previously named after Coach Francis and his name and legacy has been carried forward to Fort Hays State’s current track, constructed in 2016 and dedicated on August 26, 2017. His cross country teams won four national titles (1963, 1965, 1968, 1969) and finished national runner-up four times. He also guided cross country teams to 11 conference titles. His track and field squads captured 17 conference titles and overall he guided 139 Tiger athletes to All-America status in cross country and track and field combined.

The javelin event area at the facility has been named in honor of the late Zach Kindler, who was a four-time All-American in the event. At the age of 35, Kindler passed away unexpectedly during his highly successful tenure as track and field and cross country coach at Baker University in 2014. He was recently inducted into the Tiger Sports Hall of Fame and his family was present at the dedication to see his legacy live on at the new facility for FHSU Track and Field.

If you are interested in donating to future upgrades or the naming of an event area at the facility, please contact the FHSU Foundation at (785) 628-5620. There are still several naming opportunities available.