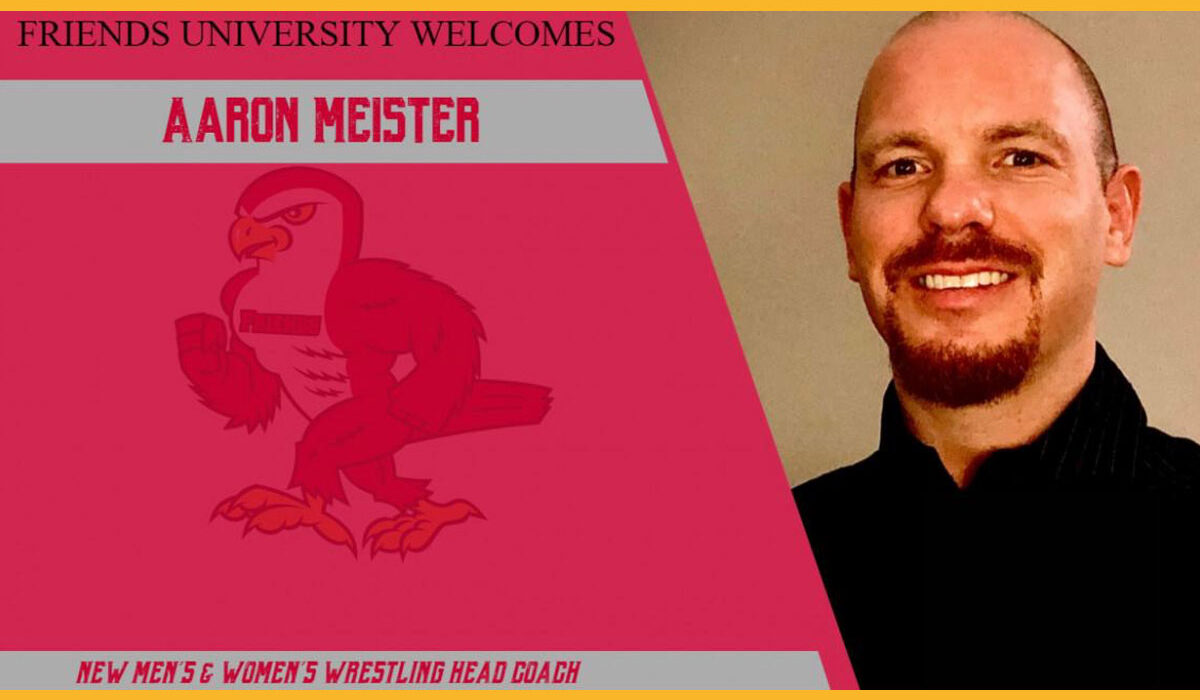 WICHITA – Friends University Director of Athletics Dr. Rob Ramseyer has announced the hiring of Aaron Meister as the head coach of the newly added men’s and wrestling programs.

“We feel lucky to attract a coach with the experience of starting and running a successful wrestling program,” Ramseyer said.  “Aaron brings a great deal of experience to the role and Christian higher education. We are confident he will build a quality program that will be successful in being competitive but also producing students who are engaged and will graduate.  We are excited to welcome him and his wife Jill back to Kansas.”
Meister is indeed familiar with Kansas after attending Holton High School, Labette County Community College and then graduating from Fort Hays State University.
He comes to Friends after helping to jumpstart the men’s and women’s wrestling programs as an assistant coach for four seasons at Wayland Baptist University (WBU) in Plainview, Texas. He then took the reins of the program after head coach legendary head coach Johnny Cobb retired prior to the 2014-15 season.
Meister’s decorated coaching career includes coaching a World Champion, Tamyra Mensah-Stock, four World medalists, 13 National Champions, 96 All-Americans, and the 2019 NAIA Women’s Dual Champions. Among those All-Americans is an Olympic Trials champion, two World Team Trials champions, three U.S. Open champions, a University World runner-up, and 25 of those individuals are either World or Olympic Trials qualifiers.
While at WBU, Meister initiated and endowed two scholarships (Johnny Cobb and Tamyra Mensah-Stock Wrestling Scholarships). He also created the Panhandle Wrestling Association of which he currently serves as President while also starting the Panhandle Wrestling Club.
“I’m honored and grateful to be selected by Dr. Ramseyer and all of the people that were part of the hiring process,” Meister said.
“Starting a new program is a massive undertaking. A task that requires optimism, wisdom, and patience. Ultimately, I decided to accept the responsibility of building a program because of the long term potential that Wichita offers in wrestling experience and community support. I have some ideas of how to utilize these resources to move the wrestling program forward, and am excited to share this vision with the community of Wichita. I’m excited to “Build the #Tower,” so Interested prospects are encouraged to complete the Friends University Athletic Questionnaire so we may learn more about them and share our vision for the program to those who want to make history!”
During his standout collegiate career, Meister captured three national championships (2019, 2018, 2014) in the Veterans Division of the U.S. Open.
At Fort Hays State University, Meister finished fourth at the 2004 NCAA D-II National Championships, won two Rocky Mountain Athletic Conference championships, and capped his collegiate career in 2006 with a fifth-place finish and First-Team Academic All-American honors. In 2003, he was NJCAA national champion, Academic All-American, and student-athlete of year at Labette Community College (Kan.).
In 2017, Meister was inducted to the NJCAA Wrestling Hall of Fame.
“This is a huge first step in creating a solid wrestling program at Friends University,” said Mike Church, Wichita Heights High School Athletic Director who helped with the search.
“Coach Meister is 100% the right man to lead this program. He has the pedigree of a champion and a great ability to get the most out of college student-athletes. He will instill everything needed to build a championship, faith-based program. I’m looking forward to watching this program being built into a championship caliber program.”
Meister earned a Bachelor of Science degree in Athletic Training in 2006 and also a Master of Science in Health and Human Performance with an emphasis in Sports Administration in 2009, both from Fort Hays State University.