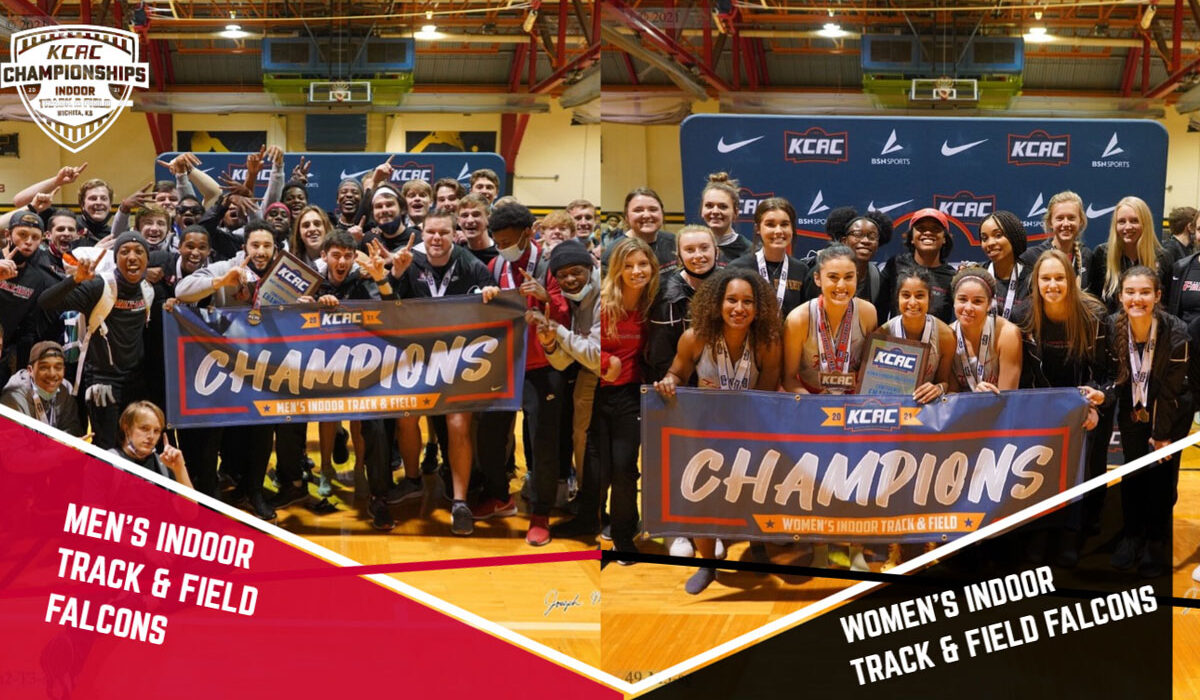 WICHITA, Kan. – The Friends University Men’s and Women’s Indoor Falcons each captured the KCAC Championship Saturday at the Heskett Center on the campus of Wichita State University.

The championship is special in a unique way for each program, as the Falcon Men breakthrough after three straight years finishing as the runner-up, while the Falcon Women are the KCAC’s top team for the seventh straight season to continue their dynastic reign.

The drama carried into the final day of the meet, as the Falcon Women and University of Saint Mary were tied with 167 points apiece heading into the final event, the 4 X 400 relay.

That set the stage for the unit of Elaina Henderson, Kaitlynn Massey, Aileen Gurrola and Aubry Donley to come through in clutch fashion to win the relay with a time of 4:03.75 to clinch the seventh consecutive title for the program.  The Women’s Falcons finished with 177 points overall to 172 for Saint Mary.

The final relay didn’t hold as much drama for the men, as a runner-up finish by Avery Stuever (1:22.32) in the 600 meters put the Falcons on top of Saint Mary by one point and then a third place showing from Cadin Gustafson (8.49) in the 60 meter hurdles helped the stretch the lead to eight points. The Falcons ended up coming out on top overall by a score of 202.50 to 195.50 for the Spires.

“What a battle to the end!” said Henry Brun, Friends indoor track & field head coach. “In our team meetings leading up to the championship meet, we emphasized the importance of responding to adversity because we knew this weekend wouldn’t be easy. On the men’s side, it was about surviving the second day of distance events and hanging onto the smallest of leads. On the women’s side, it was about knowing that we would have a hefty deficit going into the final day and we had to deliver in every event down to the 4×400.”

The first day of the meet got off to a roaring start for Friends, as Brayden Wells set a conference meet record in the Weight Throw with a mark of 18.19m.

The Falcons then swept the top three spots in the Long Jump behind the trio of Chiante Stewart (6.79m), Noah Myers (6.76m) and Gustafson (6.73m). The first day’s finishing touch was applied with a winning effort in the Men’s 4 X 800 relay team of Josiah Bolton, Eli Jacobson, Stuever and Logan Anglemyer (8:00.08)

In the Women’s 60 Meter run, it was Maria Botella-Manich (7.91) producing a key second place finish to pull the Falcons even overall and set up the dramatics in the final relay run.

For her two individual wins and contributions to a pair of relay victories, Gurrola was named the KCAC Women’s Indoor Track & Field Athlete of the Meet.

“I couldn’t be more proud of the fight every member of this team showed this weekend,” Brun said. “A huge credit also goes to my amazing coaching staff who helped inspire this team and keep them focused even when the odds were against us.”

The Falcons’ additional runner-up and top three finishers are listed below, for the full results of the KCAC Championship meet, click HERE.

“Now it’s time to rest up, tune up, and be ready for the NAIA National Meet in just a couple of weeks,” Brun said. “I’m excited to see us take the momentum from the conference weekend and deliver some quality performances against the best in the country.”