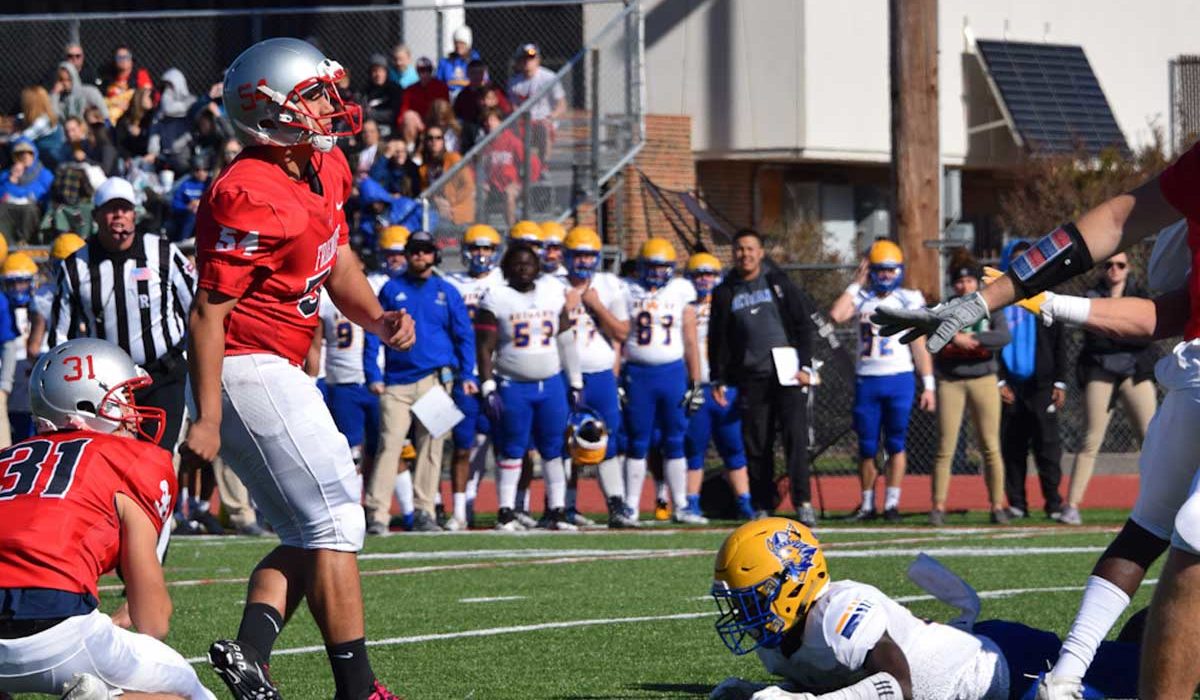 WICHITA, Kan. – In a game that featured five ties that eventually sent the game into overtime, it was a 38 yard field goal by Nick Navarro (SO/Wichita, Kan. ) in the extra period that allowed the Friends University Falcons to come away with a 34-31 victory over the Bethany College Swedes on Senior Day (Nov. 2) at Adair-Austin Stadium.

“I am extremely proud of the fight our kids showed today,” Friends head coach Dion Meneley said. “We had an up and down day, but found a way to finish on top.”
Down 31-24, the Falcons put together arguably their most effective drive of the season, marching 85 yards in 17 plays that chewed up 7:41 on the clock.
The Falcons came up clutch throughout the possession, converting six times on third down, including a nine yard scamper by Javonte Stewart on third and nine from the Bethany 35.
Stewart then hit Farres James (JR/Junction City, Kan.) for 20 yards before a one yard touchdown run by Marshall McShan (JR/Millville, NJ) tied the score at 31-31 with just 15 seconds left in the fourth quarter.
Once in overtime, the Falcon defense rose to the occasion, forcing a fumble that was recovered by Jordan Brookins (SR/Fort Worth, Texas) at the eight yard line.
That set up Navarro’s game winning try that sailed through the uprights from 38 yards away.
With the Swedes holding a 7-0 lead early in the second quarter, Stewart pulled the Falcons even with a three yard quarterback keeper.
After Wyatt Townsend connected from 24 yards out to put the Swedes back on top, a one yard touchdown run by McShan gave the Falcons the lead before a Jason Weah (SO/Madison, Wis. ) interception led to a 23 yard field by Navarro that made it 17-10.
The Swedes would then tie the score heading into the break on a two yard run by quarterback Austin Denson.
Then on their first possession of the second half, the second touchdown connection between Denson and Rodney Molette put Bethany in front 24-17.
Later in the period, Quincy Brown (SR/Redding, Calif. ) helped the Falcons tie it once again with a 38 yard run to the Bethany 28 and then a one yard scoring carry at the 7:06 mark.
The score stayed that way until Denson found Darren Rittwage for a 68 yard score with 8:04 left in the fourth to temporarily put the Swedes back in front.
Dan Dawdy (JR/Haysville, Kan.) and Stewart were both effective in their time behind center today for the Falcons. Dawdy completed 14 passes for 83 yards, with Stewart throwing for 120 yards along with 36 yards on the ground with the one touchdown.
Brown led the Falcons with 94 rushing yards, the second biggest total of his career. Juan Salazar (JR/Vernon, Texas) gained a career-best 49 rushing yards, with McShan adding 47 yards on the ground. McShan also had five catches for 36 yards, while Michael Evans (JR/Inglewood, Calif.) had three receptions for a team-high 40 yards.
Denson had 314 yards passing with three touchdown passes, but also threw three interceptions.
The Swedes also got 100 yard receiving performances from Molette (103) and Rittwage (101).
Jeremiah Pharms (SR/Stockton, Calif. ) led the Falcons (2-7, 2-7 KCAC) with six tackles, while Weah, Nick White (JR/Covington, Ga. ) and David Akao (SO/Wichita, Kan.) each pulled down an interception. Jacquez Davis (FR/Daytona Beach, Fla.) and Robert Garcia (JR/Wichita, Kan.) also each recorded a sack for Friends.
The Swedes (2-6, 2-6 KCAC) got a game-high 17 tackles from Jeron Caraway and 16 stops by Oscar Scott.
The Falcons will now wrap up the 2019 season next Saturday (Nov. 9) at Ottawa University, with a 1:00 pm kickoff in Ottawa, Kan.

“This group has been capable of winning games for weeks, but unfortunately we haven’t done enough to finish people off when we had the opportunity,” Meneley said. “A lot of guys had big days for us and I am very happy our kids get to enjoy the feeling of winning again.”