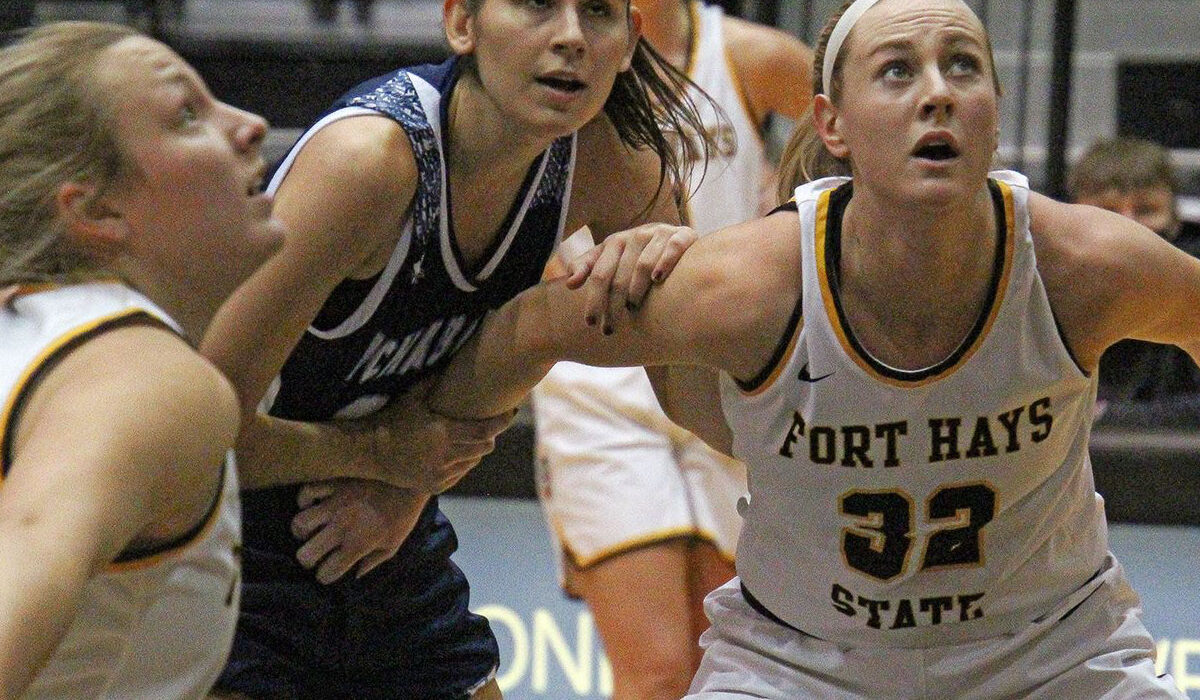 HAYS – Behind a 10-0 run over the final five minutes, 21 seconds, the Fort Hays State women’s basketball team battled back to defeat Washburn in the opening game of the 2020-21 season Tuesday (Dec. 1), 75-69. Senior Whitney Randall led the way with a career-high 26 points, while freshman Katie Wagner impressed in her Tiger debut with 17 points and a team-high eight rebounds.

The Tigers and Ichabods went back-and-forth in the opening quarter, trading the lead six times. After freshman Olivia Hollenbeck won the opening tip, Jaden Hobbs got things rolling with a 10-foot jumper. Two minutes later Randall got on the board for the first time with a right-handed finish, her first of nine points in the opening quarter.

Washburn took control with an 8-0 run over the heart of the quarter before Randall ended the run with a pair of free throws. The Alva, Okla. senior pushed the Tigers back in front later in the frame with a triple from the top of the key. The Ichabods responded with another basket but Hollenbeck gave the Tigers a 20-19 lead at the end of the quarter with a put-back layup that just beat the buzzer.

The visitors fought back in the second quarter, outscoring the Tigers by four to take a 38-35 lead into the locker room.

The Tigers needed several clutch 3-pointers in the second half to keep pace with the Ichabods. Sydney Golladay buried a long-range attempt off a pass from Hobbs two minutes into the frame to give the Tigers a one-point lead before WU went back up by four. Lauryn Reither responded with a big triple of her own at the 5:52 mark, putting FHSU in front 47-46. Wagner scored the final three points for the Tigers in the quarter, closing the gap to two late before a Hunter Bentley jumper gave the Ichabods a 58-54 lead after three frames.

Washburn took its largest lead of the game two minutes into the fourth period thanks to five quick points from Nuria Barrientos. Wagner came up with a big play on the ensuing possession, grabbing an offensive rebound and turning it into three points after a layup through contact and a free throw, helping the Tigers close within 65-62.

WU went back in front by four at the 5:21 mark, but the Tiger defense locked down over the final stretch. The Ichabods missed their final six shots in addition to a pair of turnovers, allowing FHSU to complete the comeback.

Hobbs hit the final clutch 3-pointer for the Tigers, trimming the deficit to one with 4:54 on the clock. Randall followed with layups on back-to-back possessions, pushing the Tigers in front by three, 72-69.

Randall’s second layup at the 2:57 mark proved to be the final field goal of the game for either team. The Tiger defense forced three misses and one turnover over the final three minutes while Cydney Bergmann hit 3-of-4 crucial free throws in the final minute to seal the win.

After being outrebounded by four in the first half, the Tigers dominated on the boards after halftime, outrebounding WU 20-12. Hollenbeck and Randall protected the paint for the Tigers, blocking three shots apiece, helping FHSU outscore the Ichabods in the paint, 40-28.

Fort Hays State knocked down 43.8 percent from the floor on the night (28-of-64) while allowing the Ichabods to hit 28-of-61 shots (45.9 percent). The lead changed hands 14 times on the night while there were eight ties. Neither team led by more than six.

The four true freshman to play for FHSU combined for 31 points in their first game in black and gold (Wagner 17, Hollenbeck 7, Sallach 4, Golladay 3).

Hollenbeck and Reither led the team with three assists each, while Wagner poked away three steals.

Golladay and Hollenbeck are the first pair of true freshman to appear in the starting lineup of the opening game of a season during FHSU’s NCAA DII era, dating back to 1991. Only 10 other true freshman have started their first game as a Tiger during that span.

The Tigers are next scheduled to hit the floor Saturday (Dec. 5) when they make the short trip north to battle Nebraska-Kearney. First tip is slated for 2 p.m. from the Health and Sports Center.