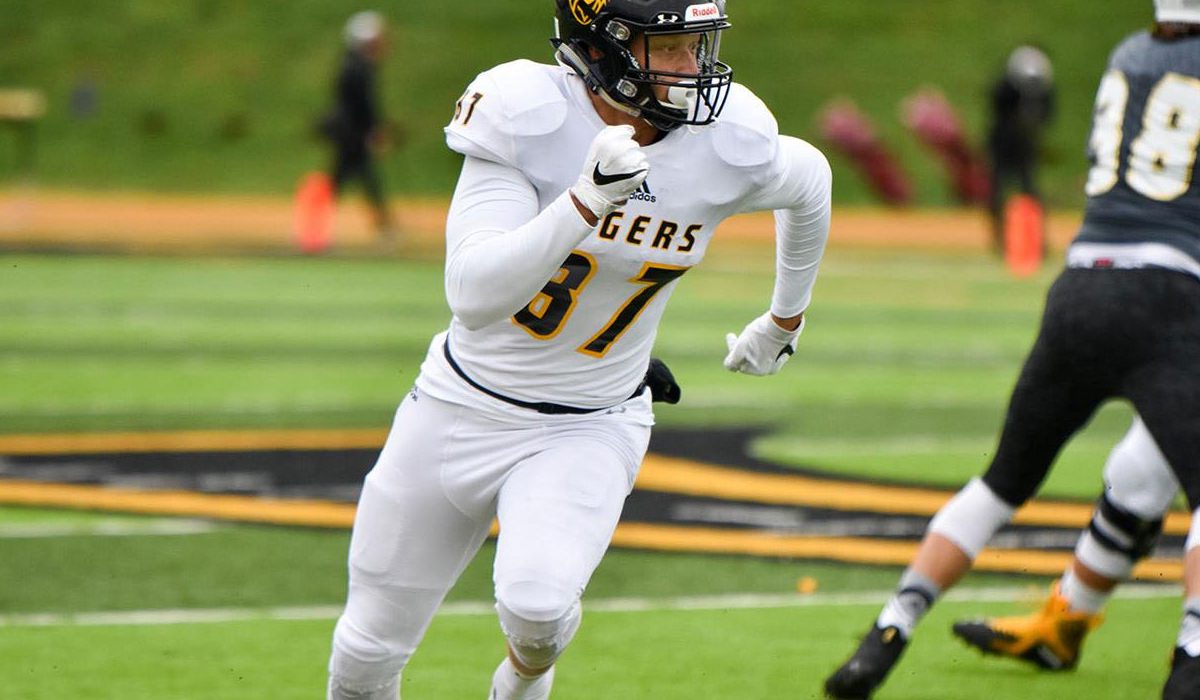 KEARNEY, Neb. – Fort Hays State used two overtime field goals from Dante Brown to escape with a 29-26 double overtime win at Nebraska-Kearney on Saturday (Oct. 20). The Tigers improved to 6-2 on the season, keeping their hopes alive for a second straight MIAA Championship, while the Lopers dropped to 4-4.

The Tigers definitely could have won the game in regulation, but a missed tackle on fourth down near midfield and dropped a pass that could have been an easy interception in the endzone with two seconds remaining. That allowed the Lopers to kick a game-tying 39-yard field goal as time expired. Dante Brown had just put the Tigers up 23-20 on a 46-yard field goal with 42 seconds remaining, but the defense could not seal the deal in regulation.

The Tiger defense came up big on the first two plays of the second overtime session. Jose Delgado recorded a tackle for a two-yard loss and Doyin Jibowu thwarted a pass out in the flat with a tackle for a one-yard loss. The Lopers gained nine yards on third down, but a Covarrubias 36-yard field goal on fourth down sailed just wide to the right. FHSU methodically worked the ball down to the UNK 9-yard line and Brown came on to nail a 26-yard field goal to win the game, going a perfect 5-of-5 on attempts for the afternoon. With the field goal, Brown pushed his nation-leading field goal total to 20 and broke the FHSU single-season record of 16 in the process, owned by his predecessor Brandon Brown.

Fort Hays State got out to a hot start in the game, marching 75 yards on nine plays for a touchdown. D.J. Hickman punched the ball in from two yards out. But UNK quickly neutralized the momentum with a 98-yard kick return for a touchdown by Darrius Webb.

The Lopers took their first lead of the game in the second quarter on a Luke Qunn two-yard touchdown run with 6:32 on the clock. The Tigers pulled within four at the half with a 22-yard field goal from Brown as time expired. UNK led 14-10.

The Lopers pushed their lead out to seven again with a 26-yard field goal from Covarrubias at the 10:06 mark of the third quarter and led 17-10 by the end of the period. The Tigers knotted the game up early in the fourth on a four-yard touchdown run by Harley Hazlettto cap a 13-play, 83-yard drive.
From that point, it was a back-and-forth battle of field goals. Brown knocked through a 47-yarder with 11:15 remaining. Covarrubias of UNK answered with a 42-yarder with 2:36 remaining. Then the teams traded the aforementioned field goals inside a minute remaining in the game to force overtime.

FHSU finished with 370 yards of total offense and limited UNK to 332. Like the week prior where FHSU held Pittsburg State to about 50 yards under its season, the Tigers did the same to the Lopers on Saturday. The Lopers entered the game averaging 279.4 rushing yards per game and the Tigers held them to 229.

D.J. Hickman recorded his first 100-yard rushing game as a Tiger with 111 yards on 24 carries. Jacob Mezera threw for 194 yards, completing 20-of-34 attempts. Harley Hazlett produced over 100 all-purpose yards (107), catching nine passes for 93 yards and rushing for 14 yards on six carries with a touchdown. Connor Shedeed (12) and Jose Delgado (10) led the tackling effort for the Tigers, both in double figures.

Darrius Webb did the most damage for the Lopers, adding 149 rushing yards along with his 98-yard kick return for a touchdown. Quarterback Alex McGinnis completed 9-of-25 attempts for 103 passing yards. Trey Richards had four catches for 63 yards. Sal Silvio led the UNK defensive effort with 17 tackles.

With the win, Fort Hays State head coach Chris Brown is tied for the all-time lead in wins at FHSU with 55, joining Bob Cortese. He has a chance to break the record next Saturday (Oct. 27) in Hays when the Tigers host Lindenwood University at 2 pm.