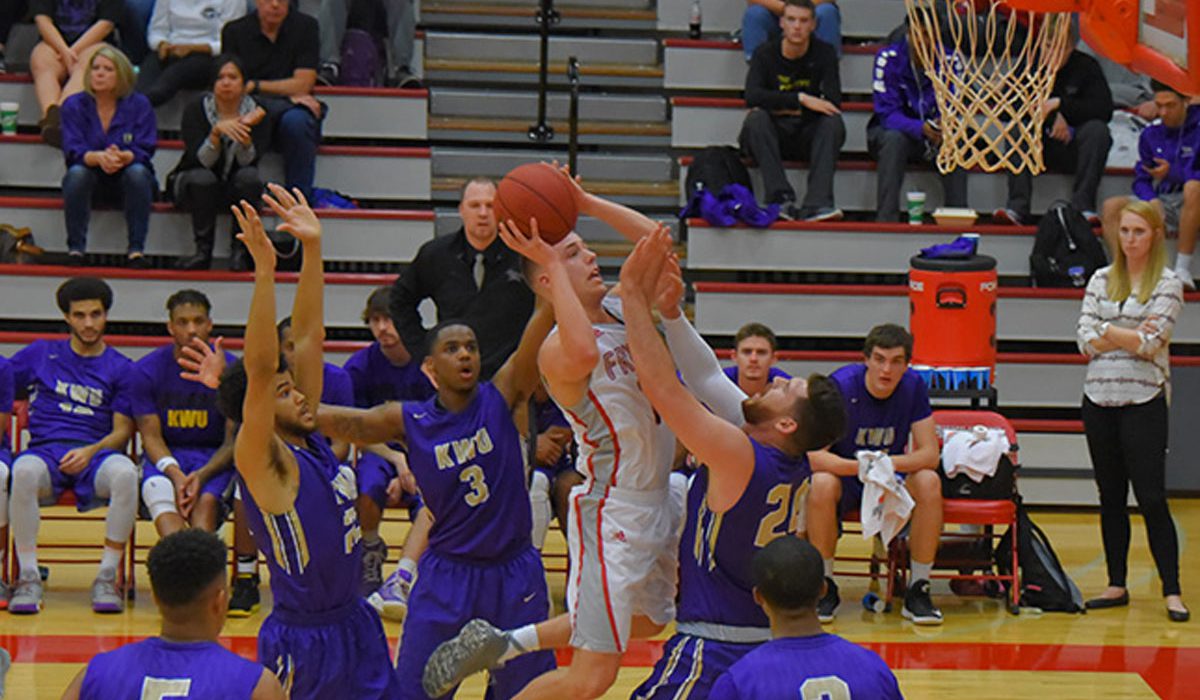 WICHITA, Kan. – The game result didn’t turn out the way the Friends University Men’s Basketball team wanted on Saturday night, but history was still made. The Falcons fell 81-78 to Kansas Wesleyan University (KWU) despite a furious comeback, but Toby Baxter (SR/Wichita, Kan.) moved into the No. 1 spot on the program’s all-time scoring list.

KWU raced out to an 8-0 lead as Friends missed on their first several shot attempts and the Coyotes dominate the defensive glass. They found their footing as they started to hit jump shots early on but couldn’t get key stops and continued to trail.

Friends (15-15, 11-11 KCAC) took their first lead with 9:29 left in the first half as KWU (13-17, 9-13 KCAC) called a timeout with free throws looming for Atir Cherne (SO/Wichita, Kan.). The Coyotes were settling for bad shots on one end, prompting run outs on the other. The Falcons were finding their stride making five of their previous eight field goals.

The rest of the half was back and forth as the Coyotes led by four, 42-38 at the half. The lead changed 12 times in the first. Baxter led the Falcons in scoring with 17 points. Ryan Hill of KWU led all scorers with 20.

The score stayed between nine and 11 for the next 10 minutes as the Falcons trailed 74-66 with three minutes to go before Friends made a late surge.

After trailing 77-66 with 2:46 remaining, Friends got back-to-back buckets and a free throw by Baxter and a three by Zach Osborn (SR/Derby, Kan.) to pull within three (79-76) with 40 seconds on the clock. A stop at the defensive end gave the Falcons the ball with seven seconds remaining, but they would try for a quick two points with under five seconds left. KWU would hit both free throws after getting fouled inbounding the ball, and a desperation attempt to tie at the buzzer would be off the mark.

Baxter finished with a game-high 36 points, giving him 1,593 in his career and making him the leading scorer in Falcon Men’s Basketball history.

“He’s been consistent from day one,” Friends Head Coach Dale Faber said of Baxter. “He’s a great young man and every day I know what I’m going to get from Toby.”

The Falcons earned the No. 5 seed in the KCAC Tournament, and will travel to Winfield to take on No. 4 Southwestern on Wednesday, February 22nd for the tournament quarterfinals. Tip-off is scheduled for 7:00pm.