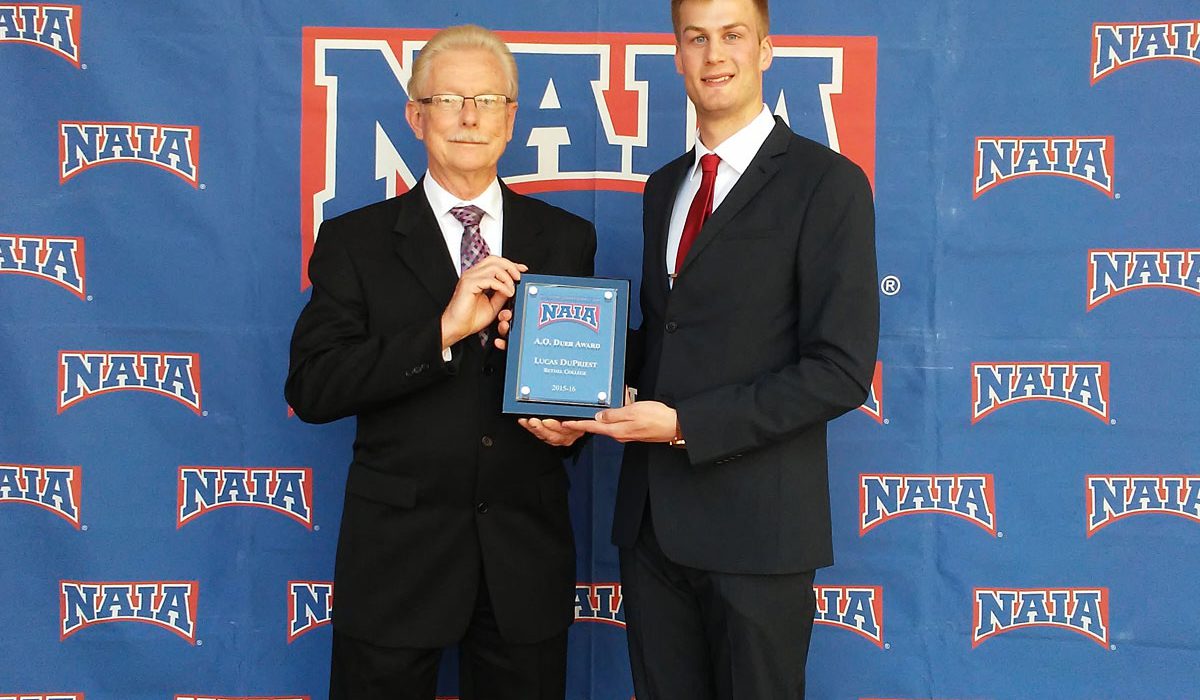 Honorees were first announced as part of the association’s annual NAIA National Awards Day in September 2016. Among these award recipients was Lucas DuPriest (SR/Fjaras, Sweden), who was selected for the “A.O. Duer Scholarship Award,” given to student-athletes who are strong academically, have sound character, and demonstrate solid citizenship.

DuPriest and Faculty Athletic Representative Merle Schlabaugh flew out to San Diego to be there for the awards ceremony. DuPriest understands what this type of award means, and doesn’t take it lightly.

“Winning an award is always special, and receiving the A.O. Duer Scholarship is obviously especially significant,” DuPriest said. “The scholarship, the travel to San Diego, and the awards ceremony has been a once in a lifetime experience. I could not be more thankful to all of those who wrote recommendation letters; they are the reason I was able to receive this award.

DuPriest is the second Thresher to be given this award, with David Lusk being the first back in 1991.

“What a great honor it is to be here today.

First, to all the others that have received an award today, I would like to congratulate all of you as well and wish you best wishes for continued success.

Second, I would also like to acknowledge all of those who work equally, or perhaps even harder, than most of us do, but have not received an official recognition. They deserve our sincere and wholehearted acknowledgement, as well.

Third, I would like to thank everyone who has helped me through my four years at Bethel College. Especially Merle Schalabaugh, who is here today, and who nominated me for this award. I would not be standing here today if it wasn’t for Merle;

Brennan Peackock and Clark Oswald who were my coaches both in life and on the soccer pitch;

Doug Lengel and the staff and the Kanasas Institute for Peace and Conflict Resolution who gave me an opportunity to work for the them;

Mark Jantzen and Kip Wedel, my history professors, who challenge me in the classroom on a daily basis;

my father who watches my games online through somewhat shaky feeds, and who has traveled across the world to watch me play;

my mom for her unconditional support, encouragement, and love;

my sister for for believing in me, and her support;

There are countless others to name, including the NAIA and the KCAC, but I extend my thank you to the vast Bethel College community. Receiving this award would not have been possible without their great support.