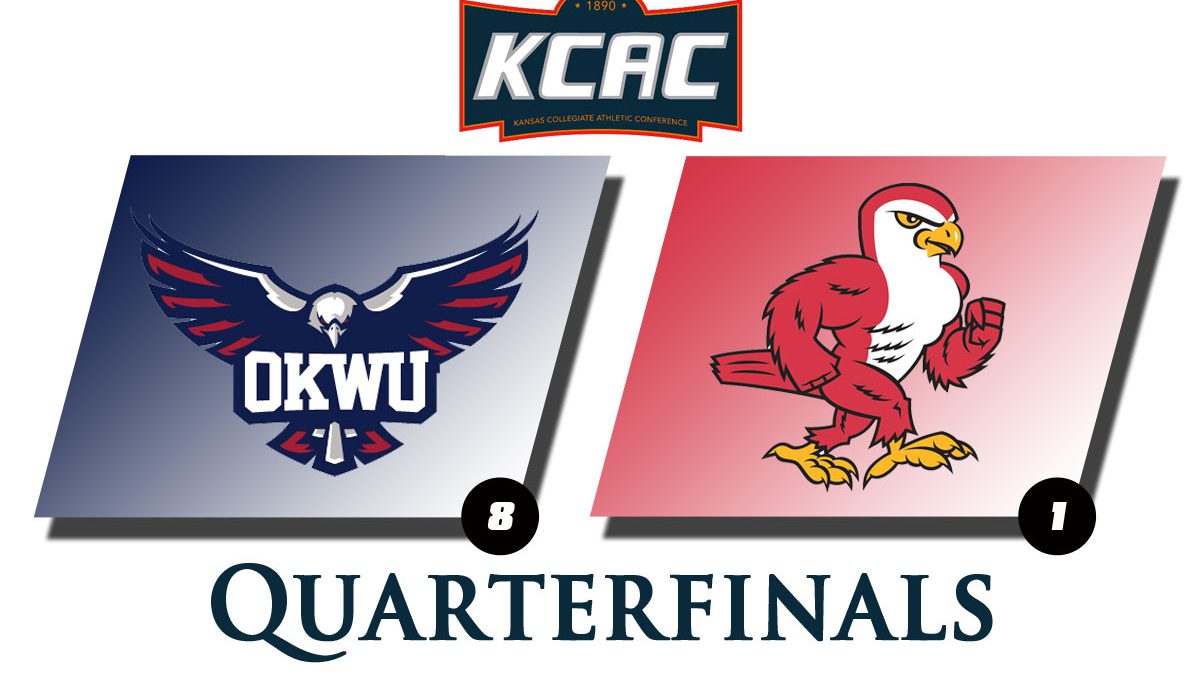 WICHITA – No. 11 Friends University Women’s Basketball overcame a slow start in Thursday’s KCAC Tournament Quarterfinal. The Falcons recovered from a six-point deficit after the first quarter to blowout Oklahoma Wesleyan (OKWU) 76-45 inside the Garvey P.E. Center.

Shann Sellers (SR/Dallas, Texas) scored the first four points off the game on layups off of steals by April Quiroz (JR/El Paso, Texas) and herself, but Friends (26-4) struggled from the field the rest of the first quarter after that. The Falcons were just 4-for-15 on shots the rest of the period (including an 0-for-4 mark from distance) as they found themselves down 19-13 after the opening period. Betty Akathiotou (JR/Nicosia, Cyprus) scored the last points for the team with 4:16 on the clock.

The Falcons finally hit their first 3-pointer just six seconds into the second as Quiroz got them on the board there. Lexi Evans (SO/Austin, Texas) followed with a make from deep and Sellers tied the game 20-20 on a 7-0 run with 7:06 left in the half. A triple by OKWU (14-17) at 3:27 would be their last points of the half and their last lead of the game as Makenzie Vining (JR/Caney, Kan.) tied it on the next Falcon possession and Sellers put them ahead for good at the free throw line after that. Macy Lozen (JR/Austin, Texas) added a jumper for a 29-25 Friends advantage at the half.

Yowana Posey (JR/Chicago, Ill.), in foul trouble in the first half, playing just nine minutes, scored back-to-back buckets to start the third quarter, and Vining and Akathiotou followed with back-to-back threes to give the Falcons their first double-digit lead of the game at 39-29 with 5:54 left in the period. The Eagles had a mini-run, getting back to within five, but Friends quickly pushed the lead back up to 10 and they led 51-38 into the final period.

The Falcons put the game away with a 14-0 spurt to start the fourth, including three straight steal-and-layups by Sellers as part of a personal 8-0 run for the All-American. Evans hit a 3-pointer with 3:51 remaining, giving her 92 on the season to break the Falcon single-season record and putting Friends up 30 (70-40). Vining and Ashley Seaton (SR/Chicago, Ill.) added threes after that to give Friends their biggest lead of the game at 76-40 with 2:17 on the clock before OKWU scored the final five points of the contest.

Sellers recorded her second triple-double in the last couple of weeks, going for 24 points, 11 steals, and 10 rebounds. She added in six assists. Vining notched her first career double-double, scoring 12 points and adding in a career-high 13 rebounds. Akathiotou (11) and Posey (10) also scored in double figures.

The Falcons didn’t force as many turnovers as normal (averaging 26 per game and forcing 20 Thursday), but they made the most of them, scoring 31 points off the miscues. OKWU only scored nine points off of 12 Friends turnovers.

With the win, the Falcons advance to the KCAC Tournament Semifinals. They will take on Kansas Wesleyan, the No. 4 seed, for the second time in three games. Friends defeated the Coyotes 81-57 on Senior Night last week. The semifinal matchup will take place at 7:00pm on Saturday, February 25th back in Wichita. The winner will advance to the KCAC Championship on Monday.