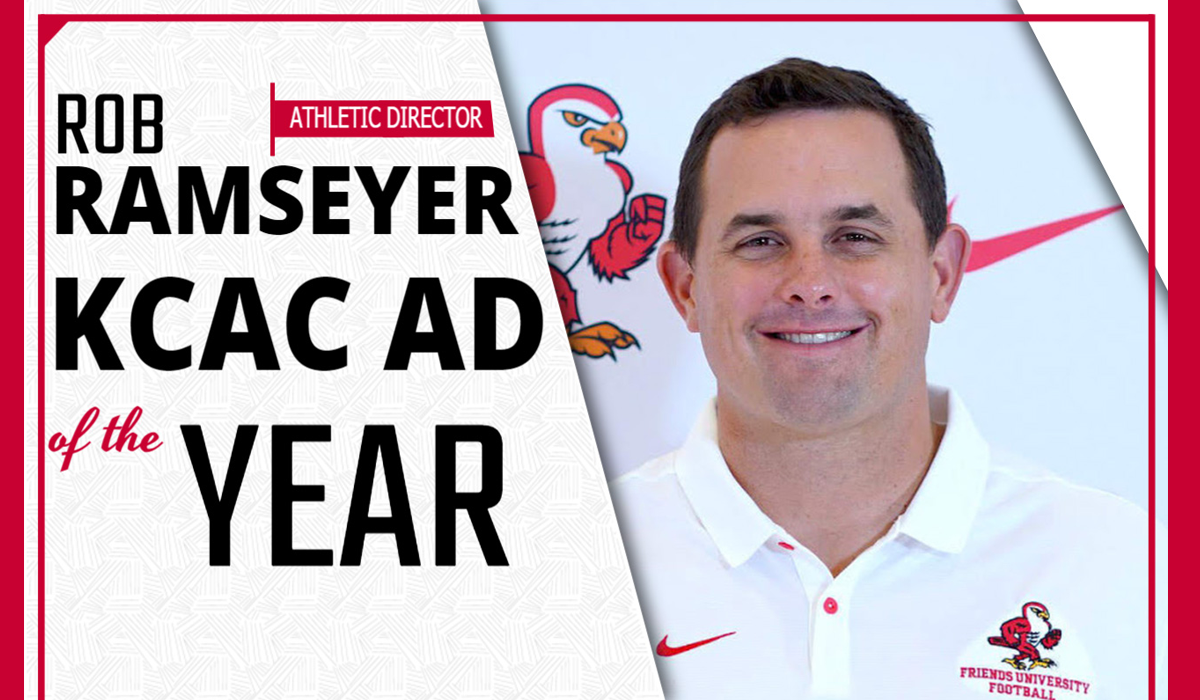 WICHITA, Kan. – Friends University Athletic Director, Dr. Rob Ramseyer, has been chosen as this year’s KCAC Athletic Director of the Year, the league announced Monday.  Ramseyer will be formally recognized at the Sport Management Conference, held on August 4 at Bethel College.

“We are thrilled that Rob has been named the KCAC Athletic Director of the Year,” said Dr. Amy Bragg Carey, Friends University President. “Rob is a gifted and capable leader that has, in a short period of time, built an excellent team of coaches and administrators with depth of experience and passion for Falcon athletics. He’s a dedicated professional that garners a great deal of respect from his colleagues and is a champion for our student athletes and our mission. This is a very well-deserved honor and we are blessed to have Rob at Friends University.”
Falcon Athletics has made tremendous strides both on the playing surface and in the classroom during Ramseyer’s two-year tenure at Friends.
This season, the Men’s Soccer Falcons captured the KCAC tournament championship for the first time since 2007 while qualifying for the NAIA National Tournament. The Women’s Soccer Falcons also advanced to the NAIA tourney for the first time in 15 years, while the Women’s Indoor Track & Field Falcons kept their dynasty ticking by claiming the KCAC Indoor Championship, their combined 11th straight conference title spanning both the indoor and outdoor seasons.
On the academic side, the Falcons boasted a cumulative GPA of 3.24 this past season.  The programs also had solid representation on the KCAC Scholar Athlete list, including leading the conference in Women’s Indoor and Outdoor Track & Field, Volleyball, Women’s Tennis and Baseball.
“I am honored and grateful to receive this award,” Ramseyer said.  “There are many great Athletic Directors in this conference and to be selected by them is humbling.  However, AD’s receive these awards because they work with good people.  We have dedicated student-athletes, great coaches and athletic staff, and a supportive University administration. I am proud of what we have been able to accomplish together.”
Under Ramseyer, the Athletic Department has now added a Graduate Assistant Intern program, supplying the Falcon athletic programs with a graduate assistant intern coach. The program also includes an Administrative and Sports Information Graduate Assistant Intern.
An intern program with the Fellowship of Christian Athletes (FCA) is another addition that Ramseyer overseen. This agreement allows for scholarship money to be available for FCA students at Friends while also providing an FCA staff member on campus for 20 hours per week to assist with mentoring the FCA student interns and connecting with student-athletes.
Ramseyer also facilitated a partnership between Friends University and the City of Wichita for use of the West Side Athletic Field.  Now the permanent home of the Baseball Falcons, Friends University has overseen improvements to the field, including installing artificial turf on the infield.
This past fall, a new IronTurf was installed on Adair-Austin Stadium, meaning the Falcons joined the New England Patriots and Sporting KC of the MLS on the short list of teams that sport the new turf.
Ramseyer also helped to initiate the addition of a Powerlifting program along with new Director of Strength and Conditioning coach Joe Belden.