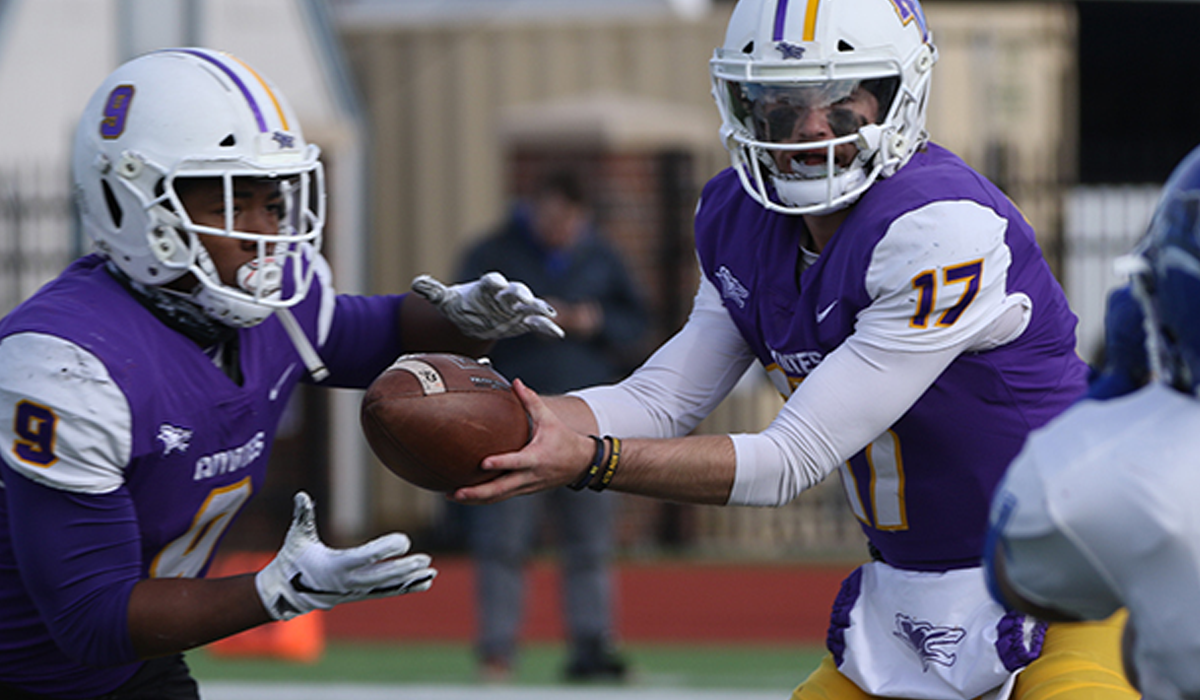 The pain of Kansas Wesleyan’s magical season and his magnificent college career coming to an end abrupt end had to be processed first and foremost.

“It’ll be good to look back on it once it’s all said and done, but I’m going to think about this for a little bit,” Feauto said following the No. 3 Coyotes 35-24 loss to No. 6 Lindsey Wilson (Ky.) in a quarterfinal game of the NAIA Football Championship Series on Saturday afternoon at windswept Graves Family Sports Complex. “We could have won this game and this isn’t where we wanted to be.”

KWU’s 25-2 record the last two seasons that includes a 20-0 record in the Kansas Conference and 3-2 record in NAIA postseason play, is unprecedented in program history. There’s also the extensive list of team and individual, and school and conference records the Coyotes shattered along the way.

Those numbers and their accomplishments will gradually move forward in their collective conscience once the shock and agony of Saturday’s loss subsides.

The end came against a Lindsey Wilson team that featured a potent and balanced offensive attack, and a defense that relentlessly pressured Feauto and blanketed his receivers.

Blue Raider quarterback Cameron Dukes shook off a first quarter knee injury that sidelined him briefly and threw three touchdown passes, ran for another and kept his team in the lead the entire game. Running back Jaylen Boyd added 155 yards rushing and a touchdown as Lindsey Wilson improved to 12-0.

“Their quarterback is an incredible player and he’s tough,” KWU coach Myers Hendrickson said. “I think he was playing injured, he got banged up then came back in the game. We saw that on film and knew that’s who we’re going against and that’s what he was today. He was very, very good.”

Dukes had to be helped off the field with 4:37 left in the first quarter and appeared to be done for the day, but returned in the second quarter after missing one series and promptly threw two touchdown passes – the second a pivotal 10-yarder to Terrill Cole Jr. with 8 seconds left in the half that gave Lindsey Wilson a 21-10 halftime lead.

The play capped quick a 55-yard, nine-play drive that took just 1 minute, 11 seconds and came after the Coyotes had scored on Demarco Prewitt (SR/Menifee, Calif.)’s 3-yard run with 1:20 left in the half.

“That was really too bad they got that quick one,” Hendrickson said. “We scored right away to start the third quarter, I think it’s a different game if they don’t have 21 at half. That was big for them. The defense had played so good and to have 21 on the scoreboard at halftime was kind of a tough deal.”

The Coyotes (12-1) got within four twice the second half, but Lindsey Wilson answered with a touchdown each time.

Feauto, who had 66 yards passing the first half, hit Richard McCauley (SR/Edmond, Okla.) with a 4-yard touchdown pass with 10:29 left in the third quarter, making it 21-17 but Boyd, a hard-charging junior, scored from 22 yards out on the Blue Raiders’ next possession.

After holding Lindsey Wilson on downs the Coyotes drove to the Blue Raiders’ 12-yard line, but turned the ball over on downs at the 19 with 6:17 left in the game.

“It’s hard to say that we lost, I feel like we ran out of time,” Hendrickson said. “If we could have kept going I believe in this offense and this defense, we’d have found a way to do it.”

Feauto said his sore right hand, which he injured a month earlier, wasn’t a factor. He completed 16 of 34 passes for 212 yards, one touchdown and was sacked three times in the final game of his storied career. He departs having thrown for 7,362 yards and 90 touchdowns in just two seasons.

“They did a great job,” Feauto said of the Blue Raiders’ defense. “Their D-line was fast, they got to me pretty well and did a good job in coverage. You’ve got to tip your hat to that defense.”

Prewitt ended his historic four-year career with 111 yards rushing on 31 carries, two touchdowns and exits as the leading rusher in program history with 4,701 yards and 84 total touchdowns – 77 rushing. Poe-Evans bows out with 169 receptions for 2,758 yards and 48 touchdowns in four years.

Dukes, a junior, was 16 of 27 for 192 yards and was sacked twice by Shaq Bradford (SR/San Diego, Calif.) in the final game of his stellar career. He finished the season with 21 sacks and had 43 during his two years at Wesleyan.

“They executed and did a good job with what they wanted to do,” Bradford said. “They did a great job answering every time we’d get a big play and try to get momentum on our side. A lot of credit to them guys over there.”

“They have weapons all over,” Hendrickson said. “When you make it to the final eight in the country everybody’s going to be good. I thought it was two outstanding teams playing.”

“I love this team, love these guys and we played to the end,” Feauto said.