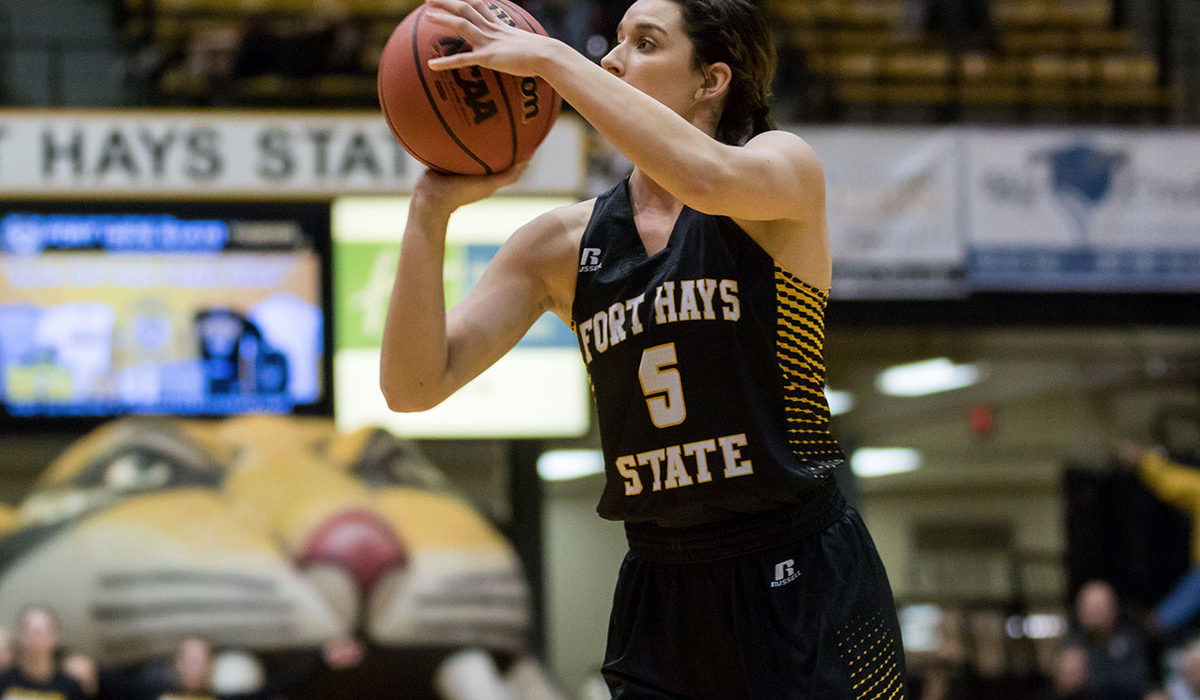 PITTSBURG – The fifth-ranked Fort Hays State women’s basketball team secured its eighth-straight 20-win season with a dominant performance Thursday against Pittsburg State, defeating the Gorillas, 78-53. It was the first win for the Tigers in Pittsburg in nearly a decade (2/26/09), ending an eight-game losing streak to PSU on the road.

The Tigers improve to 20-1 on the year and 11-1 in MIAA play, while the Gorillas dip to 17-5 overall and 9-4 in league action. After reaching the 20-win mark eight times in their first 42 years in existence, the Tigers have now reached the milestone each of the last eight seasons. It is the longest active stretch in the MIAA.

Pittsburg State led by two in the opening minutes, but back-to-back three-pointers from Tatyana Legette and Lanie Page gave the Tigers the lead for good three minutes into the game. Fort Hays State later scored 13-straight points to go in front 25-10, fueled by five points from Belle Barbieri and triples from Page and Whitney Clampitt. Barbieri dominated in the paint early on, scoring nine points in the first 10 minutes of action.

Both teams shot the ball well in the second quarter, hitting a combined 13-of-28 from the floor (46.4 percent) including a 5-of-9 effort from behind the arc (55.6 percent). Taylor Rolfs was the only player to score for either team over a 90-second stretch, drilling consecutive three-pointers before dropping in a layup one possession later. A Kacey Kennett three-pointer stretched the Tiger lead to 16, 37-21, before the home team closed the half on an 8-3 run to close within 11 by halftime, 40-29.

The Gorillas closed within nine after scoring the first two points of the third quarter, but a 21-3 run over the final seven minutes of the stanza all but sealed the victory. The Tigers hit 7-of-12 during the run, highlighted by seven of Legette’s 12 points in the game. FHSU held the Gorillas scoreless over the final four minutes, 58 seconds, forcing three turnovers and seven missed field goals.

It was more of the same for the Tigers in the fourth quarter, who hit 50 percent of their shots to secure the win. Page totaled eight of her 14 points in the final frame, knocking down four of her five attempts from inside the arc.

The Tigers knocked down 50.0 percent from the floor in the victory (29-of-58), the fourth time they have made at least half of their shots this season. FHSU limited the Gorillas to a 35.1 percent effort from the field (20-57), their lowest shooting percentage in a conference contest this year.

Rolfs, who matched her career-high with 17 points, was joined in double figures by Page (14 points), Legette (12) and Barbieri (11). Legette added 11 rebounds for her fifth double-double of the year while blocking five shots for the second time this year.

The Tigers will wrap up their road trip Saturday (Feb. 9) when they take on Missouri Southern. First tip from Joplin, Mo. is scheduled for 1:30 p.m.