Ottawa, backed by the NAIA, the NFL and RCX, to launch women’s flag football 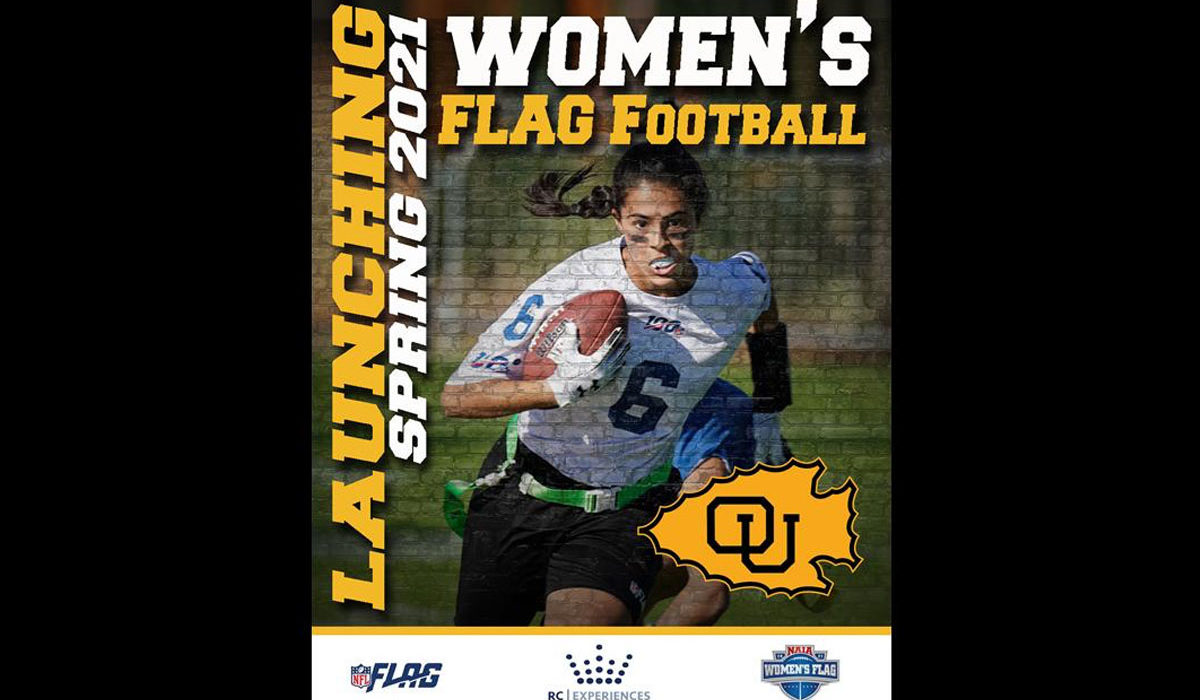 KANSAS CITY, Mo. – Women’s flag football is on its way to becoming an official National Association of Intercollegiate Athletics (NAIA) varsity sport by 2021, thanks to a two-year partnership between the NAIA, the National Football League (NFL) and Reigning Champs Experiences (RCX), the operator of NFL FLAG leagues nationwide.

Ottawa University is among the first schools in the NAIA to announce plans to add women’s flag football as a varsity sport. The Braves will open its first season in the spring of 2021. A second artificial turf field is currently under construction at Dick Peters Sports Complex. In preparation for the program and to further enhance its level of program commitment, OU has asked Mammoth Sports Construction to design and add official women’s flag football lines to the facility.

“We were immediately intrigued when we heard about the NAIA’s partnership with the NFL and RCX, and knew we wanted to be a part of this special and unique athletic offering,” said OU Director of Athletics Arabie Conner. “Increasing opportunities for students to participate in collegiate athletics has been critically important to our growth as an institution and our vibrancy as a campus community.  We are very much looking forward to adding this new spring women’s sport on campus, and helping with its growth and increased visibility in the Midwest. This is perfect timing, as we are under construction on a brand new turf field.”

With support from NFL FLAG and RCX, NAIA will work to develop league infrastructure and operations for the first women’s flag football competition governed by a collegiate athletics association.

“Football is for everyone,” said NFL Executive Vice President of Football Operations Troy Vincent. “This groundbreaking and historic joint venture provides an opportunity for the values, fun and competitive environment of football to be enjoyed as a varsity sport by female student-athletes attending NAIA institutions across America.”

As the official operating partner of NFL FLAG and the NAIA Showcases, RCX will help facilitate women’s collegiate flag football across the NAIA and drive participation through women’s flag football NAIA Showcases. The NAIA will host its first Showcase open to female football athletes in the late summer or early fall of 2020.

“Increasing female participation in flag football has been a top priority for NFL FLAG,” said Izell Reese, RCX President and General Manager. “By teaming up with the NAIA, we’re able to create even more opportunities for young women to continue the sport they love, and potentially receive scholarships to continue their education and compete at the next level.”

The NAIA will begin working with NFL FLAG and RCX immediately to outline competition guidelines and next steps for schools and conferences interested in instituting women’s flag. The first competitive season will be held in the spring of 2021.

“The NAIA is thrilled to partner with the NFL and RCX in launching women’s flag football,” said Jim Carr, NAIA president and CEO. “This is a fantastic opportunity for our members to expand their athletics programming with support from valuable partners like RCX and one of the most relevant and successful professional sports leagues in the world.”

The NAIA will host an emerging sport or invitational championship in the spring of 2022. An emerging sport in the NAIA is defined as at least 15 participating institutions, while invitational can be defined as at least 25. A sport must have a minimum of 40 participating institutions to be considered for full championship status.

In addition to the women’s flag football initiative, the NFL will serve as the presenting sponsor of the 2020 NAIA Football National Championship, scheduled for Saturday, Dec. 19, at Eddie G. Robinson Stadium at Grambling University in Louisiana.