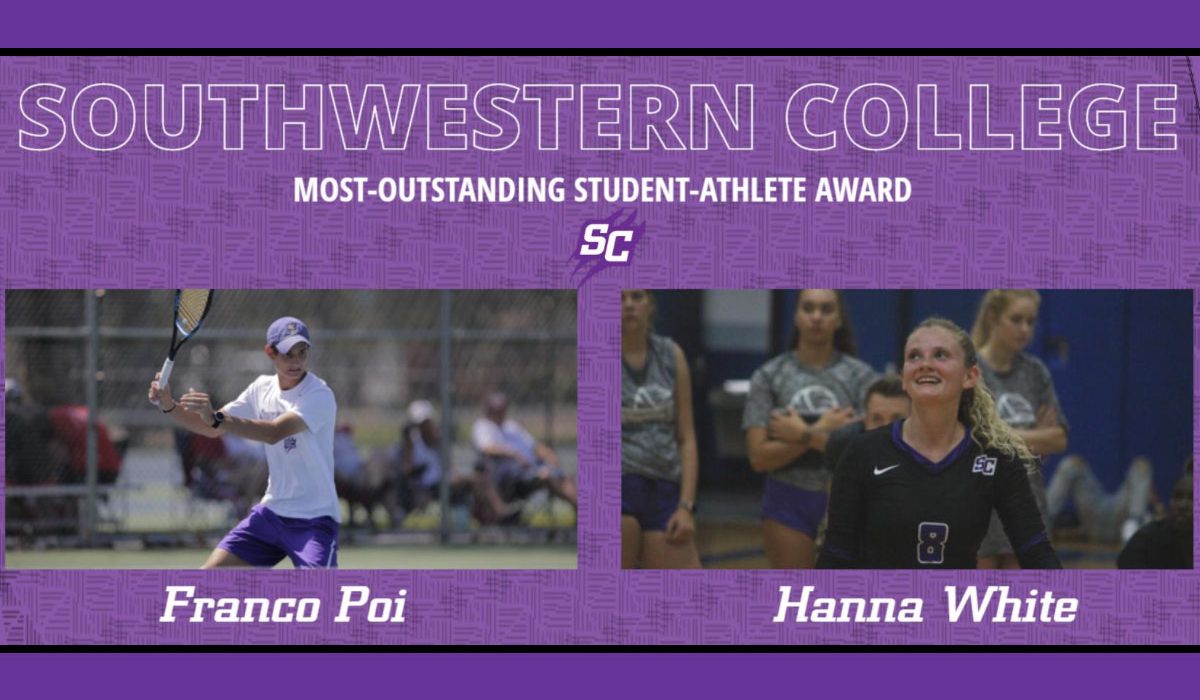 WINFIELD – Franco Poi of Southwestern College tennis and Emily (Hanna) White of volleyball have been named the recipients of the 2019-20 Most-Outstanding Student-Athlete Award, the school athletic department announced Tuesday.

The outstanding student-athlete award is given in memory of Tracy Young by Bill and Georgianna Young.  Tracy was in the class of 1982.  The award is presented to the top senior female and male student-athletes who demonstrate exceptional performance in athletics, academics, leadership, and college and community service.

Poi, a senior and four-year player with the tennis program from Cordoba, Argentina, was honored as the male recipient this year. A two-year captain of the Moundbuilder men’s tennis team, Poi was awarded All-KCAC honors three times and was also named the 2019 KCAC Player of the Year. In 2019, he helped lead the Builders to their first regular-season conference championship – the program’s first since 1970 and second ever. On an individual level, Poi has been ranked in the ITA NAIA central region all four years at Southwestern, finishing his career No. 16. He ends his tenure as one of the most winningest players in Southwestern history with a singles record of 65-33 and a doubles mark of 64-30.

Outside of tennis, Poi has helped give back to the program, serving as a tennis camp coach to go along with other leadership duties. He will be graduating with a degree in Business Administration and has made the Dean’s List every semester. Following graduation, Poi will attend Dallas Baptist University where he will work towards his MBA.

This year’s female winner, White, is a senior from Baxter Springs, Kansas who joined the volleyball team in 2018 after playing two years at Fort Scott CC. Instantly making a difference, White will leave Southwestern a part of two record-breaking seasons for the Lady Builders. In 2019, she was named the KCAC Defender of the Year after spending a majority of the season ranked in the top three nationally in digs. During her senior campaign, she racked up three KCAC Defensive Player of the Week honors which also helped her land the AVCA NAIA Regional Defender of the Year, the first in school history. She ended the 2019 season ranked second in the NAIA in digs per set at 6.58.

Outside of volleyball, White is an active member of the school and community. She was named one of Southwestern’s Scholars of the College this year and will be graduating with a dual degree in the education field. She has been a member of the Dean’s List every semester and was a captain on this year’s team that was named the KCAC Champion of Character. Following graduation, White will enter a new position at Hesston Middle School as their seventh-grade math teacher.

“Both Franco and Hanna are very deserving of this award,” athletic director Mike McCoy said of this year’s recipients. “Each of them defines what it is to be a Moundbuilder and I speak for everyone when I say we are very proud of them.”

For a recap of each of the nominees and their accomplishments, visit the Southwestern College social media pages for video submissions from the candidates. They can be found on the SC Athletics Facebook page and on Twitter at @buildersports.