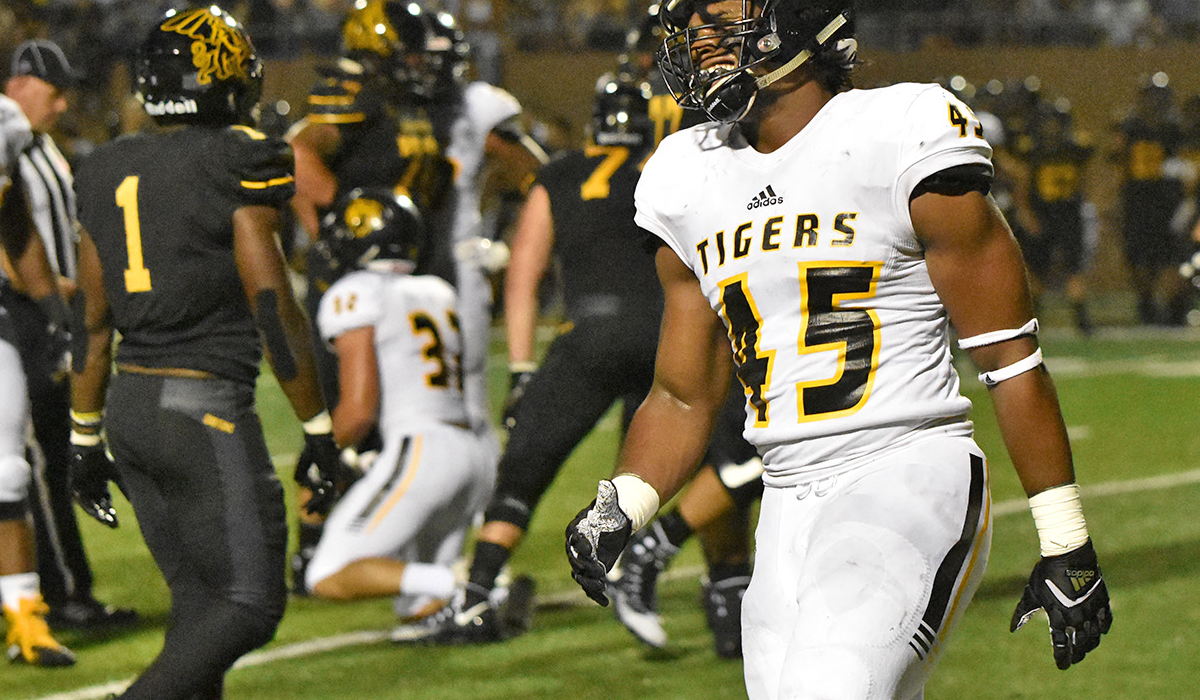 ST. JOSEPH, Mo. – Turnovers, special-team breakdowns, and miscues deep in Missouri Western territory were costly for No. 5 ranked Fort Hays State in a 23-13 loss at Missouri Western on Thursday night. The Tigers saw their 13-game win streak in MIAA play, dating back to 2016, snapped at the hands of a Griffon team that continued its home opener magic. The Griffons claimed their seventh straight home-opener win going back to the 2012 season, but their biggest in the stretch by netting a win against a top-five ranked team. The last two home opener losses by the Griffons were to teams that went on to win national titles (Pittsburg State in 2011 and Minnesota-Duluth in 2008).

The Tigers had several opportunities to score deep in Griffon territory throughout the game, but the Griffons came up with three interceptions inside the redzone that ultimately kept the Tigers from putting plenty of points on the board. The biggest interception arguably for the Griffons was a pass that went off the fingertips of Matt Wendelberger in the endzone on third down during the waning seconds of the first half, leaving the game tied 7-7 going into halftime.

The biggest disappointment may have been Fort Hays State’s inability to capitalize on 14 Griffon penalties that totaled 147 yards. The Tigers committed only three totaling 40 yards. The Griffons continued to give the Tigers opportunities, but the Tigers could not fully seize the opportunities.

Down by three in the third quarter, Mezera threw his third interception of the game picked off at the 1-yardline that thwarted another good Tiger drive. FHSU outgained MWSU by 68 total yards in the game, but a 3-1 advantage in turnovers was a huge difference maker for the Griffons.

Dante Brown knotted the score at 10-10 with a career-best 49-yard field goal at the 1:31 mark of the third quarter, but in the fourth quarter had one of the poorest punts in his career turn into the game-sealer for the Griffons. Brown had a low lined punt that went only three yards beyond the line of scrimmage before getting snared out of the air immediately by James Huskey and returned 27 yards for a touchdown with 8:58 remaining to push the Griffons to a 23-13 lead. It was a fitting way for the Griffons to cap a game ultimately won by their defense and special teams.

The Tigers struggled to find any rhythm on the ground early and it led to Mezera throwing the ball a career-high 62 times, but completing a career-high 34 passes. He threw for 338 of Fort Hays State’s 370 total yards in the game. The Tigers gained only 32 yards on the ground, the majority by Charles Tigner with 30 on nine attempts. Wendelberger finished with 103 receiving yards on seven catches, while Harley Hazlett had a team-high 12 catches for 86 yards.

The Griffons benefitted early from poor special teams coverage as Brandin Dandridge returned a punt 58 yards to set up a short 19-yard field for the Griffons. That led to a 7-0 advantage for the Griffons on a 13-yard run by quarterback Dom Marino just six minutes into the game.

A Mezera to Wendelberger connection of 20 yards accounted for the only Tiger touchdown on the night with 11:01 remaining in the second quarter.

The Griffons took a 17-10 lead early in the fourth quarter on a six-yard touchdown run by Derek Gray and the Tigers were on the verge of tying the score by getting the ball inside the Griffon 10-yardline. However, a wide open dropped pass at the goalline led to settling for a field goal and the Griffons kept the lead at 17-13. The aforementioned punt return for a touchdown was too much for the Tigers to overcome, though the Griffons missed the extra-point leaving the final margin at 23-13.

Marino led the Griffons with 74 rushing yards, while throwing for 78. Defensively, Jabbar Miles had two of the three interceptions for the Griffons, while Dandridge had one.

Fort Hays State plays host to Washburn next Saturday (Sept. 15) in Hays at 7 pm. Both teams will enter at 1-1 overall. Washburn is coming off a loss to No. 6 ranked Northwest Missouri State on Thursday evening.