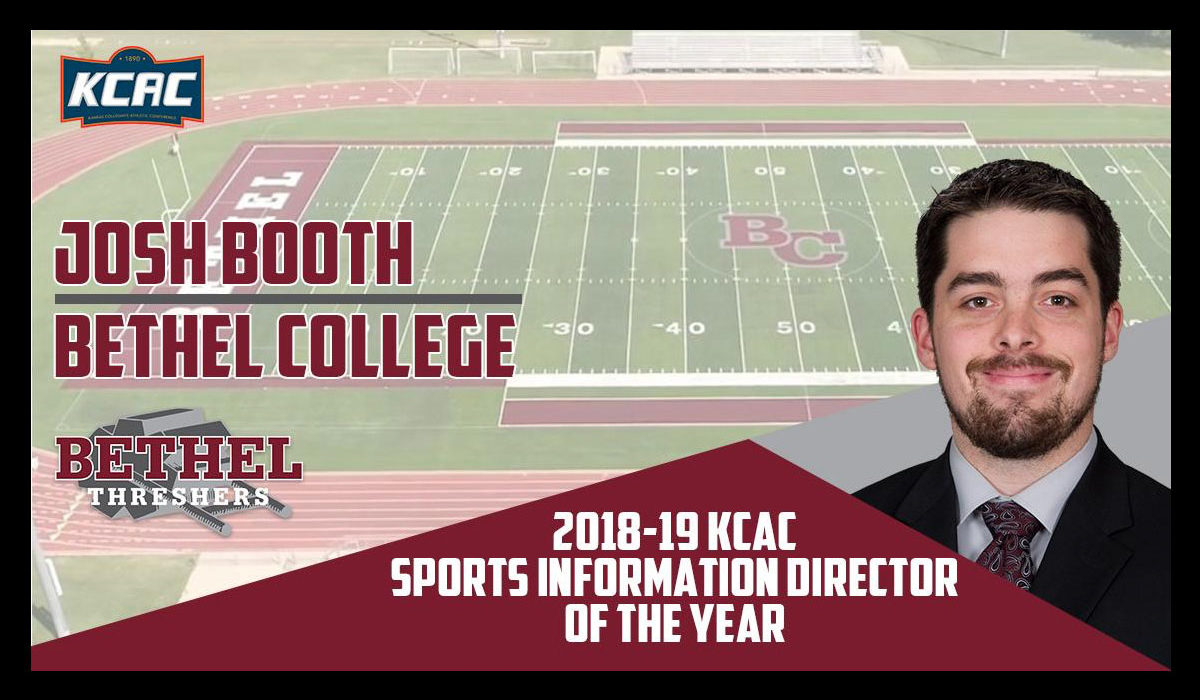 WICHITA – Josh Booth from Bethel College has been named Kansas Collegiate Athletic Conference Sports Information Director of the Year, the conference office announced Wednesday. Booth will be formally recognized at the Sport Management Conference, held on August 6 at Avila University.

Booth was hired as the first full-time SID at Bethel College in 2016, and has been the primarty media contact, statistician, and historian for the Threshers’ 15 sports. In his three years at Bethel, Booth has earned top-10 finishes in the NAIA-SIDA Most Twitter Followers Gained, Most Instagram Followers Gained, and Website Rating, while also winning the 2018 Digital Media Contest for Most Facebook Likes Gained.

“There are people who show up to work and do what they are told within their job,” Bethel Director of Athletics, Tony Hoops said. “Then there are people who show up and invest everything they have each day into their job because it is their passion. Josh is that passionate individual and is essentially the backbone of our athletic department. He is more than just our SID, Josh is a figurehead of Bethel Athletics within our campus.”

At the conference level, Booth helped stat the KCAC Volleyball Championship, provided livestream for both Men’s and Women’s Cross Country Championships, took stats for the KCAC women’s soccer quarterfinals, was the shot clock operator for Championship Monday, and provided play-by-play commentary for several games at the softball tournament in Great Bend.

Nationally, Booth provided play-by-play commentary for the NAIA Softball Opening Round games in Dodge City, is a member of the NAIA Branding Committee, and was an NAIA-SIDA Webinar panelist. Booth is also a member of the CoSIDA Academic All-America New Media Committee.